An athlete and his money: not easily parted 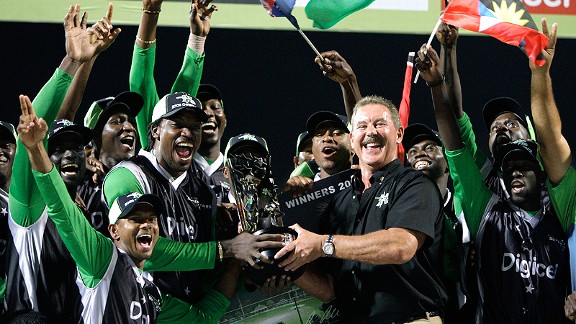 AP Photo/Andres LeightonAllen Stanford, front right, presents the trophy to the Stanford Superstars after they won the Stanford 20/20 for 20 cricket match in 2008. It was the richest cricket match of all time, with a total prize pool of $20 million.

A handful of athletes and sports promoters across the globe likely have turned their attention to Houston the past few weeks, as they keep tabs on the trial of financier and sports sponsor R. Allen Stanford, which is playing out before a federal jury.

Stanford is facing a long list of federal fraud charges stemming from what prosecutors say was the reckless misuse of at least $7 billion in investors' money in a giant Ponzi scheme. Authorities allege that Stanford also used investors' funds to support his lavish lifestyle and personal pet projects, including the sponsorship of several high-profile cricket matches. The case is in its third week in court.

Among his many celebrity friends, Stanford was tight with PGA golfer Vijay Singh, whose name recently came up during trial in reference to Stanford's decision to spend Christmas in 2008 with Singh in California's Napa Valley wine country. When Stanford was indicted in 2009, Singh offered to pay the $500,000 bond, but federal rules wouldn't allow him to do that because Singh, from Fiji, was not a U.S. citizen.

Receivers, acting on behalf of Stanford's creditors, started legal action last year against IMG Worldwide, which represents Singh, to recoup sponsorship fees and advertisements that they allege Stanford paid for with revenue from fraudulent certificates of deposit. Some of the money Stanford gave IMG Worldwide -- about $10.5 million -- went to pay for golf endorsement fees, the Stanford International Pro-Am and sponsorship for Singh. The receivers also are pursuing $1.3 million paid to the Miami Heat, $5.1 million to the ATP Tour, $6.4 million to the University of Miami, $4.5 million to Texas A&M and $12.9 million to the PGA Tour, among other sports-related entities.

Athletes, including several Major League Baseball players, are among the many thousands of investors whose assets were tied up in Stanford's fall. Among the investors are former star pitcher Greg Maddux, who works in administration for the Texas Rangers; retired New York Yankees slugger Bernie Williams; Tampa Bay first baseman Carlos Pena; former Boston Red Sox right fielder J.D. Drew; and outfielder Johnny Damon, who is a free agent. Receivers had frozen the ballplayers' funds, a total of about $9.5 million, but a federal appeals court judge ruled in late 2009 to release them.

Iverson's taste in bling bigger than his wallet

The financial foibles of former Philadelphia 76ers player Allen Iverson are well known, with several media reports that Iverson is either broke or at least heavily in debt.

Iverson's latest blow came from a Georgia judge who ruled that a jewelry store can tap into Iverson's bank account to receive payment on an overdue bill. The jeweler, Aydin & Company, alleged in a lawsuit that Iverson purchased $675,500 worth of jewelry, including a watch and a diamond bracelet. He paid $300,500 toward the bill in 2009 but never paid the $375,000 balance. Including interest, Iverson owed $662,540. Iverson didn't respond to the lawsuit, so the judge ordered him to pay the $375,000, the interest that had grown to $405,753 and attorneys' fees and court costs of about $80,000, for a total of about $860,000. When Iverson still refused to comply with the court order, another judge ruled in January to proceed with garnishing the ballplayer's checking account, although it's unknown how much money is there for the jeweler to collect.

One of the first rules of business: Don't mix friends and funds

Also in January, Boston Red Sox outfielder Carl Crawford has been sued in a Texas court for a real estate deal gone bad by a former friend who alleges Crawford hung him out to dry on a construction contract.

Arturo McDowell claims that Crawford invested $75,000 in McDowell's construction company in 2007 on the condition that McDowell mentor Crawford's younger brother, GerCory. The company went under later that year, but McDowell started another company soon after and continued to mentor the younger Crawford, according to the lawsuit. In 2010, the Crawford brothers and McDowell started a business together called Pro-Source, with McDowell investing $123,000 of his own funds and entitled to 40 percent of the profits.

According to court documents, the partnership started to go south when, in February 2011, the company received a contract to build a $700,000 home for the Crawford brothers' father. McDowell claims that the brothers have refused to share any profits from that deal or from a subsequent smaller contract that Pro-Source had completed. On Jan. 20, McDowell filed a lawsuit against the Crawfords for damages of $500,000, claiming that, "Carl and GerCory have entirely shut Mr. McDowell out of Pro-Source after taking his money." The brothers have yet to file any response.