How March Madness comes together 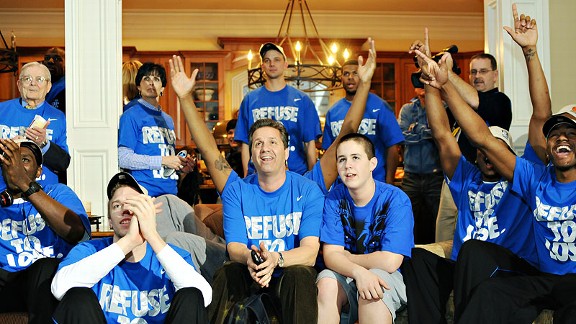 AP Photo/Brian BohannonSelection Sunday galvanizes fans and teams as they gather to learn whether they will make the NCAA men's basketball tournament or, if that's not in question for teams like Kentucky, what seed and region they will play in.

On Wednesday afternoon, nine men and one woman will take the elevator of the Westin Hotel in Indianapolis to a 15th-floor conference room to make some of the most intense decisions in sports. They are the members of the men's NCAA tournament selection committee, and between then and Sunday they'll be eating a lot of hotel food, sweating bunches of bullets, and wondering at some point why they don't do things like the BCS and hand their jobs to inscrutable pollsters and computers.

The answer, of course, is that it wouldn't be March Madness without them. Remember last year, when the selectors decided to let the University of Alabama-Birmingham and VCU into the Dance? Yeah, so do the fans at Colorado and Virginia Tech, who promptly broke out their Gene Smith voodoo dolls and needled the panel's chairman.

This year, the panel has a new chairman, former University of Connecticut athletic director Jeff Hathaway. And, as The File learned when we asked the NCAA for a look at how the selectors will spend their week, he'll be under almost presidential security as he leads the effort to build a 68-team bracket that will generate about $770 million in TV revenue and an estimated $2.5 billion in bets.

The selection committee for the women's bracket will be holed up at the same hotel -- third floor -- under many of the same circumstances.

They all have rooms on the north wing, but forget about getting a room in the south wing to snoop. Our check with the Westin's reservations desk shows the hotel is sold out. Even if you have managed to snag a room down the hall, the NCAA memo warns: "A security offer [will be] on hand to ensure that only committee members and staff have access to the north wing."

When it comes to lobbying the judges, coaches aren't afraid to make their cases in the press. (See Miami's Jim Larranaga.) But direct contact is another matter. In the world of NCAA politics, it's considered bad form to hit up the judges directly.

"It's pretty well-known not to bother the committee members and to work through league channels," said Colorado AD Mike Bohn.

Still, there have been cases of rabid boosters trying last-ditch pleas, which is why the NCAA's memo explicitly states, "Telephone access to committee members' rooms is limited." Even their families have to use a secret password issued by the organization's security staff.

"The NCAA tries to save you from yourself," said Chris Hill, the University of Utah athletic director who last served in 2009. "There are so many people trying to call you -- coaches, fans, members of the media -- you'd never get anything done if you answered your cellphone."

In the conference room, the selectors are surrounded by NCAA staffers, computers that run proprietary bracketing software, and thick briefing books that include such things as individual team workups and the controversial RPI rankings, which more than a few critics think should RIP. 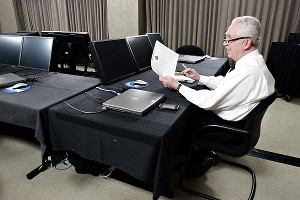 The Rosetta stone of the process is a manual called, "Principals and Procedures for Establishing the Bracket."

It spells out the rules for selecting the 37 at-large berths, starting with having the selectors list their first choices by pressing an "AL" button beside every school listed on their laptops. Once the results are pooled, any team that comes within two votes of a unanimous selection advances. The rest are placed on an "under consideration board" and debated through successive votes.

One side note: Selectors have to leave when their own schools get mentioned.

Gary Walters, the Princeton athletic director who chaired the panel in 2007, said he urged his colleagues not to get lost in the stats: "It doesn't take a rocket scientist to come up with the first 30 at-large teams. The arguments start when you get down to those last few. That's where you have to be careful not to be so impressed with the numbers that you lose sight of what you see with your own eyes."

To prevent leaks at that late stage, the NCAA briefing book also stipulates that hotel waiters can't enter the meeting room without the "presence of NCAA staff." And forget trying to catch the selectors on a dinner break. Meals get served on the hotel's top two floors.

By all accounts, the work is methodical but also draining. "The hardest part is leaving your life behind," said Hill. And it doesn't end on Sunday, when the committee will take one last look over its work and send Hathaway out to face the CBS cameras. By Monday, committee members will be scattered around the country, at assigned sites to manage the Dance.

Hill remembers ducking out before the fireworks so he could catch an early-evening flight to Utah. "I was sitting in the airport bar in my sweatshirt, and the adrenaline was still going," he said. "I thought about telling the guy next to me, 'Buddy, I'll bet you $1,000 that UNC is going to play in Austin, Texas.'"

Who knows? The bracket might have changed one more time.

Classy: Bernard James, the 27-year-old Florida State senior and Iraqi war veteran, got a lot of grief for appearing to try to kick Virginia's Joe Harris when the two got tangled going for a loose ball last week. Now, James, who spent six years in the Air Force, is getting just as much credit for writing this letter to Cavaliers coach Tony Bennett in which he apologizes for his actions. Bennett, whose team's overtime victory over Maryland on Sunday seems sure to get it into the dance, called the letter "classy."