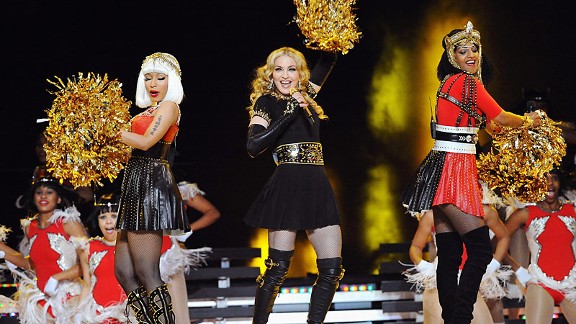 The Federal Communications Commission received 200-plus complaints from viewers of Super Bowl XLVI, ranging from shock at the antics of rapper M.I.A. to disgust over what many described as the lurid content of many commercials, according to records provided to The File under a Freedom of Information Act request.

Granted, the 222 viewers who complained were a tiny fraction of the 111.3 million people who watched the Giants beat New England in the most-watched Super Bowl ever. But they were plenty vocal about what they described as tasteless programming, a majority saying it was unfit for the children who were watching the game and halftime performance.

Most were ticked off at M.I.A. for what one Nashville resident described as giving "me and the entire viewing audience the finger." Another from Anchorage said her impromptu act was tantamount to "flipping off America and flipping off my family."

The rapper, who was invited by halftime star Madonna, could also be heard saying, "I don't give a s---," prompting this viewer to write: "We have certainly come a long way since Gone With The Wind was almost scrapped because Clark Gable said the word Damn." A parent in Canton, Mich., added, "We had to have an emergencee [sic] family meeting to contain the backlash of the lewd image."

NBC, which failed to cut away from and bleep M.I.A. in time, promptly announced, "We apologize for the inappropriate gesture that aired during halftime. It was a spontaneous gesture that our delay system caught late." The NFL issued an even tougher apology, stating, "There was a failure in NBC's delay system. The obscene gesture in the performance was completely inappropriate, very disappointing, and we apologize to our fans."

But that didn't mollify viewers like this one, who wrote: "I host a family game party every year, and next year I can guarantee you that I WILL NOT BE SHOWING THE HALFTIME SHOW OR ANY ADS DURING THE GAME. I will take a 'time out' and fast forward through all the millions of dollars your advertisers have spent on their 60 seconds of lewdity. [sic]"

The FCC also got an earful from fans who want to see it issue hefty fines. "I would like to see the FCC fine the "willie-be-jeebers' out of that idiot," wrote a viewer from Rushville, Ind. "Her little stunt was not cute, nor was it appropriate. If she wants to challenge authority, then show her some authority, FCC-dudes." Added this fan, "Fine MIA enough money to make her homeless."

FCC spokesman Neil Derek Grace said he had "no update or comment" about whether discussions were under way about whether to issue fines related to the incident. One reason may be that the Supreme Court is hearing a challenge from the Fox network to an FCC policy that allows it to punish broadcasters for what are known as "fleeting expletives."

The case involves the use of a curse word by Cher and Nicole Richie on an awards show that was outside the FCC's 10 p.m. to 6 a.m. "safe harbor" for adult programming. A lower court has already tossed out the policy, calling it a violation of free speech. The Obama administration is appealing.

The FCC is also embroiled in a dispute with activist Randall Terry over its Media Bureau's decision to bar a graphic commercial he created as part of a fledgling presidential campaign to promote his anti-abortion stance.

Although Terry failed in his quest to demand equal time, a congressional candidate named David Lewis succeeded in getting a similarly graphic ad on an Ohio NBC affiliate at 12:30 p.m., during pregame programming. That prompted a spate of complaints like this one from a parent in Loveland, Ohio, who wrote: "I understand there is freedom of the airwaves access for political candidates, but this type of material is completely inappropriate for public airwaves at that time of day."

Other complaints revolved around ads that pushed the edge of taste further than some viewers wanted to go -- especially with kids watching.

"When are you going to STOP allowing sex based ads," this complainer from Colorado Springs wrote, listing Go Daddy, Teleflora, H&M and Fiat as culprits.

With much the same list, a viewer from San Juan Capistrano, Calif., wondered: "Is it too much to ask that for one day, families can watch a broadcast without sex being shoved in our children's faces?"

Writing from Oswego, N.Y., this fan took a slightly larger perspective, noting that while "many people are outraged over MIA's obscene gesture during the halftime show & I would rather explain to my children why that is bad versus why a woman shouldn't seduce a man on the side of the street," as was depicted in an ad by Fiat. "To have everyone in an outrage during Janet Jackson's wardrobe malfunction or MIA's obscene gesture but to allow over-sexualized images is a ridiculous double standard."

Curiously, there wasn't much said about the actual star of the halftime show, Madonna. With a stage that had 11 light banks, a white screen that flashed video images, and the mantra "World Peace," the 53-year-old walked like an Egyptian, danced like a cheerleader, knelt in prayer and contorted like an act in Cirque du Soleil.

Yet for all of that, and the promise to put on the "greatest show on Earth," she was the one who ended up being overshadowed. How times have changed.

For a look at more of the letters written to the FCC, click here.