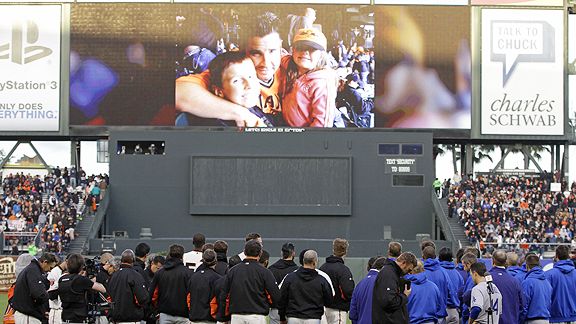 AP Photo/Nick UtBryan Stow, who was beaten outside of Dodger Stadium last year, was honored before a game last season.

It has been almost a year since San Francisco Giants fan Bryan Stow was thrown to the ground in the parking lot of Dodger Stadium and almost beaten to death. The two men charged in the March 31 incident have yet to go to trial, and the 43-year-old father of two remains in a rehab facility where he's undergoing aggressive therapy.

In response to the Stow incident -- and a few other recent episodes of fan violence, including a shooting after a San Francisco 49ers game at Candlestick Park -- a California legislator has introduced a bill that would attempt to ban violent offenders from attending professional sporting events. The bill would also encourage stadium security to do more to crack down on troublemakers.

"There are so many people out there who are just afraid to take their kids to a ballgame," he said, adding that even die-hard fans with season tickets are giving up seats because they're afraid to take their children to sporting events. "Teams are realizing that they face losing an entire generation of sports fans."

The Improving Personal Safety at Stadiums Act would create a list of people who have been convicted of violent felonies at sporting events and prohibit them from attending future home games of any of California's 18 pro sports franchises.

Gatto said the legislation, which was introduced in February, should go to the assembly's public safety committee for discussion during the first week of April.

The banned persons list -- along with mugshots -- would be made public and posted online to help enforcement, Gatto said.

His bill is modeled after similar laws that have been in place for several years in England and Italy. Those aim to prevent "hooligans" -- as they're called -- from attending games or buying season tickets to soccer matches. In England, where officials have reported a 93 percent drop in fan violence, the banned persons list even applies to away games in other countries. Gatto said the banned persons list is also comparable to how Nevada casinos keep problem gamblers or cheaters out of their establishments.

Critics of the legislation have said it would be impossible to enforce because people can buy tickets under another name or get them from a friend. Expecting ticket takers to identify people on a list among the thousands of faces they see coming into every event would be unreasonable, critics say.

Although the banned persons list would be publicly available and easily accessed by stadium and arena operators, Gatto said they would not be held criminally liable if someone on the list manages to get into a venue. But Gatto said a lot of the worst troublemakers are serial offenders whose names and faces should be familiar to stadium security anyhow.

Take the two men arrested in Stow's case. Whether such legislation would have prevented Stow's attack is unclear. The two suspects, Louis Alex Sanchez and Marvin Eugene Norwood, hadn't been convicted of prior crimes at a sports venue when they encountered Stow. But Gatto said interviews with the two suspects' neighbors indicate they were longtime troublemakers at games, even though their offenses never reached the legal system. 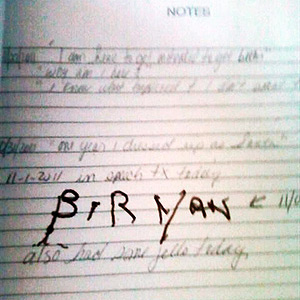 support4bryanstow.com A picture of Bryan Stow's handwritten first name, which was posted on his family's website.

Gatto said his legislation would encourage stadium security to take action against people who act up at games and then get their crimes on record. Traditionally, in California and elsewhere, it's common for stadium security officers to remove people from the stands who are causing problems -- dumping beer, shouting obscenities, starting fights, and so on -- and put them in a holding cell or kick them out of the stadium without actually reporting their crimes to police or having them arrested.

The Stow family filed a lawsuit against the Dodgers last May alleging, among other things, that the stadium and its parking lot lacked adequate security, that security officers did not respond to abusive fans, and that known criminals were allowed to attend the game. The lawsuit also alleges that drunk or violent fans simply get kicked out of the stadium and left in the parking lot. The Dodgers have denied the claims of liability and in their response indicated that Stow's own negligence and carelessness led to the attack. The case had been tied up in the Dodgers' bankruptcy filing but is back in state court and likely headed to trial, according to Stow's attorney.

Gatto said security officers have been reluctant to report offenders to the police in part because they know it's unlikely they would get much more than a slap on the wrist from the courts. He said if someone's punishment could also include a ban from attending any future professional sporting events, that could encourage stadium security to refer more troublemakers to the courts. Even if teams are worried about how those arrests would reflect on their venues, Gatto said it's far better than ignoring the situation and ending up with "high-profile incidents that are really going to scare people."

One of his staffers "got punched at a game because he was wearing his Patriots jersey, and he was with his little girl," Gatto said. "Should we at least keep a record of this? Should we involve the legal system? Probably. We probably should." The legislation also would require teams to adopt and publicize a system that would let people report unruly fans via text message, which is a trend that is already popular at several college and pro venues nationwide.

Anyone on the banned persons list who is caught at a sporting event faces a misdemeanor charge punishable by up to one year in jail and a fine of up to $10,000. But Gatto said the bigger deterrent for these would-be criminals -- who are often die-hard fans -- is the threat of keeping them out.

"You're keeping somebody who loves the game, you're threatening to take that away from them," he said.