Chamberlain in good company with injury 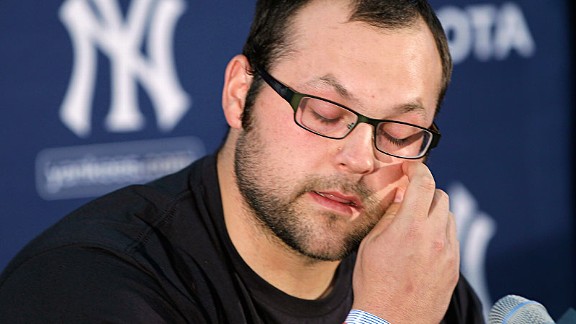 AP Photo/Kathy WillensNew York Yankees relief pitcher Joba Chamberlain gets emotional as he speaks about his relationship with his son. Chamberlain injured his right ankle while jumping on a trampoline with him.

New York Yankees pitcher Joba Chamberlain really can't be blamed for getting emotional while trying to defend jumping around on a trampoline with his 5-year-old son, a decision that ended in a serious ankle injury that jeopardizes his season, if not career.

He was encouraging a little physical exercise and bonding with his child. But Yankees fans apparently don't see it that way, chastising Chamberlain for being stupid, and disrespectful of his bosses for being so careless. Some of them said he should have known that adults don't have any business flopping around on a trampoline.

But take heart, Joba. You're certainly not alone in getting injured on a trampoline, and, according to accounts of your accident, you weren't nearly as careless as some other adults injured in trampoline accidents in recent years. From 2007 through 2010, more than 400,000 people nationwide ended up in an emergency room after trampoline play, according to the U.S. Consumer Product Safety Commission. That's enough people to fill eight Yankee Stadiums. (Here's just a sample of adults injured on trampolines in 2010.)

About 7 percent of the injured were between 25 and 64 years old. (Chamberlain is 26.) A CPSC study done in 1999 showed that leg and foot injuries were the most common injuries, accounting for 40 percent of all incidents. Chamberlain's specific injury is an open dislocation of the subtalar joint in his right foot.

Yankees general manager Brian Cashman was diplomatic when asked whether he thought Chamberlain's decision to go to the trampoline facility was too risky considering his profession.

"For the sake of what he's going through, I'm just gonna refuse to answer that question," Cashman said. "He's going through enough, and I'd rather just keep the focus from my perspective, and what's coming out of my mouth, is, 'What is the injury, and how we're gonna have to deal with it,' rather than the rest of that."

Trampolines have been a known danger for years, with the CPSC instituting new safety standards for the equipment in 2000. Since then, there have been seven trampoline recalls. Chamberlain's accident occurred at Boing! Jump Center in Tampa, Fla. Most centers, including Boing!, require participants to sign a waiver acknowledging inherent risks involved in the activity, including the possibility of a laundry list of injuries.

"At one point in the early 2000s we saw a rise in popularity and the rise in the incidents," said CPSC spokeswoman Kim Dulic, who added the agency would look into whether it needed to take any action involving the Tampa trampoline center. "Given the new safety standards and safety tips that we offer, I think the product can be used safely."

Chamberlain's description of simply landing wrong on his foot mirrors that of many other adult trampoline jumpers who hurt their ankles or ended up with strains, sprains or fractures, according to hospital reports. There have been a few extra-unlucky jumpers, including one 28-year-old who sprained his ankle as he got off a trampoline and stepped in a pile of walnuts.

And for as much grief as Chamberlain gets for jumping on the trampoline, at least he wasn't the drunk 19-year-old who was injured when he fell through a trampoline, or the 24-year-old who managed to lacerate his chin with his own knee, or the guy who jumped from his roof onto a trampoline at home and fractured a vertebrae in his lower back.

Still, it's doubtful that any of the other injured jumpers are professional baseball players getting paid millions of dollars to keep their bodies safe and sound for the mound, where there are plenty of other, more legitimate ways to get injured. Trampoline jumping isn't among Major League Baseball's list of prohibited activities -- yet.

And while it's still unclear whether Chamberlain will be able to pitch this season, it's very clear he won't be returning to a trampoline anytime soon -- if ever. Maybe a nice game of catch in the backyard with his son is a better bonding activity?