*Not including the team's insistence on keeping a racially insensitive nickname and mascot or becoming the last professional team to integrate, which they did only under pressure of legal action from the Kennedy administration.

10 - 2002: Daniel Snyder hires Steve Spurrier, who is doomed to fail when he studies his first opponent on film and remarks, "That defense looks a little tougher than Vanderbilt's."

7 - 1940: Lose NFL championship game 73-0 to the Bears. The team threw eight interceptions, committed eight penalties and allowed 519 yards. On the bright side, the Bears missed four extra points. It could have been worse. 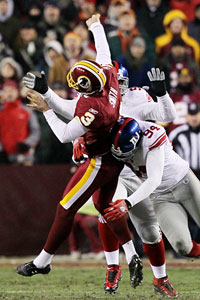 Al Bello/Getty Images'How did you see this play coming?'

6 - 1997: Quarterback Gus Frerotte injures himself after slamming his head into a wall to celebrate a touchdown. At least the wall was padded.

5 - 1984: Quarterback Joe Theismann throws a perfect screen pass to Raiders linebacker Jack Squirek for a touchdown in the Super Bowl.

4 - 1997: Wide receiver Michael Westbrook is caught on camera attacking teammate Stephen Davis during practice. Considering the pounding Westbrook delivered, it became even more evident he had hands of stone.

1 - 2009: That excruciatingly awful fake/trick field goal attempt Monday night that will go down as the worst designed play in NFL history. Even Richard Nixon had a better playbook.