Some new nicknames for the Celtics 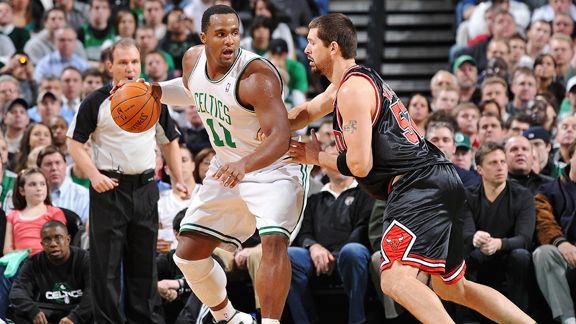 Because it's too accurate, Glen Davis no longer wants "Big Baby" to be his nickname. Instead, he wants to be called "Uno-Uno" -- a nod to his jersey number, and Chad Ochocinco's poor Spanish grammar.

Nice try, big fella, but you don't get to pick your nickname. Somehow Kobe Bryant got away with this -- but Glen Davis? Not for 5.3 points per game, he doesn't.

While we're at it, it's time for us to go up and down the Celtics roster and make some changes. Davis and the rest of the C's will have to take what we give them.

For years, that gray patch was the only sign of age on the perpetually youthful Sheed. Now, we wonder why the rest of his hair hasn't gotten the hint.

Got Kobe'd for the game winner and missed the 3 at the buzzer on Sunday? Gotcha, say the basketball gods! They don't forget, Mr. Shuttlesworth.

Too young to remember the end for Chris Webber? It was like this, just without all the cussing.

That's right -- no J. And as long as teams do everything short of turn their backs on him outside, he'll be rayon to Chris Paul and Deron Williams' silk.

How's this for motivation -- either he stays in shape, or it's "Glen" forever. Careful what you wish for, Big Baby.