Terrell Owens walks the walk, then talks the talk

The Richie Rich A*Muse fashion show on Wednesday was more of an entertaining circus spectacle than the typical fashion shows during New York fashion week. There were disco balls, techno music, body paint, confetti -- and Terrell Owens walking the runway. 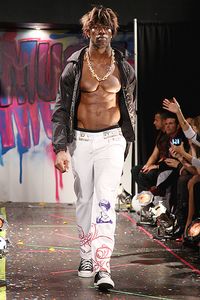 LFB Media GroupTerrell Owens had a great time and would like to model again.

"I think he's a great model!" said professional model Carlo Romero, who also walked in the show. "He has a great physique, a great build. He's a little taller than most models, but he could definitely pull it off. The clothes fit him, and he's got a good walk. He certainly has the right attitude."

As for Owen's self-critique?

The Buffalo Bills wide receiver was slightly reminiscent of Ben Stiller's "magnum" face from "Zoolander" when he walked the runway in a light-brown spiked wig, chain necklace, white painted pants and jacket. Cameras were on hand to catch the spectacle for the second season of Owens' VH1 reality series, "The T.O. Show."

Owens appeared to steal the show from Pamela Anderson, who was the "featured" celebrity for the second year in a row. It didn't help that Anderson showed up an hour late to the venue, making a very impatient audience not too happy with the former "Baywatch" star.

The restlessness was quickly taken away once confetti hit the runway along with a show that included male models in colorful Speedos, sequined bodysuits and bikinis. Owens made one lucky fan's night when he tossed his hat into the audience during his second runway walk of the night.

"It was so much fun," designer Richie Rich said after the show. "It couldn't have been better!"

Don't expect to have seen the last of a wig-wearing, shirtless Owens walking the runway. When asked whether his fashion show career would continue, Owens insisted he was "sure" he would model again.