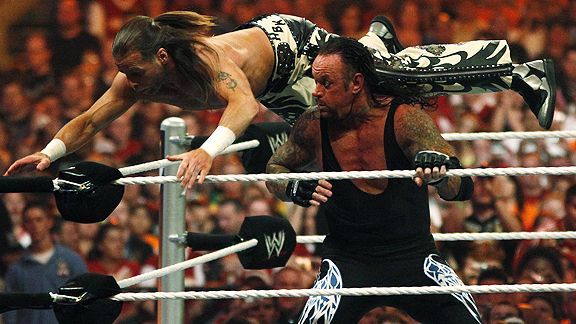 The annual showcase event for sports entertainment, WrestleMania, came and went Sunday evening at University of Phoenix Stadium in Glendale, Ariz., with some slight twists and turns -- but not too many as the Topps Slam Attax gaming cards really only got one prediction flat-out wrong when compared to the in-ring outcomes.

Fan reactions are still popping up all over the Internet and some story lines should still shake themselves out Monday on Raw, but we'll quickly recap WrestleMania XXVI here and see just how Topps' WWE gaming cards stacked up.

The Undertaker vs. Shawn Michaels: The showcase match truly was main-event material as The Undertaker ended the 26-year career of Michaels in a rematch of their classic fight from last year's WrestleMania, a match many consider to be the greatest match in Mania history. (This writer will wait until the DVD arrives in early May to decide whether this year's version topped it.) It was the first time since WrestleMania XI in 1995 to have a non-title match in the main event and the loss served as a fitting good-bye for "The Showstopper," who has had many a classic Mania match since his return from a legitimate spinal injury suffered at the hands of Undertaker in 1998.