Earl Woods had spoken of Tiger Woods for years

By now, you've probably seen the new Nike commercial featuring a black-and-white closeup of Tiger Woods and the eerie, computerized, disembodied, Jedi-Anakin-Skywalker-at-the-end-of-"Return of the Jedi" voice of his deceased father, Earl Woods. What you didn't hear? The stuff Earl said that wasn't used in the ad. Likely with good reason. Page 2 presents a sampling:

1. "Tiger will do more than any other man in history to change the course of humanity … I don't know exactly what form this will take, but he is the Chosen One. He'll have the power to impact nations. Not people. Nations. The world is just getting a taste of his power."

2. "I taught this to Tiger at a very young age, and to this day he's incapable of lying. He may not give you a full answer, but he never lies. The one time Tiger lied as a boy, he got physically ill." 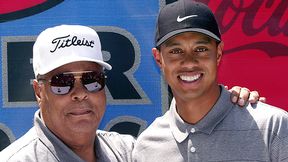 3. "Tiger's always had a team, and that team has been directed to give close and personal support to Tiger and follow the game plan, which was, as Tiger grew into his responsibilities, to pull back and allow him to grow, make mistakes and learn from his own mistakes and mature."

5. "A wife can be a deterrent to a good golf game. The level Tiger's at, finite problems could destroy him."

6. "You can't have it both ways. You can't have the fire, intensity, competitiveness and aggressiveness if you don't blow off steam."

7. "Tiger has a wife, a great wife. It's hard for a caveman to go out on a hunt, bring the damn food into the cave, light the friggin' fire, do every other damn thing, and then sit there and eat alone. Now, Tiger is really at peace. Which means, now, he's really dangerous."

8. "He really has to be a complete jerk just to get any time for himself. He's always gone someplace. He never even really knows where he is."