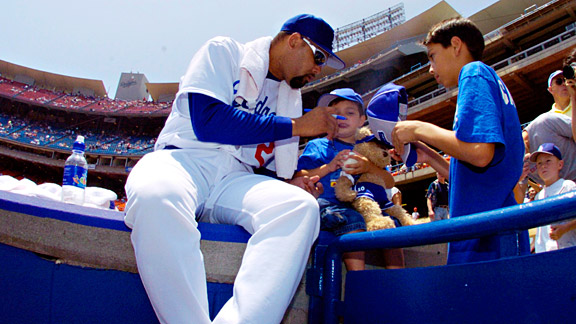 In honoring and paying respects to Jose Lima, The Baseball Project has written and recorded "Lima Time!" as a celebration of the former major league pitcher's love of life and baseball.

The Baseball Project just released "Lima Time!" as the fourth entry in its season-long Broadside Ballads series of songs the band is giving away free, exclusively on ESPN.com. Download it by clicking here.

"He was one of those players that had some success, but also really struggled a lot," The Baseball Project's Scott McCaughey said via e-mail last week. "It's not such an unusual story. I guess what made it unusual was his obvious love of the game, and the way I imagine he reminded those whom he played with to enjoy themselves."

Lima, 37, died May 23 after suffering a heart attack at his home in Pasadena, Calif. Between 1994 and 2006 he was 89-102 in 13 seasons with the Detroit Tigers, Houston Astros, Kansas City Royals, Los Angeles Dodgers and New York Mets.

Here's an example of a few lyrics, which McCaughey wrote: