10 great quotes about the U.S. Open 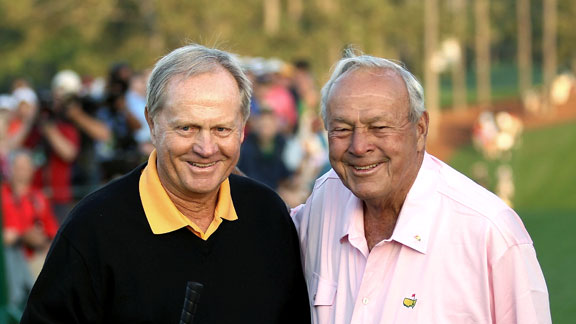 Streeter Lecka/Getty ImagesJack Nicklaus and Arnold Palmer have many great memories about the U.S. Open.

In celebration of this week's U.S. Open, here are 10 of the greatest quotes about the Open from my books, Golf Shorts and Golf Shorts, Par II.

1. "Shoot a lower score than everybody else."

-- Ben Hogan, asked the secret of winning the U.S. Open

3. "If I had been able to beat that strong, young dude in the tournament, I might have held him off for another five years … I let the Bear out of the cage."

-- Arnold Palmer, on losing to Jack Nicklaus in the 1962 U.S. Open Playoff

4. "You not only have to be good, but you also have to have two horseshoes up your rear end. You've got to be lucky to win the U.S. Open."

6. "Nobody ever wins an Open. Everybody else just loses it."

7. "You can't win the Open on Thursday and Friday, but you can lose it."

8. "It takes courage to win the U.S. Open, more courage than it takes for any other tournament."

10. "There are more bogeys in the last nine holes of the U.S. Open than in any other tournament in God's creation."

To read more sports quotes, check it out here.