Official rebuke. Public shaming. According to reports, North Korea's national soccer team and coach were served a heaping helping of both after losing all three of their World Cup matches -- which in turn leaves Page 2 with a single, solemn reaction.

Welcome to the party! 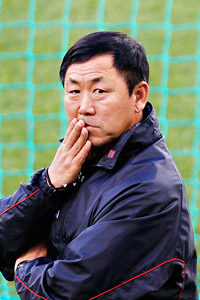 Indeed, the shocking thing isn't that the Glorious People's Democracy Squad -- or whatever Owellian moniker team North Korea is going by these days -- was symbolically tarred and feathered. It's that said punishment was news.

After all, those of us rockin' in the free world do the same thing all the time. Consider:

Over there: North Korea's team and coach summoned to a six-hour meeting in which they were lambasted by some 400 sports officials, government apparatchiks, athletes and students.

Over here: 24/7 sports talk radio; the blogosphere; any given fall Sunday afternoon in the Oakland Raiders' Black Hole.

Over there: North Korean team members forced to reprimand their coach.

Over there: Coach Kim Jong-hun reportedly expelled from the Workers' Party of Korea and forced to become a builder.

Over there: According to an intelligence source quoted in a South Korean newspaper, potentially be sent to prison camps.