My name is Duff McKagan, and I play rock and roll music. The beer on "The Simpsons" show was named after me, and not the other way around. (I suppose it is a testament to how much alcohol I used to drink. Yeah, not too sexy really.) A couple of years ago, I was offered a weekly column for Playboy.com and Seattle Weekly after goofing around in several other publications with an article "here" and an article "there"; it is now supposed that I am a writer to some degree. 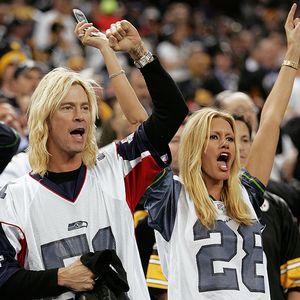 Frank Micelotta/Getty ImagesMassive sports fan Duff McKagan is just like you and me … with the possible exceptions of Nos. 3 and 11.

I have two bands at the moment: Velvet Revolver and Loaded. Some of you may remember me from Guns N' Roses. I wish I remembered more from then …. Ha!

I have played my music in most of our major league sports' venues (football stadiums, basketball and hockey arenas). As a result, I was able to get all of the "behind the scenes" vistas of these venues that most of us only wonder about. Pretty kick-ass. A whole lot of sports teams use my old band's song "Welcome To The Jungle" as their war cry. This fact alone could have probably sated some of you sports fans' "Why him?" inquiry. Honestly though, I am a huge sports fan myself, and am glad and honored to be given a bit of a pulpit here to voice some of my opinions and insights.

Let me just fill you all in on some other "Duff facts":

No. 1: I, like perhaps many of you readers, played little league sports. I was that three-sport guy; football, basketball and baseball. I had dreams then, of going all of the way as a major league pitcher.

No. 4: Team sports helped me in all of my later dealings within a rock "group."