Mike Janela is sitting in a basketball gym in Manhattan counting free throws.

He's got whiplash from moving his head side-to-side, like a dysfunctional bobblehead doll, charting the flight of the ball from Perry Dissmore's hand to the rim 15 feet away.

He figures after 10 minutes, this free throw-shooting pastor hell-bent on setting a new Guinness World Record will stop for water or to collect his thoughts. But like a metronome, Dissmore keeps shooting. 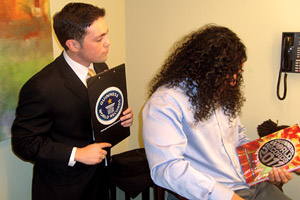 "I'm sitting there thinking about all the professional athletes who have trouble making free throws two at a time," Janela says. "And here's this guy popping them in -- almost 2,000 in an hour."

For the record, specifically, the Guinness World Record, the tally of made free throws in an hour reaches 1,968 before Janela stops counting.

Like it was in Janela's job description as a Guinness World Records records adjudicator to travel to St. Louis to witness a run at the world's largest bikini parade. Or when he flew to Merida, Mexico, for the world's biggest serving of roast pork to ensure all 6,821 pounds of pig were accounted for.