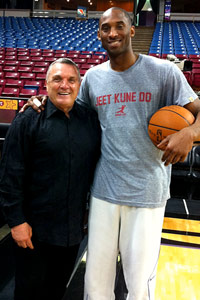 Bryant had already been on the court for two hours and normally doesn't take a break from his pregame shooting routine for pictures and autographs, but he had just heard the girl finish a stirring practice rendition of the national anthem and happily obliged as the man thanked him and introduced himself and his daughter.

"I'm Rudy Ruettiger and this is my daughter Jessica Ruettiger," he said. "She's singing the national anthem before the game."

"Rudy?" Bryant said as a smile came over his face. "The movie?"

Suddenly the roles were reversed and Bryant was the star-struck fan who wanted a picture.

Bryant was a sophomore at Lower Merion High School when he first saw the movie "Rudy" in 1993. He would see it at least a handful of times in theaters and by his estimation, "a hundred" times on tape. Bryant said the film motivated him to work harder than he ever had before and continues to inspire him to be the first one at the practice facility and the last to leave.

"That movie changed my life," Bryant said. "When I saw it I told myself if I can play as hard as Rudy with the talent I have anything's possible. I've met a lot of people in my life but that one there, man, that one [messed] me up."