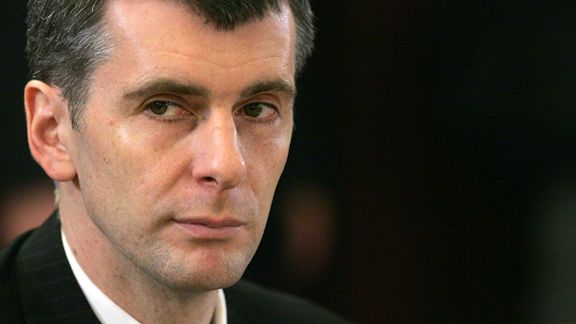 Sasha Mordovets / Getty ImagesMikhail Prokhorov has some big ideas on tap for his campaign for the Russian presidency.

Russian billionaire and New Jersey/Brooklyn Nets owner Mikhail Prokhorov recently announced he'll be running for president of Russia against Vladimir Putin next year. Our inside sources at the Kremlin have helped us gather a preliminary list of campaign promises Prokhorov is expected to make.

1. If elected President of Russia, I vow to move the entire nation at least fifteen miles North, where beautiful, fresh sod will be planted and life will be better for all.

2. I promise to work tirelessly to deliver a center who will average at least eight rebounds a game and relieve the low-post burden from the little people.

3. I will pass a constitutional amendment that says that once I mortgage the future to obtain a superstar, that superstar will be unable to escape to more desirable lands until well past his prime.

4. Once elected, I can assure you that our nation will have a T-shirt gun army to protect our citizens from boredom.

6. I fully support anyone joining the Occupy Red Square movement -- but only for 24 seconds.

7. Our new energy program will consist of tiny generators inside of each basketball that delivers 1 kilowatt of power for every 30 dribbles.

8. Crimes will now be referred to as "fouls." Violent crimes are "technical fouls."

9. Immigration to Russia will be limited to anyone over 6-foot-5 with a killer cross-over.

10. I will have the number 8 retired. And when I say "retired" I mean you will no longer be permitted to even write that number in your checkbook.