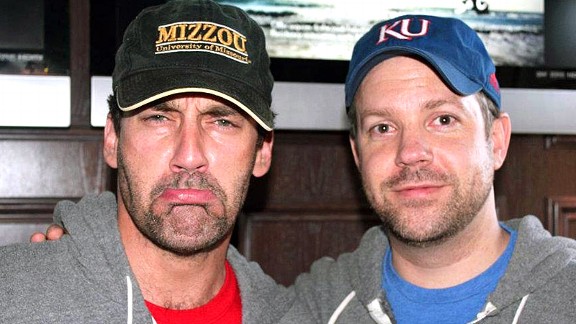 The KU Alumni Association captured this gem of a photo as "Mad Men" star Jon Hamm lamented Missouri's overtime loss to Kansas with buddy Jason Sudeikis at one of the association's KU basketball watch parties on Saturday, at The Parlor in Los Angeles.

Hamm is a 1993 graduate of Mizzou, which blew a 19-point second-half lead before losing to Kansas, 87-86 in overtime of the final scheduled game between the bitter rivals.

"Saturday Night Live" star Sudeikis, who is from Overland Park, Kan., went to Fort Scott Community College on a basketball scholarship before turning to acting. He and girlfriend Olivia Wilde attended a Kansas game in December. Kansas coach Bill Self, a big fan of Wilde's work on "House," said at the time, "I like Jason OK, but I was really looking forward to meeting her, and then they left early."