Should planking be considered a sport? 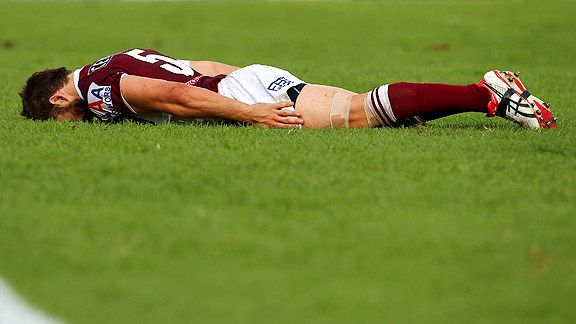 You're walking down the street. OK, maybe not right now. But imagine you are.

Suddenly you see someone lying on their stomach, smack in the middle of the sidewalk. Arms to their side. Face down. No movement.

What do you do?

If you don't know what's up, you might stop, ask if he or she is OK, and maybe even find help.

But if you know what's happening -- and since you clicked on this story, there's a good chance you do -- it's easy. You keep walking.

Planking, for the uninitiated, is the latest photo-based Internet craze now hitting America, featuring people lying flat on their face in odd (and sometimes dangerous) places.

Some call it a sport. Others call it silly. But it's undeniable that, for a short while at least, planking certainly is a thing -- and a highly competitive thing at that -- one that's "in" enough to inspire countless Facebook groups/Internet associations, and draw some of the country's most recognizable athletes (hello, planking patron saints Dwight Howard and Gilbert Arenas) and a few of North America's brightest stars (Justin Bieber: accomplished planker).

"There's no doubt whatsoever about its popularity," said Jeff Barlow, director of the Berglund Center for Internet Studies at Pacific University Oregon.

So, as we wait for the next athlete to plank a checkout counter or bakery or even a Waffle House sign, Page 2 asks: What's the deal with planking?

First, the rules. (That's right. This is not 'Nam. This is planking. There are rules.)

Directly quoted from the official Planking Facebook page, which has more than 530,000 fans:

1) You must always lay face down, ensuring your face remains expressionless for the duration of the Plank.

2) Your legs must remain straight, and together with toes pointed.

3) Your arms must be placed by your side, held straight and fingers pointed.

4) You must make it known that you are Planking. Saying 'I am Planking' usually get this across. Sternly announcing it will ensure a good result.

5) Your safety should always be considered. Properly thought through Planking procedures should always go to plan. Never put your self at undue risk.

6) Every Plank that is captured must be named.

"Someone has to take a picture," said Carroll Brown, creator of the Planking Association of America, based in Columbia, Md.

Then you must post it on some sort of social media site -- Facebook, Twitter, Lockerz or even a real-life bulletin board if you really want to go old-school.

Boom. You've planked. Now you wait for other people to comment. You might even get unofficial "points," based on degree of difficulty, hilarity or both.

Says Ronald Chapman, creator of the Planking in Houston Facebook page (and whose first plank, he says, was on a police car parked outside a restaurant): "The crazier the place, the funnier it looks."

And that's the whole point. But how did it start in the first place?

This is a bit debatable.

As one story goes, England's Gary Clarkson and Christian Langdon invented something called "The Lying Down Game" back in the late 1990s, with similar rules despite the different name. Clarkson and Langdon didn't respond to interview requests for this piece, but in 2009 Clarkson told The Toronto Star that he couldn't remember why they created it, simply calling the game "just a really stupid, random thing to do."

That's the widely accepted origin. But it's not the only one.

Some claim a New Zealander named Paul Carran invented planking in 2008, calling it "extreme lying down."

Some trace it to darker times, namely the days of the slave trade (more on that later).

Others have found -- seriously or not -- a more lighthearted inception to the craze: Snoopy.

And just this week, comedian Tom Green posted this 1994 video, which shows him lying face-down on a sidewalk as puzzled pedestrians circled him. He didn't call it that, dubbing it "Dead Guy" (similar to a planking-like fad called "playing dead"). But the crazy Canadian claims to have invented planking.

But let's go back to the English kids, who certainly started something back in the 1990s. How did this go from a small time-waster to, well, a much larger time-waster -- one whose tentacles now spread to Australia, Asia and North America (at least when those tentacles aren't placed by its side, held straight and fingers pointed)?

According to Web numbers, the Lying Down Game stayed close to the ground (sorry) until September 2009, when seven English hospital employees were suspended for allegedly playing the game while on duty. That spiked the game's search numbers, but eventually it retreated.

Then, two years later, it was reborn almost instantly as "planking" -- this time in Australia. Don Caldwell, the senior reporter for Know Your Meme, which tracks all sorts of Internet trends, points to one specific moment in March 2011, when Australian rugby player David "Wolfman" Williams (think Brian Wilson down under) planked as a celebration.

Suddenly, the Land of Oz had a new dance. Then, on May 16, something else happened: 20-year-old Acton Beale fell to his death while attempting a plank on a high-rise railing in Brisbane.

"That seemed to really make it take off in the news media," Caldwell said.

Now it's done all over the place, from America to non-English-speaking areas like East Asia.

And it's obviously not just for bored outcasts. Even athletes not embroiled in lockouts are getting involved -- like, say, players who just won the College World Series.

To Caldwell, that's just the way of the Internet.

"There seems to always be [a fad] going on," he said. "I think one of the reasons they spread is people see their friends doing it on their social networks … and they want to look cool, too."

What makes planking itself "cool," to Barlow, is multifold. For one, it's absurd, and as Chapman said, funny (at least to some). It also can be something of a protest, be it against social norms or against an oppressive society. It has a creative quality to it, too, which Barlow connects to body art.

And then there's the competition, which might be a major reason why athletes are involved. Sure, lying down on a sidewalk isn't challenging. But that Waffle House sign (Howard and Arenas)? A goalpost (Carolina Panthers Tyrell Sutton and Jonathan Stewart)? That takes some skill.

Chapman himself has a mantra: "Oh, look what he did. I can beat that."

So does that make it a sport?

Some see the connection, with comparisons being drawn to previous Web crazes such as Parkour (free running) or hashing (free running, but with lots of people and sometimes liquor).

"Parkour seems like it has a larger barrier to entry," Caldwell said. "To do a Parkour video, you need to be kind of good."

Good meaning athletic, which isn't always the case for planking. But that's another big reason planking has exploded. "It doesn't cost anything," Brown said. "Anybody can do it."

So maybe it's more of an Internet version of golf, or tennis, or one of those other largely recreational activities. Some plankers can be competitive. Others might just want to have fun.

"I don't imagine we're going to see it in the Olympics anytime soon," Barlow said. "But … you could see it as a sport."

Others aren't as impressed. It's been labeled "Parkour for lazy people." A Google search of "planking stupid" brings up more than 6 million hits ("planking" by itself generates 15 million). Kevin Durant doesn't seem taken by it, tweeting last month: "Nah forreal this planking stuff ain't eeenn funny tho."

Some governing bodies have banned it -- or at least are considering such a move -- from one Australian university to, reportedly, an entire Australian state, largely in reaction to the potential dangers.

And then there are those who have found a potentially painful connection between today's planking and an act portrayed by captors of slaves centuries ago: lining the captives face-down in rows, causing countless deaths due to deplorable living conditions.

Because of this, rapper Xzibit made headlines recently by tweeting: "Planking was a way to transport slaves on ships during the slave trade, its not funny. Educate yourselves."

But some say this connection is dubious.

"That is totally unrelated," said Brown, who is black. "[Planking] is a harmless game that has no relationship to slavery at all. It's good, clean fun."

As of this publication, here's a quick list of some (not all) athlete and celebrity plankers, in addition to the ones mentioned above:

But here's the question: Will they be doing it a year from now? A month? A week?

Brown sees planking lasting a while, but others aren't so certain. After all, we already have "pillaring" and "owling" making their moves. Could any of these take down the current champion of Web games?

"I'm not really sure," Caldwell said. "It's really hard to predict these types of things."

According to Web analytics, Caldwell said, it appears planking has yet to reach its peak in terms of traffic, so "it looks like it's got a ways to go still."

But sometimes these things fall off fast. And perhaps, as world monuments are conquered and physically impossible feats of plank become possible, one could reach the end of planking.

Heck, even Chapman sees a time when his Planking in Houston Facebook group becomes obsolete. "I think it's a fad," he said. "I think it'll eventually die out."

"They make great photos, though."

So until then, happy planking.