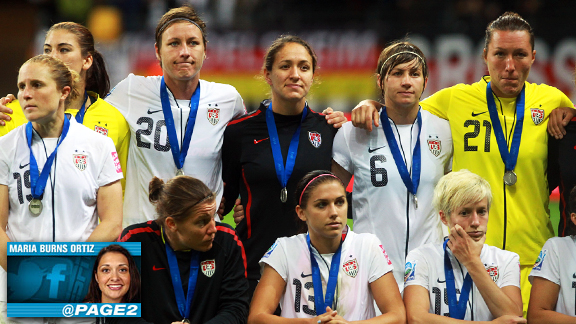 The world wasn't just transfixed by its television screens during the Women's World Cup final between the United States and Japan on Sunday afternoon. As social media activity illustrated, millions of fans were taking in the game on the second screen.

The final moments of the match saw Twitter experience an unprecedented 7,196 tweets per second, setting a new record and topping major international news stories such as the death of Osama Bin Laden and April's royal wedding.

Perhaps no player saw her social media stock soar during the tournament like Solo, the U.S. goalkeeper who entered the World Cup with less than 10,000 Twitter followers. As of Monday afternoon, she was closing in on 200,000.

Of course, the young fan who lifted his shirt after the first U.S. goal -- in a move reminiscent to many of the "Truffle Shuffle" from the 1985 movie classic "The Goonies" -- also saw a spike in Web popularity.

The event captivated the attention of not just the sports world. The web was abuzz with stars tweeting their support, from Justin Timberlake to Ashton Kutcher to Alyssa Milano.

Crossing into the political realm, the game dominated Barack Obama and Joe Biden's official Twitter feeds. Biden's wife, Jill, served as part of the U.S. delegation at the game. The @BarackObama account posted 13 updates on the game, including a tweet from the president apologizing for being unable to attend and a photo of the first family watching on TV.

Interest and support from the sporting world were nearly unprecedented.

Chad Ochocinco -- the Bengals receiver, soccer fan and avid tweeter -- also shared several thoughts about the game, mostly in Spanish, and let the U.S. players know his heart went out to them after the tough loss.

The social media surge continued after the game and, for the most part, was overwhelmingly supportive of the U.S. team, even after giving up a lead twice and falling 3-1 in penalty kicks.

The finish was disappointing for the U.S. women and their fans, but it was hard to root against Japan's feel-good story.

Japan's role in the social media success of the Women's World Cup final can't be overlooked. Japan is the most active Asian nation on Twitter.

With the addition of the Women's World Cup final to the list of top Twitter events, Japan has played a part in three of the top five highest-tweeted events (based on tweets per second). Before the World Cup numbers came in, the most-tweeted event was ringing in the 2011 New Year in Japan.

Fittingly, the two nations that delivered an incredible World Cup final on the field were also the best matched for success on social media.

The Women's World Cup has been credited for raising the status of soccer and women's sports in this country. The tournament now has raised the bar for social media and sports everywhere.

In a Major League Baseball first, players tweeted live from the field during the 2011 Home Run Derby. Twenty-three All Stars participated in the "Social Media Derby," which MLB executive vice president of business Tim Brosnan called a "rousing success."

Players picked up more than 120,000 new followers from the morning of the event to the morning after. Derby winner Robinson Cano came up big on Twitter as well. Cano's Twitter following surged by 84 percent, from around 35,000 to over 50,000. (That number is now over 70,000.) Jose Bautista, Gio Gonzalez and Matt Kemp jumped more than 40 percent in Twitter followers. Overall, players averaged a 17 percent increase in their followers.

"Our expectations were probably pretty high, and we well exceeded our expectations," Brosnan said. "What we did at the Home Run Derby took buy-in from all the people we needed to participate, including the players and players' association. And the response was overwhelming from our fans, but also in terms of players' desire to do it."

During the event, tweets using #HRDerby peaked at 4,995 per second, the eighth-highest figure in Twitter history.

MLB saw a boost across all social media platforms. During the Derby, MLB's Facebook averaged 190 percent more likes than usual. Video and photo content also was shared using MLB.com and other social media.

Steelers linebacker James Harrison made headlines and generated plenty of social media chatter last week after making a number of controversial comments and posing with a pair of guns for a Men's Journal feature story.

Harrison addressed the controversy in a lengthy Facebook post titled "This statement will be my only response to the Men's Journal article." In the post, which Harrision directed fans to from his Twitter account, he apologized to his teammates. He admitted making the comments but felt the "context was lost."

He also apologized to the gay community for any offense taken by words he used to describe Roger Goodell. Harrison added that he was in no way condoning gun violence by posing with firearms.

He lamented that "the above items and other comments have detracted from the original purpose of the story -- a position I have been advocating for some time now... [bringing] increased attention to the re-examination and installation of rules and regulations that would create a REAL impact on player safety."

The statement was first sent to Josina Anderson of Showtime's "Inside the NFL." She also released the statement by tweeting it.

The NBA and NFL lockouts have brought a surge in social media interest. The National Basketball Player's Association has been adding 100-200 new Twitter followers a day since the lockout, according to @IamaGM. The "[NFL Lockout](http://www.facebook.com/NFLLockout)" Facebook page, including a petition to end the lockout, has over 51,000 likes. ... Soccer star Cristiano Ronaldo has been celebrating hitting 30 million likes on Facebook with 30 days of trivia, contests and Facebook fan interaction.