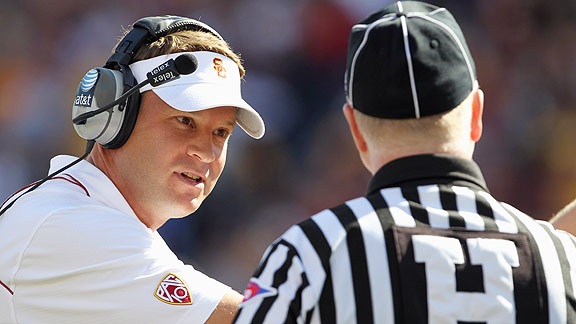 USC coach Lane Kiffin is one of the most polarizing figures in college football.

By departing Tennessee after one season as coach of the Volunteers to take the Trojans job in January 2010, he became vilified in Knoxville. He's also a lightning rod for attention -- both good and bad -- for getting three prominent jobs at a young age. He became the youngest head coach in the NFL's modern history with the Raiders in 2007, and he remains the youngest head coach in the Football Bowl Subdivision this season at age 36.

He's also charismatic and gregarious with a talent for recruiting, and many USC fans saw him as a logical successor to former boss Pete Carroll because of their similarly laid-back personalities.

So as Kiffin embarks on his second season piloting the Trojans, Page 2 caught up with him during his recent visit to ESPN headquarters. Here's what transpired:

Page 2: If you could take a mulligan on any coaching decision you've ever made, what would it be?

Which Pac-12 school has the most attractive cheerleaders? Best mascot? Most dapper coach? Page 2 quizzed the coaches themselves to get answers. Page 2's Pac-12 coaches questionnaire »

Kiffin: In Alabama two years ago, we had a chance to beat the No. 1 team in the country. We were playing at Alabama when we were at Tennessee. On the last drive, we were lining up to kick a field goal for the win. Knowing now that it was blocked, I would've been more aggressive and tried to score [a touchdown] on that drive instead of just playing for the field goal.

Was your son Knox named after Knoxville, Tenn., or is that an urban myth?

He was named before I even got the job, actually. ... [My wife, Layla] picked out the name because she had seen somebody else had named their kid Knox. I think it was Brad [Pitt] and Angelina [Jolie], actually. She had picked it out when we were still living in California.

You've been pretty fearless in your career choices, whether it was going to the Raiders at age 31 or leaving Tennessee after one season to go back to USC. What gives you the thick skin to ignore your critics?

I really enjoy challenges. I think of things as competition when people say you can't do something. Whether it's going to Oakland, and somebody says you can't make it work with the owner. I took that as a challenge, which I failed at. They said you can't go to the SEC, because you're not from the SEC. They said don't go to SC because you have to follow Pete [Carroll]. None of that bothers me. I just take that as more motivation.

What's the biggest misconception people have about you?

If there's a group of articles written about me, I can usually tell the difference if someone's writing an article and they know me from someone who doesn't know me. They're usually very different. People always say, "Do you get bothered by what people say or blog or write about you?" I only do if I know them. If I know them, and I have a relationship with them and they write that, then that would surprise me a lot. Usually the people writing the negative stuff don't know me at all. So I don't concern myself with that because I can't control it. People want to write what they want to write. If I don't know them, then it doesn't bother me.

Page 2 interviewed each of the Pac-12's head football coaches during their recent pilgrimage to ESPN headquarters. What did your coach have to say?

What are some of the things that the media or fans have wrong about you?

I think people that don't know me, it's almost like they don't believe I'm human. I've said that before. [They don't believe] that I actually have three kids or that I take them to the park and do normal things. It's not just this renegade person, because that can be a perception that has been created by people. I think people are really surprised when they get around me, as opposed to what they've read.

Your father, Monte, is a longtime coach, and you've been around football all your life. At what point did you know you wanted to be a coach as well?

Real early. I remember watching games in sixth, seventh grade. [Monte] would come home for the second half of "Monday Night Football." I was watching the great players, but I found myself watching the coaches even more sometimes -- the management of the game, the decision-making going on, the demeanor on the sidelines. It was also intriguing to me that here's someone who's not in uniform that's having such a big impact on the outcome of the game. ... Even in high school, I knew that's what I was going to do. I was a quarterback, calling my own plays and trying to develop game plans, even though I was still playing. It probably didn't help me as a player in college because I was so on that path of knowing what I was doing. I wasn't focused on getting to the NFL because I already knew I was going into coaching.

In retrospect, was going to Oakland an unwinnable situation?

It is almost impossible. I don't know why I didn't listen, [because] so many people told me that. That's why, if you ask [Steve Sarkisian], he didn't go. He had a chance to go. You're just so far behind other clubs. You're waiting for [owner Al Davis] to wake up and come to work at 2 o'clock in the afternoon to make decisions that the rest of the league is making at 6 o'clock in the morning. You're still running videotapes over to the hotel so he can watch practice at night.

The overhead projector Al Davis used during the news conference he held after your firing seems like kind of a metaphor for how he runs the Raiders. Would you agree?

Yeah, it was. It was sad, really, to see somebody who's accomplished so much in his career and been such a powerful figure in the NFL ... to see that was actually pretty sad to watch. But you're exactly right, an overhead projector -- that describes the pace that you're dealing with of the way an organization is being run.

Sebastian Janikowski has a cannon for a leg, but you sent him in to attempt a pretty long field goal (76 yards) in your last game as coach of the Raiders. What was your strategy when you sent in that play?

That's Shane Lechler's fault. [Cracks a smile.] He was the holder -- the punter. ... Shane told me [Janikowski] could make it. [Janikowski] actually, when you put him that direction in [the Oakland Coliseum] during warm-ups, he'll make some from there. So, I blame Shane for that one. ... If you get the wind right in that direction, he can make that.

How much did your first coaching job pay?

Check out ESPN's new website devoted solely to blanket coverage of the Trojans program. Recruiting Nation: We Are SC

Keep up to speed on the Trojans with daily coverage and video from ESPN LA. USC Report blog

I was a graduate assistant at Colorado State, and I think we got $550 a month.

You're still the youngest coach in the FBS, and Dennis Erickson [at 64] is one of the older ones. But the two of you played for the same college coach, Jim Sweeney. What coaching similarities can you see from the influence of Sweeney, even though you and Dennis are separated by a few decades in age?

What coach has influenced you the most?

Probably Pete [Carroll]. Being with him for six years at such a young age -- at 24 years old, I think -- when you're just starting up your career and as much success as we had those six years. Anytime you're having success, you take from it. So I'd definitely say Pete.

What are some of the personality traits or fingerprints of his style that you've adopted?

His ability to relate to the players and motivate the players and to run a positive environment. Being around a lot of different environments, one of the things [that made him] so unique was that he was so positive. People wanted to come to work and players wanted to come to practice and meetings. He made it fun. You're never going to be just like somebody, but I try to keep that balance in there with discipline and players enjoying it and the staff enjoying it, too.

Do you pull any of the same pranks as Pete, like when that LenDale White dummy was pushed off the dorm?

That's one thing I didn't get from him. He took it a lot further. He won a lot more games. He could get away with that stuff.

Which opposing player are you most glad you no longer have to face?

I was hoping it was going to be Andrew Luck, but he came back. Jake Locker, because he had 420 [total] yards against us. He, obviously, was a huge difference in a game that went down to the wire, so we get to play [Washington] this year without him.

Probably Michael Jordan, because he was so dominant in so many aspects of the game and he was so exciting to watch.

What song or performer is on your iPod that might surprise people?

Bon Jovi. I don't know if that surprises people. ... and Kenny Chesney. That'll surprise people because he's from Tennessee.

Not counting your school, which Pac-12 university has the most attractive cheerleaders?

Oooh, I just had a player get in trouble for a question like this. ... I don't know. I've never looked. ... I could've gotten in a lot of trouble with that answer right there.

Not counting your school, which Pac-12 university has the best mascot?

Stanford, for the fact that it's not an animal.

Not counting yourself, who's the best-dressed coach in the conference?

Right now it's [Mike] Stoops, because he's single. ... He's totally changed. He drinks fancy wine now. He reads the same magazines as my wife. He's got designer clothes on all the time. I don't know what happened to him ... and he had a 30-minute conversation with my wife about "The Bachelor," because he's watched every episode of "The Bachelor." I can't believe that's in the Stoops bloodlines.

Litton's in Knoxville ... the burgers.

What's a hobby or recreational passion of yours that might surprise people?

Golden Tee. I have a Golden Tee machine in my house.

You mean the full-size arcade game? Where do you buy one of those?

My wife bought it when we were in Oakland years ago.

What's your favorite place to vacation?

Tampa, Fla. ... We've done it for years, being at the beach out there and how relaxing it is.

Will you ever go back to wearing the goatee?

Visor. ... [Steve] Spurrier. Growing up and watching him, I was always intrigued by him, watching him at Florida. You know, just the way he ran the offense and his confidence and his visor ... and he doesn't know that story.

So are you always going to be a visor guy?

Until I start losing hair.