With exactly four weeks remaining in the season, four division leaders have at least a five-game lead. The closest gap is between the Red Sox and Yankees, who both are almost assured of reaching the postseason as the AL East champ or the wild card. But that doesn't mean there isn't a lot riding on the final month of the season. Here is what each team will be playing for this September:

ATLANTA: Too far behind Philadelphia to have a realistic shot at winning the NL East title, Atlanta instead will battle hard down the stretch to secure the wild-card spot early enough so that it can rest its players and set up its rotation properly in order to lose in the first round of the playoffs, as usual.

WHITE SOX: To make sure he salvages a very disappointing season by at least hitting his weight, Adam Dunn will take extra batting practice against left-handers, shorten his swing and also go on a crash diet to shed 110 pounds.

TIGERS: Detroit manager Jim Leyland is considering a one-man rotation for the postseason, starting Justin Verlander every game and hoping for as many rainouts as possible.

GIANTS: San Francisco has fallen six games behind Arizona, but when rosters expand Thursday, the Giants have a very good chance to set a major league record with 48 players on the disabled list at the same time.

MARLINS: With Florida well out of the race, manager Jack McKeon will relax his rules and allow outfielder Logan Morrison to use that "new-fangled social media technology" in the clubhouse such as sending and receiving Western Union telegrams. He also will loosen up on his strict fashion policy on team flights by allowing players to wear shoes with laces instead of buttons.

CUBS: Chicago will hold a Labor Day Telethon to pay off the more than $100 million remaining from the ridiculous contracts Jim Hendry handed out as general manager.

MARINERS: After a wildly popular commercial appearance and a coveted recent bobblehead night, Seattle will expand one of its most successful promotional campaigns ever by letting the fictional Larry Bernandez actually pitch in a game Sept. 17. He will hold the Rangers to two runs on five hits and strike out nine in seven innings but lose 2-1.

YANKEES: Alex Rodriguez will nurse his injured left thumb in September so he'll be at full strength for the World Series of Poker.

NATIONALS: Washington is eagerly awaiting the September return of Stephen Strasburg so fans can celebrate Happy Strasburg Day again, which figures to be much more popular than Happy Werth Day has been this season.

ANGELS: Trailing the Rangers by 3½ games, Anaheim will beef up its roster by adding the Comeback Orangutan, the Go Ahead Armadillo and the Last Gasp Lava Lizard to join the Rally Monkey.

ATHLETICS: Every bachelor in the Oakland organization is looking forward to the Sept. 23 release of "Moneyball" because women in bars may go home with them under the mistaken impression they work for Brad Pitt and they can hook them up with him (Jonah Hill, not so much).

ROYALS: Kansas City will use September to call up more prospects, consult with the minor league staff, carefully evaluate all its young players and then decide which have the most promising futures so the Royals can trade them away during the offseason.

RED SOX: Battling the Yankees for first place, the Red Sox will hope that Tim Wakefield earns his 200th career victory before he qualifies for social security. 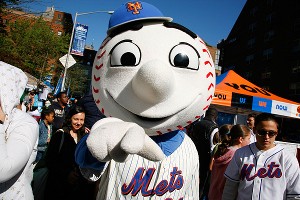 METS: In order to make payroll, owner Fred Wilpon will finalize selling the corporate naming rights for Mr. Met, who will be renamed "Mr. Butterworth's" in September.

ORIOLES: The Orioles will try to have their first season under 81 losses by cancelling all remaining games due to Hurricane Irene.

ASTROS: At the owners next meeting in September, Jim Crane will make a strong pitch for league approval of his purchase of the Astros by emphasizing the strengths that will appeal to the other owners: He is well-financed, conservative and not married to Jamie McCourt.

RANGERS: Texas will gear up for the pennant run by turning off the air conditioning in the visiting clubhouse.

CARDINALS: Trailing Milwaukee by 9½ games, St. Louis will concentrate on Fan Appreciation Night in which Cardinals fans are told to show their appreciation by donating directly to the team's fund to re-sign Albert Pujols.

CLEVELAND: Having already claimed Jim Thome off waivers, Cleveland will further fuel its stretch run by trading for Omar Vizquel and signing Manny Ramirez, Carlos Baerga and Albert Belle out of retirement. They will, however, not sign Jose Mesa.

PADRES: San Diego will not wear camouflage uniforms on Sundays in September with the hope that their offense finally will be visible.

DODGERS: Frank McCourt will consult with the team astrologist to determine what is most important to the Dodgers' future: re-signing MVP candidate Matt Kemp or keeping his house in Willowbend and his $150,000 yearly hair care allowance.

TWINS: The Twins hope they can track down bounty hunter Boba Fett by the end of the month so they can have him seal Joe Mauer in carbonite and keep him healthy over the winter.

REDS: Cincinnati will spend the month deciding whether to use Aroldis Chapman as a starter next season, a setup man, a closer or just have him smash pinatas with his 105 mph fastball.

RAYS: The Rays will try to boost attendance at their games by just showing Yankees and Red Sox games on their scoreboard instead.

PIRATES: Having gotten back on track after an uncharacteristic run that had them in first place in July, the Pirates are back to 10 games under .500 and eagerly looking forward to their annual fantasy football draft.

BLUE JAYS: As always, the Blue Jays will spend September lobbying that they should be in the AL West.

ROCKIES: Despite being eight games under .500, Colorado is confident it can get right back into the race if the Rockies just win 28 games in a row.

PHILLIES: Philadelphia officials are hard at work ironing out the details for their World Series championship parade route.

You know the rules. You get a fragment from an old box score and the challenge of determining what game it is from and why it is significant. I give this one a difficulty rating of 3.0. Hint: Don't overthink this one. It's the story behind it that is the challenge.

New York's Chris Capuano struck out 13 in a shutout win over Atlanta (9 IP, 2 H, 0 R, 0 ER, 0 BB, 13 K), while Tampa Bay's David Price struck out a team-record 14 (7 IP, 3 H, 0 R, 0 ER, 2 BB, 14 K). And then we had reliever Jordan Norberto's horrendous line Thursday for Oakland when he allowed four runs on one hit (2/3 IP, 1 H, 4 R, 4 ER, 5 BB, 0 K). The Yankees won that game 22-9 and hit a major league record three grand slams, which colleague Doug Kern points out is more than 18 teams had hit all season. The Yankees have now scored at least 17 runs in two games against the Athletics this season and Phil Hughes started each but failed to get the victory in either because he didn't pitch the required five innings.

But this week's award-winning line goes to Jorge Posada for this once-in-a-career line:

After the Yankees scored their 22nd run, Posada entered the game as a defensive replacement at second base, the first time he has ever played there in his major league career. He has now played second base this season but has yet to catch an inning.

(I Still Call It) Comiskey Park, Chicago. New Comiskey Park received a lot of bad press when it opened in 1991. Part of that was due to the uncomfortably extreme pitch of the seats in the highest level -- you felt so high and far away that you needed Sherpas to carry your beer and nachos. Part of it was due to it being the last stadium to open before Camden Yards ushered in the retro-ballpark era. And part of if it was due to replacing the majors' oldest stadium (the original Comiskey opened in 1909) where both Babe Ruth and Michael Jordan homered (MJ did it in batting practice). But the stadium is far better than its reputation. The White Sox trimmed off the very top rows and also added a slight overhang that greatly improved the park's aesthetic appeal. The ballpark is easily reached via the red line, there are excellent concession areas, and best of all, it has a world championship banner from this century. The one negative is that the Sox take the separation of the classes to a disgraceful level by preventing non-season-ticket holders in the 500 level from going down to the main concourse. I'm not sure whether their Sherpas are exempt. 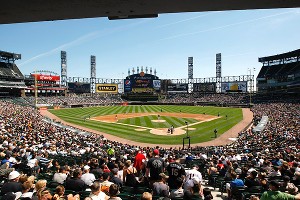 And The Thing Is, He's Right: I hope Ozzie Guillen stays in Chicago because I would miss his pregame talks with the media. For instance, in the midst of a gorgeous few days in Seattle last weekend, Ozzie said he loved Seattle, that it was one of his favorite cities, but the only problem was "it's not in the United States." By that, he meant that it was too far away from everywhere else in the country (particularly Chicago). Still, despite the time it takes to fly to it, he said Seattle is his favorite city to visit because the fans never boo you there. You can be getting blown out and the manager can be screwing up, he said, but the fans will still be cheering and chanting, "Eee-Chee-Row! Eee-Chee-Row!"

Did This Ever Happen to Ripken or Gehrig? In case you missed it, the sports injury of the year was 2004 Olympic gold medalist Justin Gatlin showing up to the track and field world championships last week suffering from frostbite on his feet. Gatlin was injured after laying in a cryogenic chamber with wet socks. Not that baseball players are immune to such things. Rickey Henderson got frostbite one day when he fell asleep while icing. And Mariners trainer Rick Griffin remembers Brian Giles (the one who played from 1981-90) icing his knee too long, which caused a condition called foot drop in which a nerve was frozen and prevented him from raising his ankle and toes properly for a couple of weeks.

Lies, Damn Lies and Statistics: Despite all the early season media angst, Derek Jeter not only has raised his batting average to nearly .300, he's had five games in which he's had at least four hits, including two five-hit games. He's averaged almost two hits a game since Aug. 11.

The only clue you needed in this fragment was the 14 under innings pitched for McCatty. This game was played Aug. 10, 1980, during the first BillyBall season. Steve McCatty not only pitched all 14 innings -- no pitcher has thrown that many in the 31 years since -- he became the fourth Oakland starter to do so that season. That's right. Manager Billy Martin left his starter in to pitch 14 innings FOUR TIMES in 1980! McCatty, Rick Langford, Mike Norris and Matt Keough all did it. Think about how rare it is for a team to play four 14-inning games in a season, let alone have the starter go the distance in each one.

Not only that, Billy started McCatty on April 14 and pulled him with two outs in the second inning. He then started him the next game and let him go 8 1/3 innings. So he not only had a pitcher start back-to-back games, he let him pitch 10 innings. Is it any wonder these guys broke down soon afterward?