A radical path to conference realignment 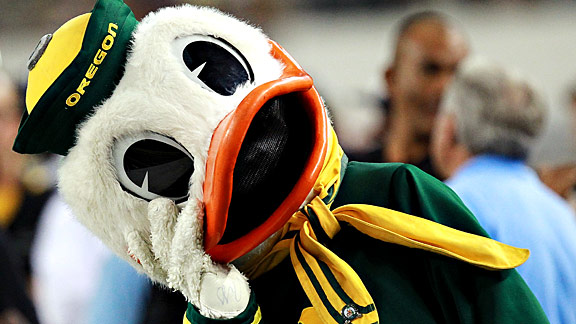 Ronald Martinez/Getty ImagesPerhaps the Ducks belong in a conference where they can flock together with birds of a feather.

Pitt and Syracuse are nowhere near the Atlantic Coast. TCU is not in the East. Texas A&M isn't in the Southeast. Colorado and Utah aren't near the Pacific Coast. The Big Ten has 12 teams, and the Big 12 has 10 (soon to be nine). If the names of college conferences no longer mean anything, why should we keep the current conference structures in place?

Other ways to organize college teams would make far more sense than what we have today.

Here are a few rough ideas that would return sanity to NCAA conferences.

Comment: Six power conferences, all with between eight and 14 teams, all with wide geographical distribution and large TV markets. This makes more sense than what we have now.

Comment: This five-conference alignment splits up the urban schools, rural schools and private institutions. Best of all, it allows everyone who went to state schools to focus their hatred on one specific conference.

Nike Conference: Pretty much all the other schools.

Comment: If the current conference realignments are all about money, this is where it's all eventually going. You know it; I know it. Let's just get it over with now.

West Virginia was turned down this week by both the SEC and ACC, according to a CBS Sports report. It's presumed the SEC felt that the Mountaineers weren't good enough athletically, while the ACC didn't believe that the school's academics were up to snuff. Ouch. To secure the future of its program, West Virginia needs to win this game by 50 AND spend the entire halftime out on the field reciting Yeats.

This Saturday begins a 10-game stretch for the Aggies in which they play nine Big 12 teams. That's a brutal nonconference schedule.

Florida Atlantic has lost its first two games of the season by a combined score of 85-3, and now the Owls head to Auburn to play the defending national champions Saturday (7 p.m. ET on ESPN3.com). The Owls have just 133 passing yards on the season. That sounds bad, but their rushing game is worse: On 50 carries, FAU has 52 total rushing yards -- a 1.04 yards per carry average. On the positive side, the Owls have only one turnover so far this season. So they do a good job of protecting the ball on their three-and-outs. Actual owls, if you're reading, sleep extra-late on Saturday. You don't want to see this game.

Some people claim there is no loyalty left in college football. But if you want to find some men who keep their word, Bobby Petrino and Nick Saban have been at their respective schools a combined nine seasons. Wow! No one ever could have predicted that. Really.

"Dabo? Jimbo. Jimbo? Dabo." As a connoisseur of ridiculous coach names, it is one of the great regrets of my life that I was not present when Dabo Swinney and Jimbo Fisher were introduced.

Andrew Luck and Stanford have the week off, so there's a chance for another candidate to have the stage. San Diego State sophomore Ronnie Hillman has 497 rushing yards and 8 touchdowns through three games this season. On Saturday, the 3-0 Aztecs play at No. 22 Michigan (noon ET on Big Ten Network), coached by Brady Hoke -- who, you may recall, was SDSU's coach last year and recruited Hillman. Now Hoke's defense has to find a way to stop him. Whoops! Let this be a lesson to coaches: Don't recruit good players because they could beat you at a future job.

With Syracuse moving to the ACC, perhaps the Orange's new conference mates would like to learn about Otto the Orange, also commonly referred to as: "What is that stupid thing? Their mascot? Seriously?" and "The lamest mascot in all the land."

The school's first mascot was a goat. Vita the Goat. Then it went with The Saltine Warrior -- an Indian chief -- until 1978, when the school decided that a stereotype as a mascot might not be the way to go. Then came a gladiator covered in orange armor who was "soon both laughed and booed off the field," according to the school's website.

What followed was a series of proposals, ideas and temporary replacements for a new mascot, including:

Eventually Syracuse went with an orange with legs: Otto. But first it was known as Clyde the Orange, then Woody the Orange before the name Otto stuck.

ACC, I share all of this with you because as dumb as Otto the Orange might seem, you can see that it's actually one of the better ideas that Syracuse conceived.

Get a Koozie Pocket Shirt

We've all thought the same thing before: "Shirts are OK, but they really suck at holding beer bottles." But now our problems are solved thanks to the Koozie Pocket Shirt! For only $24.99, you can have your very own shirt that holds -- and insulates -- a can or a 12-, 16- or 20-ounce bottle. No more having to use your stupid hands between swigs! After you buy one for yourself, get one for your friends and loved ones. It's the perfect gift for a tailgater who is classy enough to wear a shirt, but just barely. 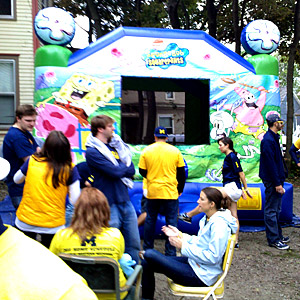 Tailgate Photo of the Week

(Thanks to Varsity Tailgate reader Brian M. for the submission. Have a good tailgate photo to share? Send it to VarsityTailgate@gmail.com or via Twitter to @DJGalloESPN.)

"I certainly want to be politically correct and not be against serving beer in Tiger Stadium. Certainly the athletic director and the chancellor would have to make that decision. But I promise you, we would enjoy playing in front of a Tiger Stadium that occasionally had a beer."

Wait. Being "politically correct" means being FOR serving beer at a college football game? Louisiana might be the only place in America where the political system isn't hopelessly broken.

Texas drubbed UCLA, Iowa State beat UConn and Oklahoma beat Florida State. The conference's six games played against non-BCS teams were won by an average of 42 points. On the downside, Kansas lost 66-24 to Georgia Tech, but that will probably end up being one of the Jayhawks' best games of the season. Congratulations to the Big 12 on being the Greatest Conference Ever of the Week!

Big 12 commissioner Dan Beebe got a three-year contract extension in November 2010 after Colorado and Nebraska left the conference. Now, after Texas A&M's planned departure, Beebe is reportedly being forced out. So, to recap: two teams leave = three-year contract extension, whereas one team leaves = forced resignation. I'm not sure whether the Big 12 understands how compensation packages work. If every team had stayed, I guess Beebe would have been hit repeatedly with sticks.

After a week off the hot seat playing Coastal Carolina, Mark Richt makes a triumphant return with a road game at Ole Miss (12:20 p.m. ET on ESPN3.com). Welcome back, Mark! Georgia fans have kept the hot seat quite warm for you.

Dusty Rust's given name is Durward Rust III. His father goes by Woody Rust. His aunt played on two national championship basketball teams at Louisiana Tech. Her name? Rita Rust. All of this is true. Which is awesome.

Ruffin McNeill -- anthropomorphic teddy bear? Perhaps a friend of Teddy Ruxpin? Nope. Head football coach of a team applying to join the Big East. Let's all hope that application doesn't go through. A coach named Ruffin McNeill belongs in the SEC. In fact, East Carolina should apply to be the SEC's 14th team. And its application should just be a blank sheet of paper with two sentences written on it: "Our coach is named Ruffin McNeill. We'll await your call."

A West Virginia fan group is going to go bankrupt.

The Mountaineer Maniacs, a West Virginia student group, announced this week that they are giving $20 vouchers that can be used for the purpose of school-licensed apparel to any fans who trade in vulgar T-shirts. They clearly underestimate the number of vulgar T-shirts in West Virginia.