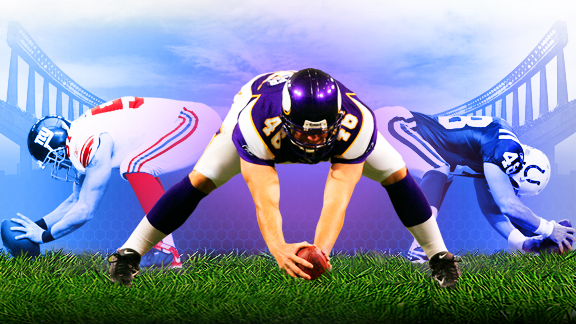 In football, the long snapper is anonymous.

At least, he should be.

If you hear the long snapper's name called, it's almost certainly because he made a mistake. But that's hardly fair, considering that a lot of them played tight end or linebacker in college and have a bachelor's degree in accounting.

The fact is, long snapping is a pivotal element of football, and by extension, American society. If you don't agree, we suggest you educate yourself at longsnap.com, a site dedicated to long snappers and the art of long snapping at the professional, college and high school levels.

It's time long snappers got their due credit.

So without further ado, we proudly present the inaugural edition of Page 2's Long Snapper Rankings:

Pontbriand was selected in the fifth round of the 2003 draft -- the highest pick ever used on a true long snapper. He's also a two-time Pro Bowl selection who The Cleveland Plain Dealer ranked No. 76 on a list of the best draft picks ever by the Browns.

Mannelly holds the Bears record for career games played. He's married to the daughter of former baseball star and surgical forerunner Tommy John and maintains longsnapper.com. He's also been known to ply his trade around the city of Chicago.

Loeffler signed a contract extension with the Vikings last week that makes him the NFL's highest-paid long snapper, averaging $1.14 million per year. The deal also assures that the NFL's longest-tenured kicking triplets will stay together in Minnesota.

DeOssie was the first player from Brown University invited to the NFL combine, where he ran a 4.53 in the 40-yard dash -- faster than Larry Fitzgerald, Arian Foster, Tim Tebow, Steven Jackson and Peyton Hillis. His father, Steve, also played for the Giants.

Paxton is the guy who famously made a snow angel after New England beat the Raiders in the Tuck Rule game in 2002. He was a member of three Super Bowl-winning rosters with the Patriots from 2000-08. The Pats haven't won a playoff game since he left.

Muhlbach filled in at punter at Texas A&M, giving him tremendous insight into both ends of the task at hand. Could he be the first long snapper inducted into the Pro Football Hall of Fame? His uncle John Muhlbach serves on the Hall's board of trustees.

Dorenbos is a character. He oozes charisma, whether he's playing locker room golf with Michael Vick, performing magic or serving as a Los Angeles tour guide. He was named to the Pro Bowl after the 2009 season and previously played for the Bills and Titans.

Leach played at Boston University until the school dropped football. Then he transferred to William & Mary. Now he plays for the Arizona Cardinals, who, contrary to various rumors, haven't dropped football. He owns a golden retriever named Snapper.

At 181 games and counting, Snow owns the Colts' longest current playing streak. If he reaches the 200 mark sometime next season, as expected, it's going to be a big party at Snapperz Family Fun & Sports, the recreation center owned by Snow.

Binn played for the Chargers from 1994-2010. Former teammate Nate Kaeding said of him, "He's like the Michael Jordan of long snapping." Also, he used to date Pamela Anderson. That's pretty much all you need to clinch the alumni spot on our list.