The Ottawa Senators will wear their new heritage uniform for the first time on Thursday night. And as is usually the case during the build-up to a new uniform's debut, the team has been releasing lots of photos, videos and other promotional materials to drum up interest in the new design.

But the Sens' marketing campaign has featured an unfamiliar face: this guy. That's Jacob Barrette, a 29-year-old Senators fan who lives outside of Ottawa. The reason he's part of the marketing campaign is that he designed the new jersey.

Here's the deal: When the Sens unveiled this uni set back in 2007, they didn't have an alternate jersey (all NHL teams went with just two designs that season, because they were still working out the kinks in the new Reebok Edge design template). But there was talk that alternates would start showing up in another year or two. Barrette, taking retro inspiration from the team's shoulder patch, came up with this concept and posted it on a Senators web forum, where it generated a groundswell of positive feedback.

Emboldened by this response, Barrette began drumming up local media attention, starting online petitions, and trying to contact the team, all in an attempt to get his design adopted. He'd just about given up when he finally heard from Sens marketing VP Jeff Kyle in 2009. Two years and a few design tweaks later, Barrette's uniform is finally ready for prime time.

It's hard to overstate how unlikely this chain of events is. Although there are tons of fans out there creating uniform concepts for their favorite teams, big-time sports franchises generally prefer to work with uniform manufacturers and with professional branding firms. The Senators' willingness to work with Barrette speaks not only to the strength of his design but also to the team's willingness to take a non-traditional route with its visual program. It's a heartening story, especially when viewed against the increasingly corporate backdrop of contemporary sports design.

Uni Watch recently convened a conference call with Barrette and Kyle to get the full story behind their partnership. Here's how it went. 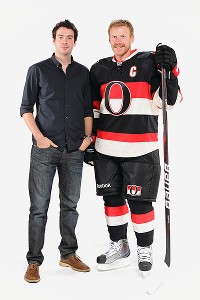 Courtesy of Ottawa Senators Daniel Alfredsson and designer Jacob Barrette, who waged a grass-roots campaign to get the Senators to adopt his design.

Jacob Barrette, Senators uniform designer: Yes. I do a variety of stuff, ranging from cultural posters to corporate brochures and governmental reports. I do a lot of branding and rebranding.

UW: Was this your first professional sports-related design project?

UW: What about non-professional projects? Like, lots of fans create uniform concepts and post them to message boards, just like you did with your initial Senators concept. Had you created a lot of other concepts in the past?

JB: No, that's pretty much the only one. It wasn't really a project. I was just designing something to give myself an idea of what the team's third jersey might look like.

UW: Wait a minute. There are loads of fans out there creating all sorts of design concepts, posting them to various websites, critiquing and analyzing each other's work. I know, because some of them send their designs to me! And you create one design and it ends up being used by an NHL team? That's pretty impressive -- you hit the jackpot on your first shot. Your only shot!

JB: I guess I did, yeah. I posted it to HFBoards, and then it sort of took on a life of its own.

UW: When did you come up with the design?

JB: When the Reebok Edge jerseys were introduced in 2007. It took me maybe a day. But I didn't post it to the web forum until nearly a year later, when rumors started flying about some franchises introducing third jerseys, toward the end of the 2007-08 season. I just wanted to get people's feedback. And the response was so positive that I started thinking about approaching the team with my design.

UW: Jeff, I'm sure you've seen lots of fan-submitted uniform and logo designs over the years. Judging by discussions I've had with officials from other teams, these unsolicited fan designs can end up being a real pain in the neck.

Jeff Kyle, Senators marketing VP: Yeah, we get them all the time. We don't really accept them, and the league tells us not to accept them.

UW: So what was different about Jacob's design, and how did you first become aware of it?

JK: When we introduced the shoulder patch, we knew that at some point in the future we would introduce a heritage uniform. I can't remember how, but someone had told me about the online forum and Jacob's submission. So I looked at it and I thought, "Let's see who this person is." Because I was thinking, in the back of my mind, that it might be a neat story to work on the new jersey with a fan.

UW: That's a really interesting decision on your part. I think a lot of people in your position would have rejected that notion out of hand. They would have just worked with Reebok to design the new jersey, or with the league. Like you just said, the league discourages fan-submitted designs, so it's pretty bold of you to go in that direction.

JK: Honestly, I didn't know what to expect when I contacted Jacob. I just wanted to find out what kind of person he was and see if he seemed like someone we could work with.

UW: Did you check with the league first before doing that?

UW: When you eventually told the league you were working with a fan, what was their reaction?

JK: They didn't really comment much one way or the other. But we figured as long as Jacob had a passion for the project, which he clearly did, and he seemed like a reasonable guy, then we could find a comfort level for working together.

JK: I'm not sure. Jacob, do you remember?

JB: It was the fall of 2009. By that time, it had been two years since I created the original design, and more than a year since I'd been trying to contact the team and get their attention. I'd done a round of interviews with local TV, radio and newspapers, and there was an online petition. But there hadn't been any response -- it looked pretty bleak.

UW: So what was it like when the phone rang and Jeff was on the other end of the line?

JB: I kind of froze a little bit -- it was pretty exciting. And keep in mind, at that point Jeff didn't know if I was a 10-year-old kid, or maybe some kind of lunatic.

UW: Which some uniform fans definitely are!

JB: Right, definitely. Well, like all of us designers can be. Anyway, he asked me to come down and meet with him, and then we took it from there.

UW: I'm not asking how much, but I assume Jacob was compensated at a professional rate for his design, right?

JK: Yes. And he's also done some additional work for us as part of our launch.

UW: Jacob, what's it going to be like for you the first time you see your design on the ice?

JB: It'll be exciting! I've seen it being worn for photo shoots, and that was great. For the better part of four years, this was something I was seeing on my computer screen, so to finally see it hit the ice for an NHL game's gonna be pretty special, for sure.

UW: It's a little unusual for uniform designers to get public credit. If you look around the sports world, most of us have no idea who designed a given uniform. Jeff, why did you decide to make Jacob part of the story of this unveiling?

Can't wait for Paul Lukas' next Uni Watch column? Get a daily dose of uni-centric news on the Uni Watch Blog.

JK: Because he is part of the story, so it made perfect sense to include him in that.

UW: This jersey design ended up leaking to the media a bit early. Was that frustrating, after you'd set up a carefully planned marketing strategy?

JK: The last time we launched a jersey, something similar happened. You go into these things almost expecting that they're going to start circulating before you intended -- nothing surprises me at this point. And once it happened, we just figured it's another opportunity for us to tell our story.

UW: Jacob, what about you -- once the design leaked, were you excited to see your design out there, being talked about?

JB: To be honest, I was disappointed because of all the effort that the marketing team had put in. And a lot of that has to do with how the jersey design relates to the history of hockey in Ottawa, which a lot of fans don't know about. And as the season goes along, I think people we start to see how the jersey relates to that.

UW: Jacob, do you play hockey yourself?

JB: Yeah, I'm in a recreational league. Nothing too serious.

UW: Will you start wearing your own design now?

JB: No, I'm not that guy. Being a designer, when I join a team I usually get asked to create the jersey for the team I'm on. It usually involves a beer label for some reason. But I'll be wearing the heritage jersey when I go to the Senators games.

UW: And now that you've designed your first professional-level uniform, do you want to do more of this?

JB: Definitely. I think I've found my passion with this project. And as a designer, pro sports is an industry where people are really proud to wear your design, so I'm hoping to branch out into more of that.

UW: If you could choose any teams to redesign in any sport -- teams that really need a makeover, and that you'd be happy to redesign -- which ones would you pick?

JB: I'd rather not say anyone "needs a makeover," because that sounds so negative. I do have my opinions as far as who might need one, but I'm not going to target any specific team. I'm happy to work with any team.

Fair enough. But even if Barrette never gets to design another uniform, he's already gotten further in the world of sports design than most people get. And he's given hope to every fan who ever sat down at the computer and said, "Here's how I'd like my favorite team to look."

Paul Lukas can think of a few teams that need a makeover, and then some. If you liked this column, you'll probably like his daily Uni Watch web site, plus you can follow him on Twitter and Facebook. Want to learn about his Uni Watch Membership Program, be added to his mailing list so you'll always know when a new column has been posted, or just ask him a question? Contact him here.