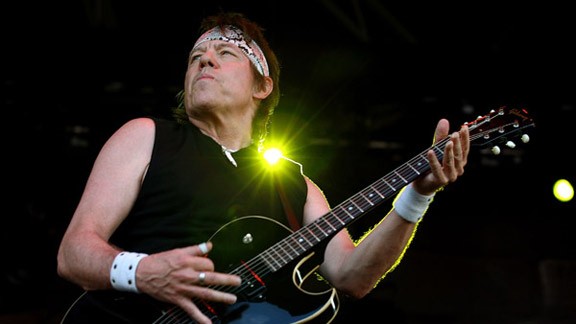 Paul Kane/Getty ImagesLegendary bluesman George Thorogood is a lifelong baseball fan with a soft spot for the Mets.

George Thorogood has been slinging guitar and playing the blues for nearly four decades.

He wrote and performed the legendary song "Bad to the Bone" and famously recorded classic covers of "One Bourbon, One Scotch, One Beer," "Who Do You Love?" and "Move It On Over" with his band, the Destroyers. He's known for energetic live performances and has tirelessly toured for the duration of his career. In 1981, his band followed up a tour with the Rolling Stones by playing shows in all 50 states during a 50-day span.

Blues guitarist George Thorogood recently fielded questions from ESPN.com users during an online chat. Check it out below:

Thorogood is also a huge baseball fan who played second base and swung a mean bat in the adult leagues of his native Delaware back in the day. Although Delaware is definitely Phillies territory, Thorogood isn't a fan. After the Phils' infamous collapse in 1964 -- they blew a 6.5-game lead with 12 games left -- he pledged his fanhood to the Mets, who were still in their infancy. Forty-seven years later, the Mets have given Thorogood two World Series championships to celebrate ... and also a litany of reasons to sing the blues.

The latest album by George Thorogood and the Destroyers is "2120 South Michigan Avenue," a collection of blues covers assembled in a tribute to Chess Records, the legendary record label once located at that Chicago address. The band also has tour dates booked through next May.

Page 2 recently caught up with Thorogood to talk about music and his love of America's pastime. Here's what transpired:

Page 2: How did you select the songs that you covered on your new album?

Thorogood: Most of 'em were selected by Capitol [Records]. It was their project from day one. They came to us with this idea. We put out an album called "Dirty Dozen" [in 2009], and we had a song called "Taildragger" that got a ton of airplay and a lot of sales through the Internet. They wanted to follow up with more of that and came up with the concept of a tribute to Chess. Most of the recordings were selected by them. 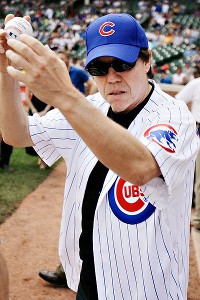 AP Photo/M. Spencer GreenThorogood warms up prior to throwing out a ceremonial first pitch at Wrigley Field in 2007.

Have you added any new wrinkles for the live show on this tour, or is it pretty much classic Thorogood and the Destroyers?

Wrinkles? Only on my face. Not any new wrinkles, but some new material, yes.

At this stage of your career, do you ever get tired of touring?

Ask [Justin] Verlander if he ever gets tired of the sound after he strikes somebody out. You follow my point?

What's the craziest story you can share about touring with the Rolling Stones in 1981?

There are none. The Rolling Stones are a top-shelf professional outfit all the way, and there was nothing that I would say that would be crazy. ... I would like to say I'm the only guy who worked with the Stones and I saw no dope, no drugs, no TVs getting thrown. Leave it to me -- I show up and everybody turns into a Boy Scout. That's just Thorogood's luck.

How important was that tour as a tipping point for the popularity of your band?

We got some attention, and it got the attention of a major record label, EMI America, so it helped.

If you could invite any five bluesmen to jam, living or dead, who would you choose?

I'd like to bring back Robert Johnson. He's No. 1. Everybody would say that. Leadbelly, who I never saw. Skip James, who I never saw. Elmore James, who I never saw, and I'd like to bring back Freddie King, because not enough people saw him. As far as the entire package goes, the greatest live bluesman I ever saw was Freddie King. He had it all -- powerful voice, powerful guitar, stage presence, the whole works. No one could get close to Freddie. But the other guys I mentioned passed on before I really even picked up a guitar. 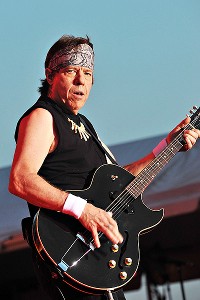 Bobby Bank/WireImageThorogood performs at a 2010 concert in New Jersey.

Did you once own a ballpark back in Delaware?

You're a big Mets fan. What are your impressions of Citi Field?

I've never been there. But if they ever get themselves financially together and out of their fraud situation ... if I was a player like Jose Reyes or if I was a pitcher, I would sign with that club. It's not a home run ballpark, and the game is about the long ball these days. Look at all the ballparks: Baltimore, Philly, Cincinnati, Pittsburgh -- I mean, they're like Little League parks. That ball just flies out of there. The long ball rules. But Citi Field isn't a home run park. If I was a top-level pitcher and they had their organization a little more together, I would try to sign there because you'd win a lot of games. They're not going to take you deep in that park too often. ... [and] if you're a player like Reyes, who can run like a fox and hit all those triples, it's an ideal park for him.

Oh, the '86 Mets. They're closer in age to me. ... My idea of partying is sitting at a bar and nursing a beer for two hours and talking baseball. I did that in Pittsburgh once. I was with Ed Lynch and Keith Hernandez, and for about three hours we went through two beers and 50 years of baseball. That's my idea of partying.

Keith Hernandez is great to talk to. He's my favorite announcer. He's articulate. He's intellectual. He knows the game. He comes from a side that's not a real jock side. He's got a style, and I really enjoy his approach to the game. You know what Keith Hernandez once said? He said he couldn't get interested in the game until his team was losing by about three runs. He didn't think the game was interesting until then. Isn't that amazing? That's a champion. Joe Montana didn't start playing [hard] until the fourth quarter, when his team was down by two touchdowns. Keith's brain would wake up down by three runs. He'd say, "Now the game's interesting to me. If we're up 10-0, it doesn't mean anything." That's a real gamer.

Tom Seaver to the Reds. He was the franchise. Nolan Ryan was unproven then. He was a flamethrower who couldn't find the plate. They didn't know whether to start him or relieve him, and they had pitching then. They had [Jerry] Koosman. They had [Tug] McGraw. They had Seaver. They had [Gary] Gentry. They had pitching. So at that point, it made sense. 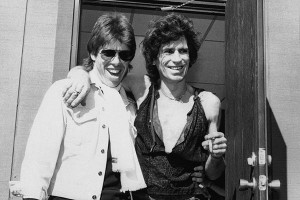 AP PhotoThorogood lived a musician's dream when he toured with Keith Richards, right, and the Rolling Stones in 1981.

When they got rid of Tom Seaver, I said, "That's the man that put the team on the map." That was a terrible trade. And what did all those guys do after that? I mean [Doug] Flynn won a Gold Glove in 1980, but that's about it. Dan Norman, Pat Zachry and Steve Henderson didn't really pan out into anything. With all due respect to those players, Tom Seaver was the draw. That broke his heart, and at the same time, I think he was kind of run out of town by the media, if you want my honest opinion. I think much more there than just the front office saying, "We need another hitter in the lineup; we've got enough pitching."

Talented. Had all the tools. I think Darryl might've been brought up to the big leagues a little too soon. If he had just a little more training in the minor leagues on how to hit left-handers, there's no telling what he could've done. Let me put it this way: Hall of Fame potential.

Gene Mauch [manager of the '64 Phillies].

Overrated. They call him one of the greatest managers ever, yet his [winning] percentage is under .500. [Editor's note: Indeed. It's .483.]

Al Weis [light-hitting Mets utility player who had winning hit in Game 2 of the '69 World Series and tying homer in Game 5].

Every dog has his day.

You know, I always respect the owners. I try to, and I've always had respect for him, but I don't think it was real nice what he was sayin' about Carlos Beltran earlier this season. I don't think that was necessary. Even though he's the owner, and he pays for him. That bothered me. Personally, I don't think Beltran should've been standing there with a bat on his shoulder [striking out looking to end Game 7 of the 2006 NLCS], but I don't think an owner should say something like that about one of his players -- not in the press. Other than that, I was a Fred Wilpon fan. He got some good people into the Mets. But that kind of rubbed me the wrong way as a Met fan.

Do you have any baseball mementos or memorabilia?

All my memorabilia, and all my cherished things are in my heart and in my brain -- although I do have a baseball cap that was autographed by both Joe DiMaggio and Willie Mays. That's the only thing I got -- only the two greatest players who ever played. (Laughs.) I don't believe in collecting things. I'm fond of saying, "It's not the things that touch your hands that matter, it's the things that touch your heart."