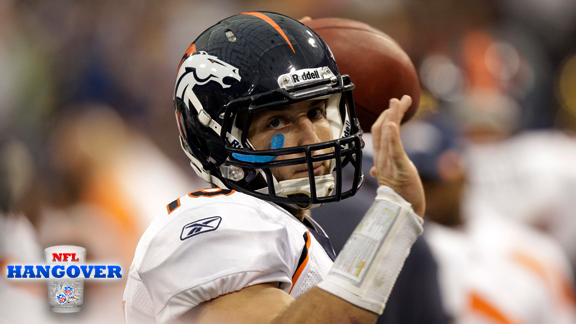 AP Photo/Charlie NeibergallWhat will it take for Tim Tebow to win over the the nation of detractors who still doubt his abilities?

In my spare time away from being a titan of the written and spoken word, I dabble as a scientist. Recently, I have been studying Tim Tebow haters -- scientific name: Haterus Tebowis -- to see how their characteristics and population have changed over time.

What follow are my findings as well as hypotheses for the future of Haterus Tebowis species.

Tebow performance: Filling in for the ineffective Kyle Orton in the second half, Tebow nearly rallies Denver to a victory over the Chargers.

Haterus Tebowis comments: "That was adorable. But if John Fox listens to these stupid Denver fans and starts Tebow in a game next week, he needs to have his head examined."

Haterus Tebowis comments: "Big deal. He beat the Dolphins. They stink. And if Tebow wasn't so terrible, Denver never would have been trailing in the first place."

Tebow performance: The Broncos lose 45-10 at home to the Lions, as Tebow throws 39 passes, completing just 18.

Haterus Tebowis comments: "Ha! See? We told you! This guy is nothing but a fullback. And he doesn't even throw well for a fullback."

Tebow performance: Running an offense designed more for his unique abilities, Tebow throws for two touchdowns and runs for 113 yards as the Broncos score 31 second-half points to beat Oakland 38-24.

Haterus Tebowis comments: "Oooh! Now he has wins against the Dolphins and Raiders. Fancy! And it's not like he had anything to do with the win anyway. Willis McGahee ran for 163 yards and two touchdowns. This winning is not going to last."

Haterus Tebowis comments: "What a joke. He's embarrassing the NFL. I mean, 2-for-8? So pathetic. If it wasn't for Denver's defense, Tebow would be nothing. So now he has wins against the Dolphins, Raiders and Chiefs. Big deal. Wait until he has to play a real defense next week when the Jets come to town."

Tebow performance: Tebow makes a 20-yard touchdown run with 58 seconds left to cap a 95-yard drive, giving the Broncos a 17-13 win over the Jets.

Haterus Tebowis comments: "The Jets are so overrated. How do you let Tim Tebow go 95 yards on you? They should be ashamed of themselves."

Tebow performance: Tebow throws for 143 yards and a touchdown and runs for 67 yards as Denver beats San Diego 16-13 in overtime.

Haterus Tebowis comments: "Another week, another game in which Tebow gets credit for the accomplishments of Von Miller and the Denver defense. What a joke."

Tebow performance: Despite a poor performance by a Denver defense playing without Von Miller, the Broncos win 35-32 on a last-second field goal. Tebow's passing leads Denver's offense in the second half, and he finishes the game 10-for-15 for 202 yards and two touchdowns.


Based on the previous eight weeks, science allows us to accurately predict the remainder of the season.

Tebow performance: Tebow answers a late Tom Brady drive that gives New England a four-point lead with 1:30 remaining by engineering an 85-yard touchdown drive to give Denver a last-second win.

Haterus Tebowis comments: "So Tebow has now beaten one top quarterback. That's it. Only one. And Brady isn't even the best quarterback in the league anymore. Aaron Rodgers would totally kill Tebow."

Tebow performance: The Broncos clinch the AFC West title with a win over the Bills.

Haterus Tebowis comments: "Of course they did. Tebow is so lousy, the AFC West is the only division he could ever hope to win. Tebow and the AFC West both suck equally."

Tebow performance: Tebow and other Broncos starters are rested for the playoffs during the second half of Denver's regular-season finale against the Chiefs. Backup Brady Quinn throws a touchdown pass in the fourth quarter.

Haterus Tebowis comments: "See! They can even win with Brady Quinn. Tebow is just lucky to be on a stacked Denver team."

Tebow performance: A last-minute touchdown run by Tebow leads Denver into the divisional round.

Haterus Tebowis comments: "You're supposed to win home playoff games. This proves nothing."

Tebow performance: The Broncos knock off the AFC's top seed on the road.

Haterus Tebowis comments: "No one remembers divisional-round wins. Win a Super Bowl, or history will forget you.

Tebow performance: Tebow leads a second-half comeback as the Broncos advance to the Super Bowl.

Haterus Tebowis comments: "Good. This is what I wanted to happen all along. I want everyone in the country to see Tebow get humiliated by Aaron Rodgers. It's going to be awesome. I've never been so excited for a Super Bowl."

Haterus Tebowis comments: "Looks like we have a new worst quarterback to ever win a Super Bowl."

"I was glad that they iced their kicker at the end, so I didn't have to do it."

-- Cardinals head coach Ken Whisenhunt, on Jason Garrett's timeout that took a game-winning Dan Bailey field goal off the board

What we witnessed was just another benefit of Garrett's Princeton education. He's so smart, he's always one step ahead of his opponent. "You're going to ice my kicker? Not if I do it first, dummy!"

Madonna was announced as the Super Bowl halftime act on Sunday night, meaning the average age of Super Bowl performers since Janet Jackson's "wardrobe malfunction" is 54.8 years old. The NFL probably thinks that booking older acts cuts down on the likelihood that skin will be bared. However, there is a great risk that should another "malfunction" happen, the entire country will be subjected to an image of 50-something flesh so revolting that no one will ever want to have sex again, and America will die out. NFL: Pick more relevant acts or have the end of America on your conscience. It's your choice.

"You should know that I have a sack full of toys."

Just so we're clear: these photo captions are addictive. But they're low in calories!
DJ Gallo's NFL Hangover photo gallery

"So Philip Rivers walks into a bar and the bartender says: 'Why the stupid face?'"

"Hey, guys! Don't think that because there's no one here that it's an exhibition game. This is still a real NFL game."

"I think I'm just going to stand here until the second half."

"Turns out you're worthless without a good quarterback, huh?"

"No, Tony, you can't use this during the game."

"Come on! You can do it! You're catching me! So close. Closer. Closer. Oh, bummer. Touchdown."

"Here's the plan: We're just going to screw with them until the final minute."

"It's funny. We don't pay our players anything, yet we've been to a Super Bowl in the past 15 years and you haven't. It's hilarious, actually."

"Don't worry about it. Everyone will just blame Romo."

To Cowboys coach Jason Garrett: "You were a legacy admission to Princeton, weren't you?"

To Bears coach Lovie Smith: "Have you consulted with Maurice Jones-Drew via Twitter on how you should handle Matt Forte's MCL sprain?"

To Dolphins coach Tony Sparano: "What's it like to coach the best team in the NFL?"

2. If I feel better tomorrow, I might have 5 Things and Chargers-Jaguars photo captions tomorrow in the Page 2 blog.