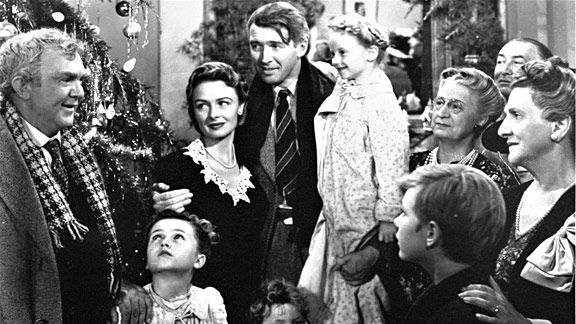 AP Photo"It's a Wonderful Life" is a No. 1 seed in Page 2's Christmas movie bracket. Can it bring home the title?

I've seen "It's a Wonderful Life" more often than any other movie, probably close to 50 times. I even wrote a college essay on it. Each year, my old college friends and I make a pilgrimage to Seattle's cozy Grand Illusion theater to watch its annual showing. While the movie's flaws stand out with each viewing -- should you really trust your savings to a building and loan with a goofy partner who has a pet squirrel and can't even keep track of $8,000? -- I still tear up when I hear Harry Bailey say, "To my big brother George, the richest man in town."

"It's a Wonderful Life" is a national institution, but is it the best Christmas movie of all time? Is it better than "A Christmas Story" or "Bad Santa"? Is old man Potter meaner than Ebenezer Scrooge, Scut Farcus or Hans Gruber? Who is the best child in a Christmas movie -- Ralphie, Zuzu, Kevin McCallister or Thurman Merman? Which department store has the best Santa -- Macy's, Higbee's or Chamberlain's?

With so many movies and so much competition, there is only one sensible way to settle the issue: with an NCAA-style bracket!

East Region
1. "It's a Wonderful Life": If old man Potter were alive, he would foreclose on the Dodgers and sell off Matt Kemp and Clayton Kershaw for parts.
16. "Santa Claus Conquers the Martians": Frequently listed among the all-time worst movies but even worse is its sequel, "Santa Claus Goes to Japan."
Outcome: "It's a Wonderful Blowout."

5. "Black Christmas": A very scary slasher movie directed by Bob Clark, the same guy who did "A Christmas Story." That's like a guy playing quarterback AND linebacker.
12. "Mixed Nuts": It's about a crisis hotline clinic at the holidays, not the 2009 Cubs roster.
Outcome: May all your Christmases be "Black."

4. National Lampoon's "Christmas Vacation": "Is your house on fire, Clark?" "No, Aunt Bethany, those are my Christmas lights." Or Vancouver is rioting over the Canucks again.
13. "The Santa Clause 2": Most annoying series of sequels since the Yankees 1996-2000.
Outcome: Griswolds advance, but hopefully not in a station wagon with Granny strapped to the roof.

6. "Arthur Christmas": I haven't seen it yet, but I assume it's about that old white-haired guy -- Arthur Rhodes.
11. "Babes in Toyland": Sadly, it's not about the USC Song girls.
Outcome: "Arthur" advances. Babes can come over to my house for eggnog.

3. "Die Hard": Ho-ho-ho and yippee-kai-yay!
14. "Fred Clause": It still always fascinates me Paul Giamatti is former commissioner Bart Giamatti's son. But I'm more amazed such a good actor could be in such a bad movie.
Outcome: You don't want to see Fred after Bruce Willis finishes him off.

7. "The Santa Clause": What's worse than signing a closer to a $50 million contract? Basing a movie around a single, silly pun.
10. "The Family Man": Oddly, not a heartwarming Christmas story about Travis Henry.
Outcome: "The Family Man" in a mild upset.

2. "Love Actually": I know. A guy saying he loves this movie is like saying you love figure skating. By the way, did you know 2010 Olympians Amanda Evora and Mark Ladwig skated to this movie's theme music?
15. "Christmas With the Kranks": Christmas with the McCourts might be preferable.
Outcome: "Love Actually." I will now hand in my man card.

Southeast Region
1. "Miracle on 34th Street" (original version): If there really is a Santa Claus who spreads joy and gives everyone what they want, how come Daniel Snyder still owns the Redskins?
16. "Deck the Halls": Richard Roeper's review: "You cannot believe how excruciatingly awful this movie is. It is bad in a way that will cause unfortunate viewers to huddle in the lobby afterward, hugging in small groups, consoling one another with the knowledge that it's over, it's over -- thank God, it's over." Or was that his review of the 2011 Colts?
Outcome: No Miracle needed for 34th Street to deck the Halls.

8. "Scrooge" (the 1970 musical): In this musical version, Scrooge tells Minnesota that if it doesn't build him a $1.25 billion stadium he'll move the Vikings, fire Cratchit and burn Tiny Tim's crutch.
9. "This Christmas": According to IMDb, it grossed nearly $50 million on a budget of $13 million, making it the Tampa Bay Rays of holiday movies.
Outcome: "This Christmas" there are no singing Scrooges in the second round.

5. "Joyeux Noel": The true story of World War I troops spontaneously leaving their trenches to share a Christmas in peace with the enemy. See? There is hope for Red Sox and Yankees fans.
12. "All I Want for Christmas": ... is that my wife doesn't give me a baseball Derek Jeter autographed for her.
Outcome: Ode to "Joyeux."

4. "Home Alone": Enormously popular but it would be better with Li'l Wash instead of Macaulay Culkin.
13. "Ernest Saves Christmas": Sure, but could he save the Clippers?
Outcome: "Home Alone" for Child Protective Services to get him in second round.

6. "The Bishop's Wife": Cary Grant descends from heaven to help raise money for a church. But my favorite case of divine intervention is still the immaculate reception.
11. "One Magic Christmas": I believe Lifetime airs this on a continuous loop between Thanksgiving and Christmas. But try filling that slot without a single broadcasting deal from the NFL, NBA, NHL or NCAA.
Outcome: No magic here, "Bishop" advances.

3. "Scrooge": Did you know Art Modell is based on Alastair Sim's classic portrayal of Ebenezer Scrooge?
14. "Prancer": The movie is bad enough, but at least it's not about a dancing grounds crew.
Outcome: "Scrooge" says "Bah, humbug" to "Prancer."

7. "Rare Exports": An offbeat Finnish horror/comedy about a corporation digging up the real Santa Claus, and trust me, everyone is on this Santa's naughty list. This is the Santa that Cleveland fans are accustomed to sliding down their chimney.
10. "The Holiday": Cameron Diaz and Kate Winslet swap homes. Then Diaz gets Jude Law while Winslet gets Jack Black in the most lopsided trade since Heathcliff Slocumb for Jason Varitek and Derek Lowe.
Outcome: "Holiday" hours extended.

2. "The Ref": Fortunately, this is a great, often overlooked black comedy with a terrific Kevin Spacey, Judy Davis and Denis Leary rather than a documentary about Ed Hochuli.
15. "Surviving Christmas": The only thing worse than this movie would be surviving Christmas without an NBA, NHL, NFL or bowl game to watch instead of talking to your relatives.
Outcome: All the calls go to "The Ref."


1. "A Christmas Story": All I want for Christmas is an official Red Ryder Carbine-Action 200-Shot Range Model Air Rifle with a compass on the stock and this thing that tells time. And that the Mariners sign Prince Fielder.
16. "A Christmas Tale": This supposed French comedy was the absolute worst thing I saw in 2008, apart from the Lions' season highlight tape.
Outcome: Ralphie would win this mismatch dressed in pink bunny pajamas.

8. "The Ice Harvest": With an excellent cast featuring John Cusack, Billy Bob Thornton, Randy Quaid and Oliver Platt, I expected better, as I also did for the 2011 Giants.
9. "Blizzard": Either a heart-warming Christmas indie or an advance look at the 2012 World Series.
Outcome: "Harvest" time.

5. "Holiday Inn": The basis for "White Christmas," this features a Fred Astaire drunken dance in which he was actually drunk. It's the best performance by an inebriated man, other than half of David Wells' starts.
12. "Silent Night, Deadly Night": The official slogan for the 2011 St. Louis Rams.
Outcome: "Holiday Inn" upgraded to a second-round corner room.

4. "The Muppet Christmas Carol": Anyone who doesn't like the Muppets probably doesn't cry at the end of "Brian's Song."
13. "Santa Clause: the Movie": Rule of thumb: If any part of the name Santa Claus appears in a title, it won't be good. Same for a jersey with Minnesota on it in 2011.
Outcome: Even Statler and Waldorf give this victory to the Muppets.

6. "Frozen River": It received Oscar nods, but the story is so depressing you'll envy Pirates fans.
11. "Trapped in Paradise": I would rather be trapped in a Giants jersey at an Eagles game than watch this movie again.
Outcome: Old man River keeps flowing.

7. "While You Were Sleeping": Sandra Bullock falls for a man left comatose from a vicious blind-side tackle by Lawrence Taylor.
10. "Jingle All the Way": Proper punishment for steroid user? A ban from competition, watching a comedy with Sinbad or electing him governor of California.
Outcome: Arnold and Sinbad aren't as bad as you might imagine. "Jingle" in an upset.

2. "The Shop Around the Corner": The difference between this and the remake "You've Got Mail" is only slightly less than that between Jose and Ozzie Canseco.
15. "The Santa Clause 3": Fortunately, like that Yankees 1996-2000 postseason run, this series finally ended.
Outcome: Jimmy Stewart in a knockout.


1. "White Christmas": When I watch Danny Kaye perform "Sisters" with Bing Crosby, I think, "This man once owned the Mariners."
16. Dr. Seuss' "How the Grinch Stole Christmas": Definitely NOT to be confused with the cartoon. This one stars Jim Carrey, and I'd rather have a hideous green creature break in and steal my every possession, including my baseball autographed by Willie Mays and Willie McCovey, than watch this again.
Outcome: How the Grinch Lost by 40 Points

5. "We're No Angels": A Christmas comedy starring Humphrey Bogart? And you thought the Cardinals postseason run was improbable.
12. "Four Christmases": Some early fun, but it soon loses steam and goes on too long. Like the 2011 Pirates.
Outcome: Upset! No Angels in the second round.

6. "Christmas in Connecticut": Fortunately, it's with Barbara Stanwyck and Dennis Morgan, not Geno Auriemma and Jim Calhoun.
11. "The Family Stone": New Yorker Sarah Jessica Parker spends very unpleasant holidays with her future in-laws when she learns they're Boston fans.
Outcome: It's second round in Connecticut.

3. "The Nightmare Before Christmas": Otherwise known as the Poulan Weed Eater Bowl.
14. "Jack Frost": Michael Keaton dies and comes back to life as a snowman in the worst comeback until Brett Favre's next one.
Outcome: Your long national Nightmare continues.

2. "In Bruges": Actually, I'm not sure this is a Christmas movie. But it's a great black comedy and it takes place amid snow and chocolates and the exquisite Belgium town of Bruges, so it seems like Christmas to me. Plus, in addition to Colin Farrell, Brendan Gleason and Ralph Fiennes, it has the best performance by a dwarf outside of Eddie Gaedel.
15. "Elves": I've never seen it, but Wikipedia says the plot involves skinheads impregnating a waitress with one of Santa's elves. And you thought the Purdue-Western Michigan matchup in the Little Caesar's Pizza Bowl sounded bleak.
Outcome: Christmas movie or not, "In Bruges" wins easily.

Midwest Region
1. "A Christmas Story"
8. "The Ice Harvest"
Outcome: Ralphie shoots the lights out ... as well as his eye.

5. "Holiday Inn"
4. "The Muppet Christmas Carol"
Outcome: No room at the Inn for Kermit.

10. "Jingle All the Way"
2. "The Shop Around the Corner"
Outcome: Jimmy Stewart terminates Arnold.

6. "Christmas in Connecticut"
3. "The Nightmare Before Christmas"
Outcome: Connecticut wakes up from Nightmare to advance.

7. A Very Harold and Kumar Christmas
2. "In Bruges"

Outcome: Bruges is THE Christmas destination.

East Region
1. "It's a Wonderful Life"
5. "Black Christmas"
Outcome: Even serial killers no match for Potter.

3. "Die Hard"
2. "Love Actually"
Outcome: And did I mention the Claudia Schiffer cameo?

Outcome: And this year's Christmas is in ... Bruges.

Southeast Region
1. "Miracle on 34th Street" (original version)
2. "The Ref"
Outcome: The ability to call technicals comes in handy for "The Ref."

Midwest Region
1. "A Christmas Story"
2. "The Shop Around the Corner"
Outcome: Story gets A++++++ and trip to Final Four.

1. "It's a Wonderful Life"
1. "A Christmas Story"
Outcome: To my big brother George, the richest movie in town.