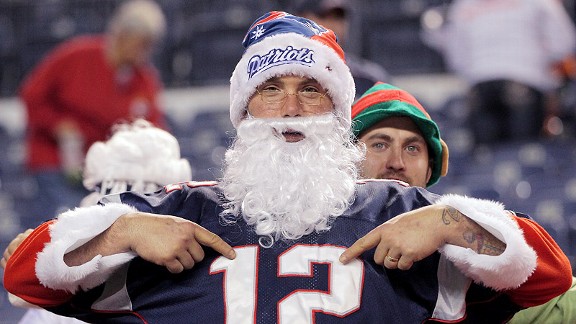 Twas the night before Christmas, when all through the NFL
Twenty-six teams were in action, risking fines from Goodell.
The Steelers were handling Big Ben with care,
Because losing to the Rams is incredibly rare.

Peyton Manning was nestled all snug in his bed,
While visions of the second pick danced in his head.
And Matt Ryan was sleeping, and Drew Brees the same
They were getting some rest for their Monday night game

When up in Buffalo there arose such a clatter
(although the game was blacked out there, to the locals it did not matter).
Away to my remote I flew like a flash,
My Tim Tebow fever turned in a rash

The look on the face of the new-fallen Tebow
Made us wonder again: "Does this guy just blow?"
When, what to my wondering eyes should appear,
But the New York Jets, a title contender, I hear.

Coached by a twin brother, so large but not quick
A guy who is surprised by each Sanchise pick.
More rapid than ever his curses they came,
And he yelled and he screamed and called Giants some names

"Screw Eli! Screw Victor! Screw Bradshaw and Coughlin!
Screw Pierre-Paul! Screw Webster, go ### yourself, Brandon!
My team is the best, except for throwing the ball.
So my predictions look stupid! Every one! All!"

As Dolphins must do before their season does die,
they got on a plane and to New England did fly.
So up to a stunning 17-point lead they right flew.
With plays from Matt Moore, and help from Brady, too.

And then, after halftime, with New England's hole fully dug
came the prancing and pawing of a man wearing Uggs.
As I grabbed my remote and turned up the sound,
Down to defeat Miami came with a bound.

Romo was dressed all in bandages, his hand had a wrap,
But it didn't a bit matter, 'cause the NFC East is all crap.
Each team in the division deserves to be in the back,
And they must all know they'd get killed by the Pack.

Andy Dalton's eyes -- how they twinkled! His dimples -- how merry!
His cheeks were like roses, his red hair more cherry!
His droll little mouth was drawn up like a bow,
In his way he's as good as the Cam Newton Show.

The stump of a marker Andy Reid held tight in his teeth,
And ideas for bubble screens circled his head like a wreath.
He had a broad face and a massive round belly,
Yet he rarely did laugh because the Dream Team was smelly.

The roster was expensive and plump, like a Dan Snyder production.
And we laughed when they lost, thanks to their myriad dysfunction.
But with a wink of Reid's eye and a twist of his head,
We knew that he no longer had his firing to dread.

The eliminated Eagles spoke not a word, but went straight to work,
And dismantled McGee and that Rob Ryan jerk.
Meanwhile, laying an egg to another of his foes,
Up the hot seat rankings, Norv Turner he rose!

There was nothing to stop it, no timeouts or whistle,
No penalties, no ejections, no Ndamukong bristle.
And I heard the Lions exclaim, as they walked out of sight,
"We're in the playoffs! The Lions! That doesn't seem right."

"I told him I'll punch him in the face. I told him out of all these Giants players on this team you're talking to the wrong one. And that was that." -- Brandon Jacobs, on what he said to Rex Ryan after the Jets' coach confronted him after the Giants' win.

Note to future Giants opponents: According to Giants running back Brandon Jacobs, everyone on the team is easy to intimidate except Brandon Jacobs.

Although his helmet took Tony Romo out, Jason Babin of the Eagles failed to record a sack against Dallas, leaving him three short of Reggie White's single-season team record of 21 and five short of Michael Strahan's NFL record of 23. The Eagles play the Redskins next week, the Redskins need a quarterback, and the Redskins have a history of making terrible signings. Sign Brett Favre, Redskins, and let's get Babin the sacks record.

This Week's Horrible Team That Could Have Won Your Fantasy League

"You inspire me to be a better backup."

"Yes! This is more like it! You're finally playing how I hoped you would!"

"I'm going to put my hand away for a while. It's not working."

"I never stole as much as Chris Johnson is."

"Great. Now we have to play the Colts. They're going to kill us."

"I really appreciate you taking a few hours off from making toys and loading the sleigh to help us out."

"Thanks for the handshake, but I have no idea who you are."

"Sanchez! I'd have you killed in a fictional world!"

"That guy there might not have quit on me, but -- yeah, everyone else has."

"This must be how my brother feels every day."

"I hope we can still keep in touch."

"Congratulations, man. You can achieve your dream of getting ejected from a playoff game."

"This had better not mess up my golf swing."

Rex Ryan: "What is your favorite crow recipe?"

Jim Schwartz: "Would you say you can now be mentioned alongside the likes of Bobby Ross and Wayne Fontes in the discussion about greatest Lions coach of the modern era?"

Andy Reid: "Why are you not jolly?"

1. The Lions last made the playoffs in 1999. The other 11 teams in the playoffs that year were the Rams, Jaguars (both No. 1 seeds!), Buccaneers, Colts, Redskins, Seahawks, Vikings, Titans, Cowboys, Bills and Dolphins. What a collection of modern-day football failure. Of all the supposed sports curses, the 1999 NFL Playoff Team Curse may be the worst ever, and I only heard of it one sentence clause ago.

2. So much for the belief that Tim Tebow is perfect. Throwing interceptions is not a sin. But hating someone is a sin. And Tebow clearly hates John Elway. He goes out of his way to make Elway look stupid. When Elway didn't support Tebow? Tebow couldn't stop winning. And when Elway finally came out in support of Tebow? Days later, Tebow played his worst game of the season. When Tebow is Tebowing, he may just be thinking up elaborate pranks to humiliate his boss.

3. Cam Newton now has one fewer win on the season than Tebow. Maybe there's something to be said for looking good and putting up impressive stats after all. Weird.

4. So after getting crushed by the Giants, Rex Ryan reportedly still yelled to Brandon Jacobs that the Jets were going to win the Super Bowl. With how much the man curses, we may have to consider that he has untreated Tourette's and that he believes "Super Bowl" is the most crude term in the English language.

5. Everyone got a little bit too excited about Vikings tight end Kyle Rudolph scoring a touchdown on Christmas Eve. If the real Rudolph actually played in the NFL, I'm sure he would be heavily fined because his red nose would be a seen as a celebration prop or a violation of the uniform code. Probably both.