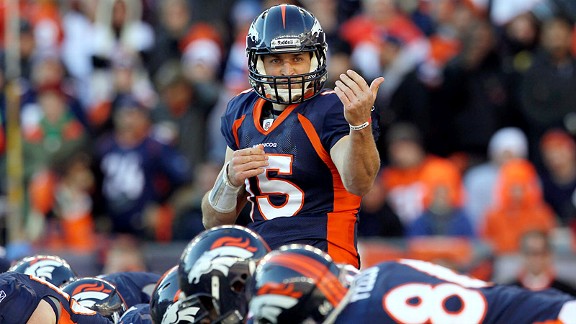 Editor's note: Art Garfamudis originally wrote for Page 2 in 2008 before he retired to dedicate himself to preparing his safehouse for any number of civilization-threatening crises. The depletion of his potable water, dried food and ammunition has lured him out of retirement to again present his unique perspective on the sports world in a new column, "Art for Art's Sake."

It seems like wherever you look, people are talking about Tim Tebow, the second-year signal-caller of the AFL-refugee Denver Broncos. So, naturally, my editor wants me to write something about him. What can be said about him that hasn't already been said? That's what I intended to find out when I sat down at the typewriter.

This is what I discovered:

1. What's the big deal with this guy?

Every team has to have a starting quarterback, right? And a backup. And then another backup just in case. That's something like 100 guys in the NFL with the same job title. Tebow just happens to be one of them, so it's not like he's in a unique position or anything. I guess it's what he makes of the job -- not the job itself -- that gets people's attention.

And he gets a lot of it. As it turns out, he's a very polarizing fellow. I went for a stroll around the farmer's market yesterday. I took an informal poll of people I met. One-third liked Tebow, one-third disliked him and one-third either didn't speak English or pretended not to understand me.

2. Does God play favorites on Sunday?

According to another poll, "43 percent of those who said they were aware of Tebow's success believe it's at least partly the result of divine intervention." I asked my clergyman about this, but he was too upset to answer because he lost a bundle betting on the Steelers last week.

3. Is it because Tebow was home-schooled?

I don't blame parents for home-schooling their kids. No home-schooled child ever got beaten up for their lunch money or forced to wear a rhinestone tiara by a guy named "Bull" or thrown in a locker for nine days straight -- not that any of that happened to me.

4. Are comeback victories better than the other kind of victories?

Of course they are. Anyone can win a football game by taking a lead on the opponent and holding that lead for the duration of the game. It takes a special kind of man to repeatedly fall behind and have to struggle to overcome adversity. If I had to guess, I'd say a comeback win is worth 1½ non-comeback wins -- and that goes double in the playoffs.

He makes people talk about football. The NFL desperately needs publicity, and he gives it to them. Without players like him, the fans' attention would drift off to the NBA, WNBA, ice hockey, schoolboy football, Olympics and so forth. Many would give up on sports entirely. Others would contemplate suicide.

6. Does Tebow unwittingly help Satan every time he plays?

Ironically, yes he does. According to Pregame.com, the Denver-New England game on Dec. 18 was the most heavily bet-upon game of the regular season. People like wagering on his games, and Satan loves it when they do that. Tebow's only hope of combating this?

7. But what do the numbers tell us?

I don't know how the football commissioner calculates quarterback rating. I have my own formula. It looks like this:

8. Do statistics even matter?

No. They never have, and I don't trust them anyway. You know who uses statistics a lot? The federal government -- and look at the trouble that's gotten us into.

9. The heck with Saturday's game; what about the future?

Sure, this divisional-round showdown against the Patriots is a big game, but what about next year and the years to come? Mark my words: Tebow is going to be president of the United States someday. You have my personal guarantee on this. I'm thinking that he'll be the Republican candidate in 2036. He can put his three Super Bowl trophies (none of which are from this year because the Pats are going to bounce the Broncs, 38-25) on his desk in the Oval Office to intimidate foreign potentates.

10. What is my conclusion about Tebow?

He is evil incarnate.

Because he's left-handed. As most thinking people know, lefties -- or "sinisters" -- are unnatural freaks who, fortunately, comprise only a small part of the population. Only political correctness and common human decency keep us from exiling them to penal colonies in Greenland. Instead, we let them roam freely among us.

We owe ourselves a pat on the back for that.

Artemis Arthur Garfamudis originally studied typing at the Miss DuPrix School of Business on Route 22 in North Plainfield, N.J. He has since taken several refresher typing courses. It is with great pride that he types all his own columns.