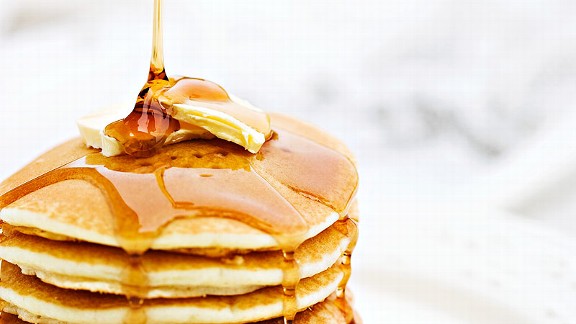 Thinkstockphotos.comCould this stack of pancakes actually cause an injury to a Los Angeles King?

It sounded like an oddity when first mentioned but every man who has ever been in a relationship knows what really happened when Los Angeles Kings winger Dustin Penner was dropped from the lineup due to a back injury suffered while eating his wife's pancakes. 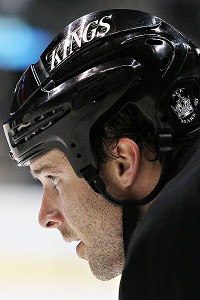 Did I stutter? His back went out while eating pancakes. At least here is his explanation originally given to Rich Hammond of L.A. Kings Insider: "I woke up fine, sat down to eat and [my back] locked right up. It never happened to me before. I couldn't stand up. I was probably at the third stage of evolution."

Penner wasn't quite finished stressing the quality of the pancakes: "Apparently it's one of those mysterious things, where you can throw it out [from] sneezing. I just leaned over to dip into some delicious pancakes that my wife made."

Actually, he probably really did injure his back just as he said. And he's now sponsoring a "Pancakes with Penner" breakfast that will raise money for charity. No word on if his wife will be cooking those pancakes but we'd hate to see a whole roomful of back injuries.

No pancakes on the Brunch menu, just some outstanding dishes from our literary chefs. While they are pouring on the syrup, we'll digest a few bits of tid from the week that was:

• Bucket list: Drinking beers while sitting on the Dallas Mavs bench during a game. Check.

• Quote of the Week I from Green Bay WR Greg Jennings about spending time on WR Jordy Nelson's family farm: "We did farming things. We got to see how they artificially inseminate cows. We actually did it. You've got to stick your hand in there. It was nice and warm." Make your comment now. I'm staying out of it because my cat is looking at me funny.

• Quote of the Week II from boxer Wladimir Klitschko: "Beating up people for a living is really fun." Yeah, but can it top artificially inseminating a cow, Wladimir?

• And Jockey International asked customers whether they'd rather see Tom Brady in his underwear or Tim Tebow in his. Brady got 57 percent of the vote even though he did undress Tebow on Saturday night. But what matters is that they would even ask that question. The Mayans are right. We'll never get through 2012. 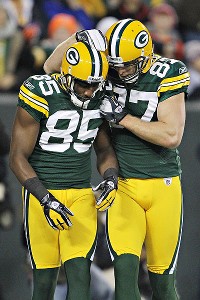 Ding ding. We are still around now, however, and that's the Brunch bell telling us it's time for some eclectic choices that are sure to satisfy. Read on:

• Will we see a fight between Manny Pacquiao and Floyd Mayweather Jr. this May or this year or this decade? George Diaz of the Orlando Sentinel says the answer is "never" because both have lost their Man Cards. Read the rant here.

• The Detroit Lions are out of the playoffs now but at least they had a taste of glory this year. Left behind is the decaying Silverdome in dying Pontiac, a town seemingly without a future. Jeff Bennett paints the sad picture for The Wall Street Journal. Read it here.

• Miami hardly is a dying community. Our friend Dan Le Batard tells us that no team, not even the flashy Heat, capture the heart of the city like the fast-changing Marlins. The question is: How long will it work? Find out what Dan thinks here.

• Baseball had a nice celebration when it welcomed Barry Larkin into its Hall of Fame. But Thomas Boswell of The Washington Post looks into the near future and sees seven of the best performers in the game's history that may never be allowed into the Hall. He searches for the least offensive answer to an offensive situation. Find his solution here.

• Finally, we look at a man who already owns an NBA team and wants to be the leader of his country. Robert Windrem of NBC News tells us that Mikhail Prokhorov is the most interesting man in the world. He tells us why here.

That's it. The Brunch is closed, although you probably have more playoff football in your near future. As always, enjoy.

Jerry Greene is a regular contributor to ESPN.com and can be reached at osogreene@aol.com.