When the Uni Watch college basketball season-preview column ran in November, the opening sentence was, "College basketball is under a cloud -- a gray cloud." That was a reference to all the schools that were rolling out gray uniforms this season.

Turns out that wasn't the half of it.

Nike has just unveiled its new series of Hyper Elite college hoops that we'll start seeing during the run-up to March Madness, and guess what they all have in common? Here, take a look.

As you can see in the background of that shot, Nike is calling this the Hyper Elite Platinum series, with "platinum" supposedly referring to the color of the uniforms. Can't blame 'em for trying to come up with a snazzy-sounding name, but come on -- they're gray. 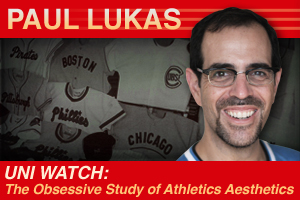 These uniforms are being rolled out for the nine Nike programs that have won national championships: Arizona, Baylor (women), Connecticut (men and women), Duke, Florida, Kentucky, North Carolina and Syracuse. In addition to the gray base color, the uniforms feature the following elements:

• The letters and numbers are reflective.

• As Nike has done in the past, the back of each jersey features a sublimated graphic -- in this case, an enlarged version of the school's logo. In the past, however, the graphic covered only the center area of the back of the jersey; now it will extend from shoulder to shoulder.

• Two other things you can see in that last photo: The player names are positioned below the uniform number, and the years of the school's past championships are shown in little stars above the number.

• The shoes and socks are rather electric.

Here are some slideshows displaying all nine designs from Wednesday morning's unveiling. (If some of the images look washed out, blame the reflective graphics, which are going to give photographers fits.) Take a look, and let us know what you think. Do you like the gray? Do you mind that all the schools are essentially being given the same design treatment? Will you run out and buy these jerseys? Speak up!

Paul Lukas has been trying really hard not to say, "Gray is the new black," but it seems unavoidable. If you liked this column, you'll probably like his daily Uni Watch website, plus you can follow him on Twitter and Facebook. Want to learn about his Uni Watch Membership Program, be added to his mailing list so you'll always know when a new column has been posted, or just ask him a question? Contact him here.