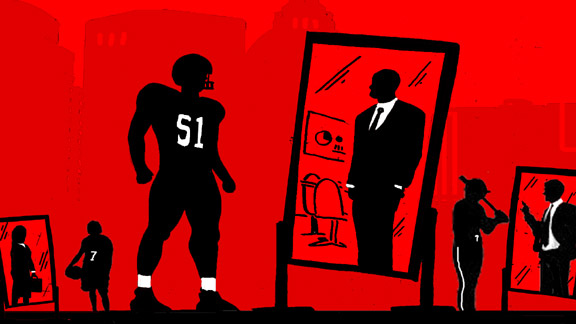 You know the stereotype: Since the beginning of secondary education, the "nerds" have looked condescendingly at the "jocks," knowing that eventually the athletes' inability to perform academically would allow the non-athletes to rise to the top of society.

The rivalry has provided comfort to nerds for ages.

Sure, he can pin a man twice his size in pankration, but can he configure and operate a watermill? I think not.

Oh, I'd rather spend my time on the cutting edge of the scientific method than wasting it on a horse with that mindless joosting pole, or whatever they call it. Jousting stick? How silly.

Like, seriously, he thinks he's so cool with his football jacket and pep rallies. In a few years I'll have gone to college, dropped out to my parents' disappointment and started my own business like that dude from "The Social Network." That'll show 'em.

… It's been a universal stereotype that athletes don't grasp their education the same way non-athletes do.

But that stereotype isn't accurate, according to a recent study conducted by Dr. Will Barratt and Dr. Mark Frederick at Indiana State University.

The four-year, 250,000-student study measured educational growth in students among all ages, races, genders, majors, backgrounds and school sizes. Instead of looking at GPAs and graduation rates -- which student-athletes perform worse in than non-athletes, according to a number of past studies -- Barratt and Frederick looked at seven intangible academic skills they believe are more indicative of future success in the real world.

They went into the study hoping to learn more about college kids in general, but they came away tilting their heads at the outliers jumping off the page: the "jocks," who developed more quickly and performed better than their non-athlete schoolmates in all seven areas by their final semester in school.

The study wasn't conducted by former athletes or the NCAA looking to score one for the meatheads, but rather by a couple of doctorate types from the Midwest with little to no interest in sports.

"I'm the faculty member who used to say athletics is a waste of time and it's stupid," Barratt said. "Once I looked at this data, I realized I was wrong. I still don't go to games, but I do understand the educational value behind athletics."

While student athletes enter college at a lower academic level than non-athletes, they progress at almost double the speed and contribute more in those intangible areas, the study says. Barratt and Frederick believe these skills will help them more than their GPA will beyond college.

"We're rather convinced that student athletes are far more ready to face the world than non-athletes," Frederick said. "That, we think, is incredibly good news."

Good news for the jocks, at least.

When most students go away for college, it's their first time away from the structure of their parents and teachers telling them where to be and what to do. Most high schoolers live by clear-cut rules and constant reminders of their deadlines and assignments.

In college, there's no one making them go to class. No one making them do their homework. No one staying on top of them. The most important adult in many 18-year-olds' college lives is the bouncer at the pub.

But college athletes, between their coaches, academic advisors and strict practice schedule, still maintain the structure that existed in high school.

"They have mandatory study sessions, academic support," says Dr. Michael Gillespie, a Duke philosophy professor. "They spend about 40 hours a week studying, which is twice a normal student."

Gillespie, who's studied sports in American ethical training, sees a number of reasons Barratt and Frederick came to their conclusions.

The book "The Game of Life," written by James L. Shulman and William G. Bowen, dissects the NCAA and de-emphasizes the importance of athletics in college. And even those guys admit that student-athletes make about $5,000 more per year than non-athletes.

Many believe that isn't a coincidence.

There are singular cases of these benefits all over the country.

'On our butts every day'

Former Duke star J.J. Redick earned ACC all-academic honors during his junior and senior years at Duke, but he entered school unconcerned with his grades or academic growth. Early in college, he struggled with juggling basketball, school and a social life -- and more often than not, school would rank third in his list of priorities.

"I wasn't as disciplined in basketball, in the classroom or off the court, and it showed," said Redick, a guard with the Orlando Magic.

But the system in place at Duke helped Redick get on the right path, he said.

There were mandatory study hours, teacher reports and a full-time academic advisor whose primary job was to make sure Duke basketball players made grades.

"He was on our butts every day to be in class," Redick said of his academic advisor. "He'd come to study hall, he knew all of our assignments. It's almost like we had an academic coach full-time. Most teams have that, and most schools have that, so that's a huge factor in helping student-athletes."

Suffice it to say, if you can't dribble or throw a ball, you aren't afforded a full-time academic coach.

And your mom not only lives far away, but she believes it when you say you woke up every Monday, Wednesday and Friday of the semester for that 6:30 a.m. astronomy class.

Not everyone is on board with the study's findings. Its methodology for quantifying such impalpable terms as self-awareness, critical thinking and leadership drew some skepticism.

"Let's proceed with caution here," said Dr. Randall Smith, a sociology professor at Rutgers. "These things are pretty abstract concepts they're trying to measure with a pen and pencil. That's OK, and I understand what they're trying to do. There's some stuff here. But I don't know that you can say anything definitive."

None of the professors contacted for this story doubted that athletes do indeed develop faster than regular students, but there are two caveats to that statement: One, student-athletes as a whole begin college at a lower level than the rest of the student population, a fact that Barratt and Frederick conceded. And two, student-athletes are given privileges other students aren't.

Students are afforded the same resources when it comes to tutoring and study-room options, but many non-athletes do not take advantage of them. And athletes on scholarship are given free passes at taking a class multiple times. Ordinary students can take a class twice, as well, but often only at an additional cost.

That decreases some of the school pressure on the student-athletes.

"I've taught so many student athletes, and most of them are good men and women who mean well," says Dr. Earl Smith, a Wake Forest sociology professor. "But at the end of the day, what's on their mind most is the games they play. It's a Saturday morning and they'll say they can't make a makeup test, and I can only do it at this time. But if the coach says meet me Saturday morning, they'll be there."

Barratt and Frederick went to the NCAA with the study, and said the NCAA was overjoyed about their findings. The NCAA is keeping quiet about the results for now, they said, but it may use them in the future.

The study isn't over -- they're still polling more students hoping to gather more information about athletics and some of the other conclusions they came to.

For instance, females are performing much better than males in college, and the difference is even bigger than athletes and non-athletes. And they found that any sort of extracurricular activity -- student government or Greek life, for instance -- helps students the same way that sports do.

The study hasn't changed how much Barratt and Frederick watch or play sports, which is almost never. You won't find them at a basketball game any time soon.

No, they're just a couple of nerds, doing research on the jocks, and finding that by the end of college, the two aren't so different.