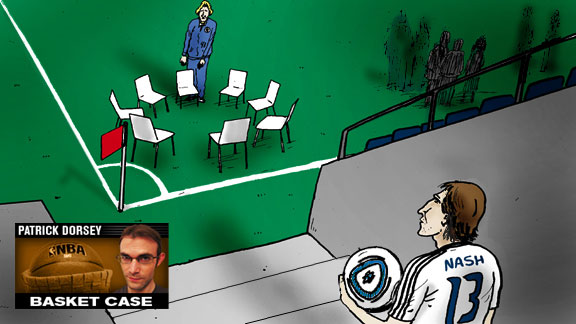 Kurt Snibbe/ESPN.comHe needs to leave Phoenix. So what if Steve Nash got a little help from his friends?

Time is running out -- on the trade deadline (it's Thursday) and on Steve Nash's career (he's 38). But Nash refuses to ask for a trade from the 18-21 Suns, with whom he's played for 10 years -- eight on this current run -- and won two MVP awards, made six All-Star teams (including this year's) and led Phoenix to three Western Conference finals. Some even think he might re-sign in the Valley, basically guaranteeing he'll retire ringless.

But what if someone tried to stop him? What if his friends and colleagues performed an intervention -- luring him unsuspectingly to, say, the home of his beloved Vancouver Whitecaps soccer team, then persuading him to learn how to quit the Suns?

STEVE NASH, dressed in soccer gear, runs through a dark tunnel, toward the stadium's entrance.

Nash: All right, who's ready to get nutmegged?

He stops. On the field are not soccer players but a circle of chairs, in them a series of famous faces such as KARL MALONE, JOHN STOCKTON, RAY BOURQUE, GARY PAYTON, ALLEN IVERSON, DAN MARINO, LEBRON JAMES, CHARLES BARKLEY and of course … 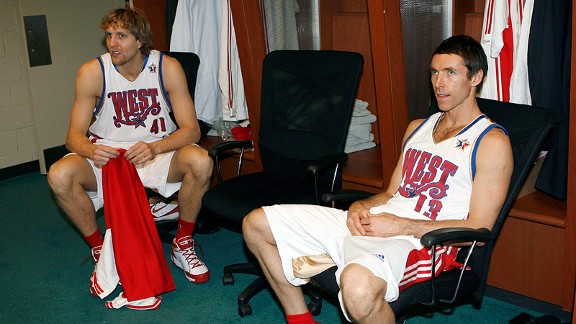 Barkley removes from his pocket a folded piece of notebook paper. His chair creaks as he shifts, but not as much as it used to.

Barkley (reading): Steve. We are concerned about you. You are a great player, one of the best point guards ever, yet you insist on remaining in Phoenix. You won't ask for a trade. I heard you might even re-sign with the Suns this summer, when you are a free agent. Don't do it, Steve. Don't toss your career out the window like I might've done that Milwaukee guy.

Nash: But I love it in Phoenix! My family is there, the University of Phoenix is there …

Barkley: I know. But you ain't gonna win a championship there.

Nowitzki: And Charles knows what it's like not to have one. I don't, but --

Malone: I didn't win a title, either, Steve. And now I have to buy Jazz tickets from a scalper. A scalper! Do you know the markup on those in Salt Lake City?

Bourque: And don't worry about chasing championships. When even your home fans want you to win, it's worth it.

Malone (to Payton): You won a title?

Nash (ignoring): Wait. But why should I leave? Isn't a great point guard is supposed to elevate his teammates?

Stockton: That's what I thought, but some of them still end up choking (subtly gestures toward Malone). 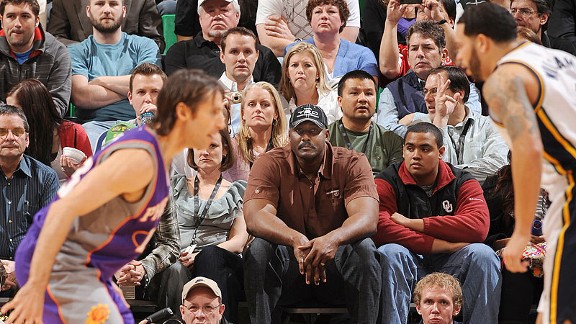 Andrew D. Bernstein/NBAE via Getty ImagesKarl Malone is watching -- even if he had to pay for those seats.

Nash sits back down.

Nash: All right, so maybe I won't win one. But is retiring without a title really that bad?

Iverson: Anyone have a 10 I can borrow?

Nowitzki: Here's the other thing, Steve: Everybody wants you. (Pulls iPhone from pocket.) Look at all these texts I got from people who couldn't come today. See? Here's one from Boris Diaw. (Reading) "Tell Steve to keep his disgusting healthy food away from Charlotte -- " OK, bad example. But, wait -- I'm getting a Skype from someone right now!

Nowitzki answers and tosses the phone to Nash. He looks at the screen. It's ISIAH THOMAS, flanked by an ASSISTANT.

Nash: You guys are kind of doing a Mike D'Antoni of a job here …

Then, BOOM! A soccer ball is booted from the stands, and thuds next to the circle. All look into the bleachers and see &#!33; 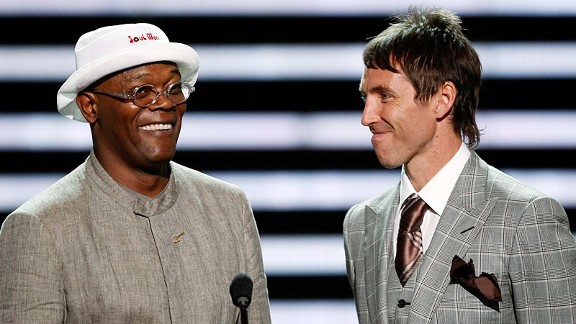 Kevin Winter/Getty Images"I will strike down upon thee with great vengeance and furious anger if you don't ask for a trade."

Malone: You're addicted to heroism.

Marino: You're straight hooked on "we."

Barkley: You need to think more about "me."

All: You need to get help.

Nash: Guys, I appreciate your concern. But I just can't make a decision now. (Stands.) I guess I have some serious thinking to do.

Everyone immediately turns to James.

All: Why didn't you say anything?! What's wrong with you?!

James (shrugging): I thought I'd let you guys take the last shot.

But then again, we were already aware he knows comedy.

IN PICTURES. AND WORDS.

"Two words, actually, and they're for your own good, Steve: You're fired."

Celtics: Danny Ainge trades Rajon Rondo, followed by an announcement that he will not trade Rajon Rondo.

Lakers: They either trade Pau Gasol, or they don't.

Trail Blazers and Suns: Portland asks Phoenix to lend Steve Nash to them for a bit, like one of those popular Oregonian bike-sharing programs. The Suns counter by offering Josh Childress and his contract for an actual bike.

Mavericks: Aiming to open up cap space for a run at Howard and Deron Williams, Dallas ships Shawn Marion out for an expiring contract and "fine considerations." David Stern vetoes this trade, and fines Dallas $100,000 for even thinking about it.

Patrick Dorsey is a Page 2 editor. He averaged 12 points per game as a second-grader in YMCA hoops; all other basketball court records have been sealed. He can be reached at bypatrickdorsey(at)gmail(dot)com and is also on Twitter (@DorseyPatrick).