By Josh Stewart | Special to Page 2 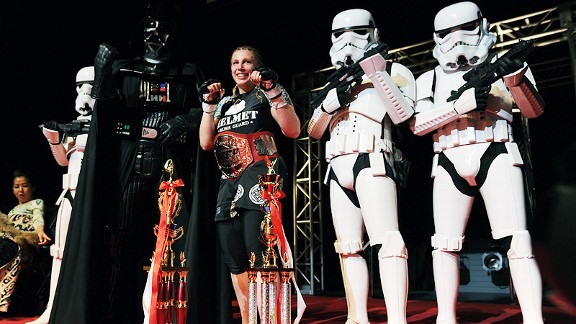 Etsuo Hara/Getty ImagesAmanda Lucas isn't using her father's success to propel her MMA career, but doesn't shy away from it.

At 8 months old, Amanda Lucas could climb out of her crib with ease. Why stick around there when there was dancing to do?

"I literally have home video of me, and you can see me bouncing to the music playing in the background," Lucas said.

Of course, she didn't know at the time that her adoptive father, George Lucas, created the "Star Wars" franchise. But her -- dare we say -- Jedi path was already set. The daughter of a man Forbes just estimated to be worth $3.2 billion wouldn't settle for a life without purpose.

Lucas, now 30, has traded climbing out of a crib for a career that often involves climbing into a cage.

In February, the hip-hop dance instructor-turned-MMA fighter won the DEEP open-weight title in Tokyo. Her win was celebrated by Darth Vader and his storm troopers, who awaited her on stage.

The trip overseas also included promotional appearances for a "Star Wars" re-release. During a recent chat with Lucas, her concern about being seen as a sideshow as opposed to a serious fighter was almost constant.

And yet, that apprehension was belied by a postfight photo showing her posing with the Empire's finest, title belt around her waist, seeming quite comfortable in the moment. After all, Lucas did enjoy bit parts in each of her dad's prequel flicks and grew up choreographing dance numbers for her and her friends.

"There's always been a kind of showmanship in me," she admits.

To that end, she didn't let lacking "a typical ballet body" keep her from a 10-year career teaching hip-hop to kids. (Lucas gives credit to her dad; his personal trainer found a cardio funk class at a local gym when she was 9 or 10, and an exception was made for her to go.)

She thanks her newest passion to, well, passion. Nearly 12 years ago she started dating Jason Hallikainen, who like many young adult males grew up on what he calls a steady diet of "Van Damme and Chuck Norris." At the time Lucas wouldn't even watch boxing, but the couple, now married, went to their first Muay Thai (a kind of Thai boxing) class in 2004. 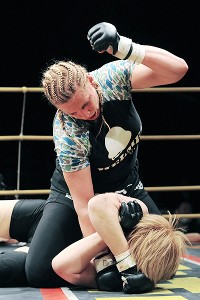 Hallikainen quickly realized his interest was limited to spectating, but Lucas was hooked, and eventually revealed her career change to her father.

"I think it kind of shocked him a little bit," Lucas said. "He's always been supportive of everything I wanted to do, and to follow my dreams."

That said, she's determined to make her own way. Lest anyone think she's doing this with unlimited funding, she mentioned how she structured her most recent overseas trip to limit expenses.

"People think, 'Oh, Amanda's got all these doors opened up for her, she's a millionaire and stuff.' It's not the case," Hallikainen said. "But Amanda's had to deal with this all her life, so she doesn't really have time to pay attention to what people have to say."

She's now 4-1 as a pro, and also made the final of last year's World Jiu-Jitsu Championship, losing to MMA staple Cris "Cyborg" Santos. Lucas admits she's not ready to face Cyborg under MMA rules (Cyborg is currently suspended for a positive steroid test, anyway). But Lucas is determined to get to that level.

"I don't know what it is about women fighting," Lucas said. "I don't know if it's like that girly instinct, or what, but there's some kind of crazy energy when girls fight. I don't really know how to put it."