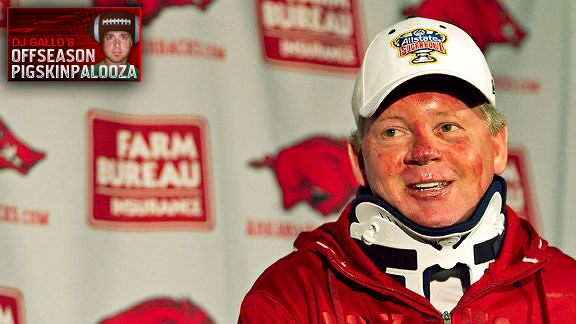 AP Photo/Gareth PattersonBobby Petrino's scandal doesn't have to end up being all bad for the embattled coach.

Bobby Petrino is having a rough week. His bike is wrecked, his face is cut up, his "inappropriate relationship" is exposed and now he might be out of a job.

But as anyone skilled in clichés knows -- and football coaches are cliché masters -- problems are just opportunities.

Petrino is at his low point right now, but soon he will be able to look back at this period and see it as the springboard that sent him to greater heights, like a daredevil motorcyclist leaping off a ramp through a ring of fire.

Here are just a few positives that can come out of this bad week for the Arkansas head coach.

The Bobby Petrino scandal is shocking not because he lied to his boss or because he had an inappropriate relationship with a woman half his age. That's not uncommon in high-profile college football. What's shocking is that Petrino has been disgraced before he wrote a book about being a great leader.

Usually if a coach is involved in a scandal, you can type his name into Amazon and find that he has authored a self-help book(s) full of tips on living with character. See Rick Pitino. Or Jim Tressel.

But Petrino has no self-aggrandizing memoir. This is a blessing. Instead of seeing book sales dry up due to scandal, he can now publish a redemption tale that shows the lessons he has learned in failure, allowing him to profit from his name being in the news.

"Pig Sooie and the Art of Motorcycle Maintenance: An Inquiry Into Values"

"Chicken Soup for the Soul, Vitamin E Ointment for the Facial Wounds"

Plenty of people will say that Bobby Petrino is a good football coach. Few will claim that he is a handsome man.

SEC fans wouldn't normally let a football coach get cosmetic work done without severe mocking, but with his face in its current road-rashed state, Petrino has an opportunity to improve his looks under the cover of healing injuries. Maybe this fall the SEC will have two coaches with the looks to pull off "blue steel" and a leather jacket. Pig hottie!

Quick: How many women's volleyball programs can you name? Penn State, UCLA, maybe USC, Stanford, possibly Nebraska or your alma mater if it has a team? That's not too many. Most schools either don't have teams or haven't accomplished enough to get noticed by casual sports fans.

But thanks to Bobby Petrino and his lady passenger, now everyone knows Arkansas has a women's volleyball team. Is it good? Eh. Last year the Razorbacks were 18-13 and 10-10 in conference. But those days of mediocrity and anonymity are at an end, because now they are one of the most well-known programs in the nation. That can only help recruiting.

Even if Petrino keeps his job, he's probably not going to get a statue built in his honor anytime soon. Alabama's Nick Saban statue cost approximately $50,000. That's money that Arkansas can use on other, more noble causes. Or, heck -- just go ahead and build Petrino a statue that depicts him riding on a motorcycle, like a great Southern general atop his horse. It would be the most unique statue in the SEC until South Carolina finally builds one honoring shirtless Steve Spurrier.

Now that all the details of the crash are out, there's no reason Petrino shouldn't make money off of it. The $31.99 these Bobby Petrino Motorcycle Club T-shirts are bringing in could be going into his pocket. Same with the Harley Davidson-inspired Petrino shirts. And the dozen or so other Petrino spoof shirts being made every minute. That money adds up. Before long, you have enough to buy a totally cool motorcycle helmet and sidecar.

Petrino, Ben Roethlisberger and Kellen Winslow need to join together and warn young football players about the dangers of riding motorcycles. Riding a motorcycle is a great risk to their physical health. That's what we're coming to discover that football is for. Riding motorcycles and playing football is just overdoing it.

DJ Gallo is the founder of SportsPickle.com. He has written a book and written for Comedy Central, The Onion and ESPN The Magazine. You can follow him on Twitter at @DJGalloESPN.