The golden age of baseball? It's not when you think.

By Bill Simmons | ESPN The Magazine

This column appears in the June 29 issue of ESPN The Magazine.

We're going with a one-question mailbag this week, courtesy of Phil D. from Montclair, N.J.: "What was the purest baseball era, from a statistical perspective?"

Honestly, Phil? That's like asking, "Who's the purest actress in an X-rated movie?" Every baseball era has been tainted to some degree. But if there is no era, maybe we can find a window. A four- or five-year stretch will do. Two years, even. Hell, I'll settle for an All-Star break. Okay, let's begin.

I'm dismissing the following eras for being either impure, antiquated or uniquely ludicrous:

The 1800s: Please. They wouldn't even let those guys play in Ray Kinsella's cornfield.

1900-1919: Pitchers threw 300 to 400 innings a season. Some outfields didn't have fences. They used the same ball over and over; by the seventh inning, it looked like Mickey Rourke's face. Teams hit a home run every five or six games. Fielders left their gloves on the field between innings. Minorities couldn't play. Come on. 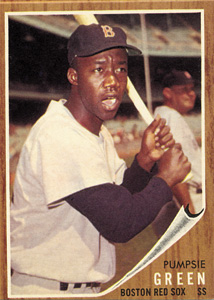 Courtesy ToppsThe Red Sox weren't integrated until 1959, with the arrival of Pumpsie Green.

1920-1946: Once Babe Ruth ushered in the long ball era, teams averaged five-plus runs a game, and ERAs soared to Chien-Ming Wangesque heights. Also, the concept of the bullpen hadn't been thought through. And WWII hijacked so many players that the 1945 Browns started a one-armed outfielder, leading to 45,000 "old Pete Gray is just lending them a hand" jokes that summer. Minorities were still banned. No thanks.

1947-1959: Jackie Robinson finally integrated baseball … but it didn't exactly become the U.N. Most teams had one or two minority players, tops. The Red Sox didn't start their first black guy until 1959 -- and his name was Pumpsie. Still not buying it.

1969-1976: The sport began to assume its current form -- all kinds of ethnicities and offensive players (speed guys, power guys, you name it); the dawn of semimodern closers, like Rollie Fingers; teams, like the Big Red Machine, that valued OBP as much as power and speed; even a first taste of overpaid stars mailing in seasons with Bobby Bonds and Richie (a.k.a. Dick) Allen.

But I have issues with this time, too. Managers foolishly affected games with too much hit-and-run and too many reckless steals. Leadoff hitters were chosen for speed, not an ability to get on base. There was still no real bullpen specialization, and the power numbers weren't quite there either. Starters threw too many innings (poor Catfish Hunter's arm). Closers were routinely burned out by pitching 125 to 150 innings. Too many artificial turf stadiums rewarded double/triple guys and slap hitters and wore down everyday players. This is not a polished enough era for my taste -- although the Afros and sideburns were sublime.

1977-1987: All those manager/park/bullpen/style issues from the previous era were still in play (although to a lesser extent), but you could have convinced me about this span if not for a cocaine craze that affected Hollywood, music, arts, sports and any other industry in which people had disposable cash and nostrils. I'd say we were operating at 74% capacity of creative/athletic excellence then. I mean, it took nine years for guys to realize that maybe freebasing right before a doubleheader wasn't the best idea. You shouldn't have to rob that many convenience stores for coke money before you know you need to cut back a little.

How many careers were affected or compromised? And how do we know there weren't PEDs back then? Bodybuilders, Eastern European Olympians and even some NFL players were 'roiding as far back as the late '60s. Some of our favorite action heroes were using PEDs by the early '80s (most famously, Sly and Arnold). Even professional wrestling (I know, I know, it's hard to believe) was compromised. Are we so sure this crap didn't needle its way into baseball sooner than the Canseco era?

In the American League, homers jumped from 0.58 to 0.89 per game (per team) in 1977 and topped 1.0 in '86 and '87. And it's not like a few weird things didn't happen. For instance, Darrell Evans topped 20 homers just once from 1976 to 1984; then, at age 38, he belted 40. Is that less strange than Brady Anderson's famous 50? And let us not forget that when offense jumped so dramatically in '87 we all came to the same conclusion: "The ball is juiced." How else could Wade Boggs hit 24 homers? Why else would the AL's OPS reach a postwar/pre-PEDs peak of .759? Did they juice balls to distract everyone from an ugly winter of owner collusion? I say yes, absolutely. Just a little too much weirdness in this era for my liking.

That leaves a five-year period, 1988-1992, that now seems Jonas-level pure, after the fact. Cocaine had become passé, and the number of suspicious statistical guys -- we could create the word "'roidy" here, just for kicks -- was a handful, at best. Er, worst. They clearly didn't damage the game any more than the spitballers, scuffers and corked-bat guys of earlier eras. 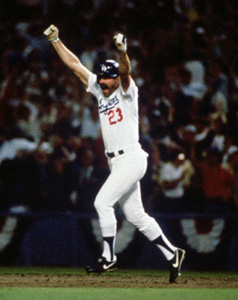 Will Hart/Getty ImagesA one-legged Kirk Gibson defines what could be baseball's purest era.

Combined, both leagues averaged a .702 OPS, a 3.79 ERA and 4.19 runs per game. There had been only 15 36-plus home run performances in the five seasons prior to 1993; by 1999, I think everyone in the majors had at least 36, except Luis Sojo. Quality starters threw between 220 and 260 innings, only 24 pitchers won 20-plus games, and Dennis Eckersley and Bobby Thigpen ushered in the reign of one-inning closers. Maybe recklessness on the basepaths hadn't slowed, and maybe every team hadn't fully embraced OPS and defense. But everything else was in place.

It certainly was an unpredictable group of seasons. In a good way. The 1988 Dodgers were the worst on-paper champs of my lifetime: Basically, they won with Orel Hershiser, a one-legged Kirk Gibson and a couple of decent pitchers named Tim. It remains amazing. The scrappy 1990 Reds shocked Canseco and the heavily favored A's. The 1991 World Series ranks among the best ever, Kirby Puckett and Jack Morris willing the Twins to a crown.

And the '92 playoffs feature one of my favorite rewatchable baseball moments: Atlanta's Francisco Cabrera slapping a do-or-die single into left field in the climactic NLCS game, Sid Bream chugging around third like an 18-wheeler, Pirate Barry Bonds whipping a slightly off-the-mark throw home, pudgy Mike LaValliere blocking the plate and almost making the tag and CBS' Sean McDonough yelping, "Saaaaaafe!" It's fantastic. It's the best. I would argue it's the last great, completely untainted I-can't-come-up-with-a-single-way-to-denigrate-this baseball moment. That it includes a spindly, normal-headed Bonds almost seems fitting.

So that's my answer, Phil: 1988-1992. And for even more symbolism than Bonds' head, remember this: Game 3 of the 1989 World Series was postponed by a frightening earthquake just after batting practice. One of the Bay Area's deadliest quakes in years interrupting the only Bay Area World Series ever? The odds are unfathomable. On the other hand, can you think of a more logical time for a natural disaster to hit than the purest era in baseball history? I rest my case.