By Harry Glinberg of Harry C. Glinberg Jewlers in Wauwatosa, Wis. (as told to Alyson McNutt English) | ESPN The Magazine 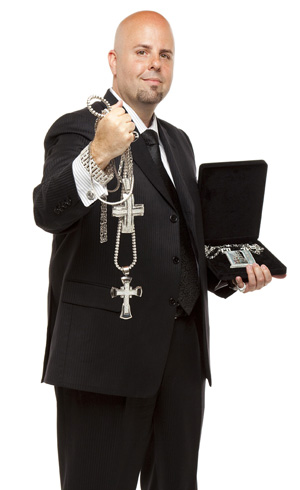 Kevin J. MiyazakiHarry wears a suit by Jack Victor and a tie by Jones New York

This article appears in the July 27 issue of ESPN The Magazine.

1. IF YOU CAN THINK IT, WE CAN MAKE IT.
"We customize a lot of pieces. Deron Williams liked a diamond- encrusted Cartier watch he saw somewhere, so I bought a plain one and did the diamond work myself. It saved him tens of thousands. Marquis Daniels had the most unusual request: He wanted a necklace that looked like an Orlando Interstate 4 sign. It's 120 carats of diamonds on three massive chains. That got me a lot of business."

2. WE TAKE ROAD TRIPS TOO.
"I used to travel more, but it gets dangerous when you have millions of dollars in jewelry in your bag. Still, I get out occasionally. Some Cavs are customers, so I went to Orlando during the conference finals. Mo Williams and Daniel Gibson bought stuff, but LeBron didn't. He said, 'It's a recession!' I was like, 'You're LeBron!' "

3. DIFFERENT SPORTS, DIFFERENT STROKES.
"NBA players go for the flashiest pieces. Not more expensive or better quality necessarily, just flashier. In football, receivers and safeties like loud items. Baseball players are more conservative. I don't work with NHL guys, but I'd love to. I could make diamond teeth."

4. SHINES CHANGE.
"Athletes used to like blingy watches that were low quality, but now that's shifting. A lot of ideas come from rap lyrics. One song talks about 'diamonds on my G-Shock.' That's an inexpensive, digital plastic watch, but I've been modifying and selling a lot of them. Beyoncé's song 'Upgrade U' name-drops Audemars Piguet, an upscale brand. I make sure to mention it to clients."

5. THERE'S A LOT OF SELF-SPOILING.
"Most guys spend more on themselves than they do on their women. But there are exceptions. Portland's Joel Przybilla is always buying things for his wife. He just picked out an anniversary ring that's 10 times nicer than most NBA wives' engagement rings."

6. EVERYTHING CAN BE IMPROVED.
"I've 'remixed' pieces. The All-Star ring Amar'e Stoudemire got was horrible, so I took the design and made a new one from scratch, with fancier diamonds and inlaid enamel. Charlie Villanueva saw it and had me do the same thing with his NCAA championship ring. They get the old one back, though. It's like a trophy. They don't want to lose that."