By Andrew Astleford | Special to Page 2 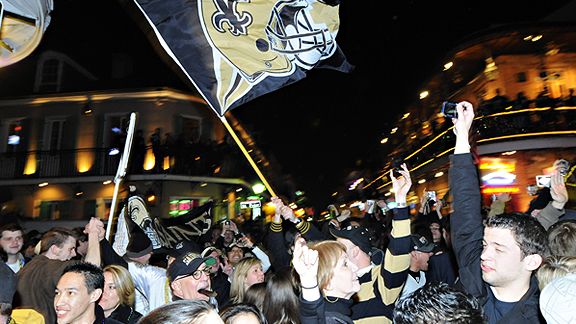 NEW ORLEANS -- When 43 years of frustration disappeared into the thick Bourbon Street breeze, the greatest party in the world raged. The New Orleans Saints -- yes, those Saints of paper bag and public infamy of old -- will leave south Florida a Super Bowl champion for the first time in their history.

What awaits them during a Super Bowl parade on Tuesday through these streets will surely rival the jubilation that exploded from the French Quarter on Sunday.

"This is so awesome," Saints fan Darlene Milliet said as she hugged her sister, Cindy Lasiter, both of them crying in the French Quarter. "I can't believe it!"

Late in the fourth quarter, Tracy Porter slipped in front of a Peyton Manning pass, picked it off and bolted 74 yards for a touchdown. The hearts dropped in Indianapolis.

On New Orleans' Iberville Street, in Chateau Bourbon's Clock Bar, men kissed women. Beers were raised. Around the corner, on Bourbon Street, policemen on horseback high-fived joyous faces below. A young man raced through an intersection with his cell phone.

THE AGONY OF DEFEAT

Page 2 was also on the scene in Indy, where confidence became sorrow in a matter of hours for Colts fans. Story

Later, confetti was poured from a Bourbon Street balcony. Fireworks exploded. Inside a pizza-by-the-slice shop, patrons packed around the television and chanted the Saints' rallying cry: "Who dat! Who dat! Who dat say dey gonna beat dem Saints!"

The greatest party in the world raged. (Sorry, Miami.) And life here, for one magical day, was good.

Trina Pearley-Brown was raised by her mother to be a Saints fan, and she was carrying on the legacy.

"You can't describe it. It's so awesome. We've been waiting for this for years," said the 47-year-old from Gramercy, La. "It means so much to the city. They're back. They're alive."

After a tense first half, the release was well-received. At the Old Absinthe House on Bourbon Street, Mark Vice grew worried by the Indianapolis Colts' offensive precision in the first quarter. He has lived in New Orleans for 33 years, and as a season-ticket holder, watched the Saints lose two games at the Superdome this season. To him, the Saints trailing at halftime was nothing new … but it was still agonizing.

"I don't like this," he said to a man nearby, both smashed in the back of the bar near a jukebox. "They're just methodically moving the ball."

It was a night that will be remembered for ages here. Moments before kickoff, Bourbon Street came alive. "Who dat" chants lifted through a thick fragrance of alcohol. Partiers scrambled for four-row-deep standing-room-only bars. Empty plastic cups revealed themselves on sticky sidewalks. Everyone wanted to witness each second of history.

The revelry started early. Early Sunday morning, 45 middled-age women gathered on a parched field at the end of Louisiana Avenue and prepared to parade eight rows deep to Camp Street. Some wore feathered black-and-gold hats. A pregnant member showcased a black fleur-de-lis stretched across her stomach.

The C.T. Lady Steppers greeted the biggest day in New Orleans Saints history the most appropriate way they knew how: by starting a second line. Like many in this recovering city, the dancers celebrated renewal made real by a football team that means so much more to many here. During this day of celebration, they shared black-and-gold enthusiasm. They shared joy.

"There's a spirit of Carnival to everything we do in New Orleans, so I think that has been attributed to the Saints also," said Cynthia Garza, the majorette of the group. "The coming together of Carnival season and the Saints is a little bit too much to handle. My daughter can't sleep, and my heart has been beating out of my chest all week. We sort of felt like we've already won."

A little after noon, beyond Louisiana Avenue, a crowd gathered on St. Charles Avenue around a 10-piece brass band that was playing between the streetcar tracks. The first of two Uptown Mardi Gras parades had ended, but an impromptu performance remained. For 13 minutes, about 15 people -- many wearing black Saints T-shirts and jerseys -- clutched plastic cups and jived.

The display was uniquely New Orleans. Above the revelers, strands of beads dangled from moss-swathed branches. A black patch over the tuba read, "Who dat." Later, a black Ford truck with two Saints flags drove by and blared its horn.

"The Saints are a big part of this city," said Jeoffrey Guillot, the band's tuba player, moments after someone offered him a beer. "It honestly means everything."

Early afternoon turned to evening, and final Super Bowl party preparations began. In the Lower Ninth Ward, Super Bowl Sunday held special meaning for Ward McClendon. He helped organize an event at the Lower Ninth Village for people without a television. He planned to provide a wall-sized screen with surround sound and soul-food concessions. He wanted to do his part.

To him, the Saints have given ravaged residents hope. For many, he said, there remains a hole in lives in this area, where more than 75 percent of the pre-Hurricane Katrina population remains displaced. Here, he said, football has helped those who returned to heal.

Especially after a Super Bowl victory.

"It's doing a lot for our spirit," McClendon said.