There are plenty of guys in the NFL who are roughly 6-foot-6 and 300 pounds. But it was the fact that John Welbourn had 8 percent body fat that made the New England Patriots' locker room take notice.

"When I was in New England [during the '08 preseason] a bunch of the guys saw the way I ate and asked a lot of questions. So I ended up writing out some diet stuff for them," Welbourn said. "They were pretty interested."

As they should be.

Welbourn, a 10-year NFL veteran, had just introduced them to the Paleo Diet, more popularly referred to as the "Caveman Diet." But don't let the catchy name fool you -- there's plenty of science behind it. 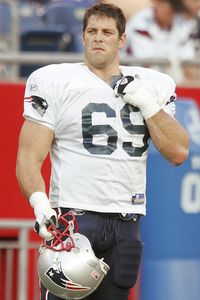 Loren Cordain has been studying evolutionary nutrition for two decades. He is a professor at Colorado State University and the author of two books on the subject. The idea is that for 99.6 percent of our evolutionary history (2.6 million to 10,000 years ago) we ate virtually the same things and therefore our genome is perfectly adapted to those foods: lean meats, seafood, vegetables, fruits and nuts.

"We've uncovered the diet that humanity evolved with [during the Paleolithic era]," Cordain said. "And that's why it does work because it's consistent with our genes."

The Paleo Diet does not include cereal grains, legumes, dairy, vegetable oils, salt, alcohol or refined sugars. Processed foods are the No. 1 enemy. Followers say if it's got more than one ingredient, it's not in the Paleo Diet. There just haven't been enough generations since the agricultural revolution for our bodies to adapt to the dramatic changes to the human diet.

Welbourn was figuring that out on his own long before he met Cordain.

"I sort of naturally found the diet in that I knew a lot of grains and white sugars and processed foods made me feel sick. I never really cared to eat them," Welbourn said. "I didn't really know a name for what the diet was until about three years ago. It instantly made sense to me since I'd always gravitated that way."

But not everyone who encountered the diet took to it immediately.

In fact, even after Cordain published "The Paleo Diet" in 2002, he had trouble convincing some of his closest friends that it would work for everyone.

One of those people was Joe Friel, who holds a master's degree in exercise science and is a USA Triathlon and USA Cycling certified elite-level coach. He is also a founder and past Chairman of the USA Triathlon National Coaching Commission.

"Essentially I argued [with Cordain] that it wouldn't work for athletes. One day he said to me why don't you try it and see if it works for you or doesn't work for you," Friel said. "So I took the challenge, and for one month ate his recommendations and after about three weeks, I began to realize that I was feeling better and training better than I had in a long time."

With that success, Cordain had found his co-author for a second book, "The Paleo Diet for Athletes," which they published in 2005. But the concept just wasn't ready to catch on.

Five years after it was first published, "The Paleo Diet for Athletes" is currently No. 2 on Amazon.com for sports training and sports coaching books. Cordain says most diet books fade in popularity, but this one won't go away. He doesn't know exactly how many people follow the diet, but estimates it to be in the millions.

"I think the biggest reason the book is selling is because it's kind of the time for it," Welbourn said. "People are starting to realize that the way we've been told to eat for the past 40 or 60 years is just plain wrong."

Welbourn said he believes so strongly in the diet that he has founded his own company, Paleo Brands, with Cordain serving as an adviser. Welbourn says the venture grew out of his personal needs. He travels a lot for training and speaking engagements and was having a difficult time finding the necessary foods on the road.

"You wouldn't think finding meat, fruit and veggies would be hard, but it's damn hard in a lot of places, especially airports," Welbourn said. "The biggest complaint about the Paleo Diet is 'Yeah, we know we should eat like this, but it's not convenient for me.' America is based on convenience and we're just trying to make the Paleo Diet more accessible."

Welbourn isn't sure how many of his old Patriots teammates have stuck with the Paleo Diet since he introduced them to it two years ago, but he says he's always trying to pass along what he's learned.

He's constantly going back and forth with Atlanta Falcons tight end Tony Gonzalez, a longtime friend and nutrition fanatic. Gonzalez swears by pasta, whole wheat and other carbs. Welbourn keeps sending him research on the Paleo Diet and hopes to one day convert him.

"Do enough guys eat like this in the football community? I don't know. I still remember on Fridays after practice coming out and seeing huge pizzas," Welbourn said. "I think it'll take a little longer to catch on [in the NFL]. But the sooner people adopt the diet, the sooner they'll see the benefits."