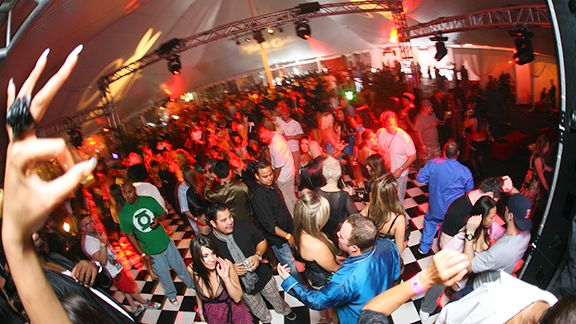 Nicole Chan for ESPN.comIt's party time at the Playboy Mansion for some NFL stars.

It's not every day you interview athletes wearing your bathrobe. But this is what happens in the fantasy world of Playboy impresario Hugh Hefner. And that's just what I was doing at the Playboy Golf Scramble's week-ending bash at the Playboy Mansion, where the pajama-only dress code was strictly enforced.

Each year some of the NFL's heaviest hitters tee off under the California sun and mingle with current and former Playmates at the Industry Hills Golf Club at Pacific Palms Resort in Industry Hills, Calif., 10 miles east of Los Angeles, before heading over to Hef's for an unforgettable night.

"This is the greatest," Dallas Cowboys wide receiver Miles Austin said. "You've got girls, golf and sun. What more can you ask for?"

The week is about all of those things, but it feels like one big excuse to throw a great party.

Soon after arriving at the Mansion by shuttle, I run into Ravens linebacker Terrell Suggs, who was decked out in plaid pajama bottoms, slippers and an XXL robe of his own. (About now I start to feel a bit less ridiculous about doing interviews in the pajama bottoms I got two Christmases ago.)

But what stood out the most about Suggs was the bling around his neck. Dangling from a silver chain was a diamond studded platinum and gold Star of David.

"I'm half Jewish, half Christian," Suggs said. "I'm a Jew for Jesus." Not sure where T-Sizzle was coming from, but nice to see he's an equal opportunity worshipper.

Two more shuttles pull up and 80 young women pour out wearing unmentionables every color of the rainbow and draw gasps from the onlookers which included Austin, his Cowboys teammate Ken Hamlin and Houston Texans tackle Ephraim Salaam.

"Only at Playboy," Hamlin said. "Where else can you see something like this?"

But the girls were actually a bit overdressed compared to their body-paint-wearing counterparts inside the party.

After the swarm of lovelies passes, I make my way inside and see a certain member of the cast of "Entourage" who wants neither to be recognized nor quoted. "Not tonight man, not here," he says. "You can respect that."

Respect that we do and move on.

I scout the grounds and see Browns kick return ace Josh Cribbs by the buffet eyeing the shrimp and risotto in between taking pictures with adoring fans.

From there it was over to the dance floor in a permanent, large white party tent on the back lawn of the property next to the grotto, where "The Office" star Craig Robinson, who was rocking a yellow pair of Reebok Zigs, was cutting a nice little rug. After a quick conversation with Robinson he tells me that his new movie "Hot Tub Time Machine," which came out the day before, grossed $12 million. Nice, man. (It actually pulled in $13.7 million, good for the third-best haul of the weekend.)

Next, I spot actor Omar Benson Miller, who is probably best known for "American Pie Presents: Band Camp" but is a regular on "CSI: Miami." On Saturday night he was best known as the guy who everybody thought was the actor who played the role of Michael Oher in "The Blind Side." (He wasn't.) The kid was a good sport about it, and thanks to that little Sandra Bullock vehicle, he's never been more popular. 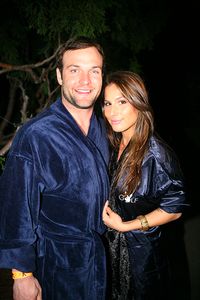 Here are some more quick hits from what went on at Hef's House:

Two years ago, "Girls Next Door" star Kendra Wilkinson met Eagles wideout Hank Baskett at this very event. Soon after, they were married, had a baby and signed a reality show deal.

So, obvious question: What are the chances of meeting your future wife at the Playboy Mansion?

"There's no likelihood of that for me because I already met her," Suggs said. "Not married yet but the window is closed for me."

"I'm not holding out too much hope for meeting a wife," Hamlin said. "I'm just going to live in the moment."

"It could happen but that's not what we come here for," Salaam said. "I'm sorry you're just not going to meet your missus here. My advice is to have a good time and don't worry about finding that special person here."

Best Nickname of the Night:

"That's my alter ego," Suggs said. "I'm a superhero that knows how to have a good time. I'll get behind the DJ booth and get on the ones and twos and get the party going. I came here to show people how it's done."

This One Time, In High School …

With so many athletes roaming the grounds just about everybody was recalling their own athletic glory days. The way adult film star Ron Jeremy tells it, he was a regular Bruce Jenner while attending Cardozo High in Queens in the '70s. (Pop quiz: Current Cardozo alum in the NBA? We were looking for Rafer Alston.)

"I'm from New York so we're tough," he said. "In high school I played soccer with CIA director George Tenet and ran track too. I was pretty fast. I still am."

He says he competed in the 50- and 100-yard dashes. Boy, what a ripping good yarn. Jeremy also claims this is his 129th trip to the Mansion. Actually, that I believe.

He says he was also really into kung fu growing up. "It's all about discipline, breathing and chi," he explained.

To prove he's still pretty good he urged me to search "Ron Jeremy and Chuck Liddell" on YouTube. Spoiler alert: It's a boring, raunchy Internet commercial in which he fights the MMA legend. Jeremy considers it the height of his athletic accomplishments.

"It was a tough fight but I held my own," he said proudly. "But seriously, it was staged."

Thanks. Wasn't sure I could have guessed that.

Best Golfer of the Week

"He's crazy good," said Hamlin, one of five Cowboys at the event. "He's got a good putting game and he's just really serious about playing. That's how he raises money for his charity."

And the winner of this year's Andrew Bynum Award is … nobody. A little history: Last year the 22-year-old Lakers center showed up to the Mansion while nursing a torn medial collateral ligament in his right knee while the Lakers were on an East Coast road trip. Bynum became the talk of the party when he hoisted former Playmate Nicole Narain, best known for once dating Colin Farrell, onto his shoulders and pranced around on the checkered dance floor.

Saints defensive tackle Remi Ayodele predicted he'd be the guy to fill Bynum's big shoes, but alas fell short despite the many takers. ("I'm 5-9, so someone would have to be a really big boy to lift me," said Miss January 2010, Jaime Edmondson, a former police officer who holds a degree in criminal justice from Florida Atlantic University.)

The Mohawk-wearing Ayodele did, however, show surprising potential as an amateur MC when he grabbed the mike and began narrating the party with various shout-outs and rap lyrics he kind of knew.

Despite the night's raucous vibe, he said the party energy paled in comparison to the parade held in downtown New Orleans after the Saints won the Super Bowl. "That was the best moment of my life," Ayodele said. "With what it meant to the city it was a moment that can never be duplicated."

Jenny's Got A Crush

"I loved meeting him. He was so amazing to me. He's very charming and very sweet and has beautiful eyes and draws you in right away. I didn't know who he was when I met him but when I found out he was on the Cowboys I was doubly excited because I've been a Cowboys fan since I was 13 years old. I'm always checking the scores on my phone so it was super huge for me."

With the mix of girls, NFL players and an anything-goes-vibe in a legendary party atmosphere, the subject of the woes of Steelers quarterback Ben Roethlisberger was not far from the minds of many players. It just wasn't on their tongues. There seemed to be an unspoken code of silence players followed and most were reluctant to comment on Big Ben's legal troubles.

"I don't know the particulars of his situation but hopefully he can get through it," said Hamlin. "He's one of the faces of the league so it's a tough situation for everyone."

Despite the endless flow of Patron and the player-friendly environment, most players approached the night cautiously. Many felt the best way to stay away from unwanted trouble when they ventured out was to bring a trusted friend to watch the people watching them. A few even had style-cramping agents in tow to look out for their well-being.

"But we're adults and we're ultimately responsible for our own actions," says Hamlin. "We're at the Mansion to have fun, so you just want to enjoy it and get out of here safe."

Suggs' Ravens teammate Oher was the subject of the Oscar-nominated movie "The Blind Side." So what if they made a movie about Suggs' life? "It would be called 'Against All Odds' and I'd be played by Henry Williams [best known for playing detective Baldwin Jones on 'NYPD Blue']," Suggs said. "My mom would be played by Vivica Fox. Now that would be a heck of a movie."

In one of the most awkward juxtapositions in human history, a Bat Mitzvah was being held at the same hotel in which guests had to check in for the Playboy party. It was difficult to tell whether or not the yarmulkes outnumbered the bikini bottoms, but both factions seemed to coexist well when passing each other in the lobby.

Chris Palmer is a contributing writer for ESPN The Magazine.