Denver's own Field of Dreams 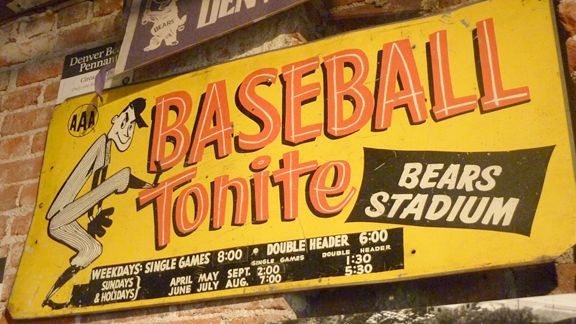 DENVER -- Nearly 20 years after helping bring Major League Baseball to the Mile High City, Bruce Hellerstein finally has his own field of dreams.

Though players won't emerge from any cornfields, America's favorite pastime comes to life a block from Coors Field inside B's Ballpark Museum, which houses a treasure trove that Smithsonian Baseball ranked among the top 21 private collections in the world.

The museum at 1940 Blake Street, which opened to the public earlier this summer, has the prerequisite autographed bats, balls, programs, photos and game-worn jerseys, not to mention bricks and mortar from various stadiums.

There's a giant "U" from the main entrance of the original House That Ruth Built hanging in one corner, along with a metal drain cover that rookie sensation Mickey Mantle presumably caught his cleats in while chasing a fly ball during the '51 World Series. 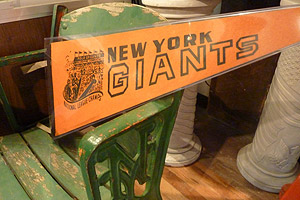 Courtesy of Lynn DeBruinHere is a splintered, peeling end seat from the Polo Grounds, home of the New York Giants before they moved west.

Top and center in another room is the rare baseball globe that glowed from a chandelier once hung inside the grand rotunda at Ebbets Field, home of the Brooklyn Dodgers.

There are turnstiles and splintered end seats from 14 classic ballparks, complete with wrought-iron carvings of logos like the Tigers and Reds and even the old Giants before they moved West.

All in all, there are more than 1,000 items -- ranging from a mint condition ticket of the last game ever played at the original Yankee Stadium on Sept. 30, 1973, to the huge rolled piece of metal that marked one entrance to Tigers Stadium off Kaline Drive.

Just a year ago, everything was stuffed into Hellerstein's 1,000-square-foot basement.

"When I was 6 or 7, I just fell in love with the game," said the 61-year-old CPA who served on the commission that brought the expansion Colorado Rockies to town in the early '90s. "I can't remember a day in my life where baseball hasn't been involved."

Hellerstein, a third-generation Denverite, says the museum is a lifetime of work. He acquired many of the items from auctions. Other pieces are consigned.

Eventually he plans to write a book called "The Thrill of the Hunt". 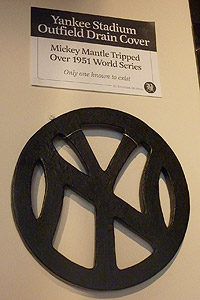 Courtesy of Lynn DeBruin The original Yankees Stadium had pipe drain covers in the outfield grass. In the 1951 Series, Mickey Mantle got his cleats caught in one, tearing up his knee.

For now, he is thrilled that people other than family and friends will get to see what's been hiding in his basement all those years.

Just don't ask him to pick a favorite item -- among them are the beloved Denver Bears memorabilia, the bronze bat light fixture that hung above a ticket window at Ebbets Field or the 3-foot-tall section of padded wooden fence that separated fans from the action in right field at the old Yankees Stadium.

Wife Lynn Hellerstein admits she wondered where all this was headed.

"At first I thought it was craziness," she said. "Where's the line between passion and craziness? But it's truly a love and it's not just baseball. The passion is about the life. People will come in and say, 'I remember my grandfather [telling me] … ' It just triggers emotions with people."