By Shane Mettlen | Special to Page 2 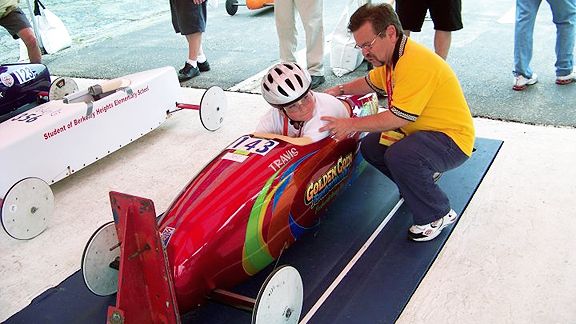 Who knew that when Corbin Bernsen played a Cleveland Indian in the 1989 baseball classic "Major League" that his ties with northeastern Ohio would be so strong that he'd be trying to save a regional gem more than 20 years later?

Bernsen is in Akron this week, producing the soap box derby film "25 Hill" -- the proceeds of which will go to the All-American Soap Box Derby -- in which kids ride in boxes on wheels down a steep hill -- an Akron tradition since 1935. And one that Bernsen remembers fondly enough that he wants to save it.

He's not the only one.

The Derby, which will be run on Saturday, has all the makings of being yet another devastating sporting situation for Ohioans. Still reeling from the loss of LeBron James, northeastern Ohio has suffered more than its share of sports disappointments, including the Browns move to Baltimore in 1996 and the team's overtime loss to Denver in the 1986 AFC Championship -- the closest the team had come to getting to the Super Bowl since the 1960s.

But because the Derby is a community event, losing it might do more Akron's psyche than losing the King or a shot at the Super Bowl

King James is dead to them. Long live the Derby.

The Derby has lost key sponsors, including Chevrolet and Levi Strauss Co. over the years and in 2009, FirstMerit Bank demanded payment on more than $600,000 in loans. 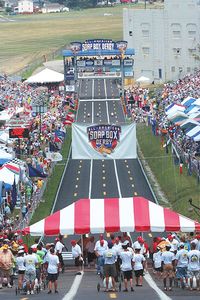 But a new board is making some tough financial decisions to keep the Derby alive -- and in Akron.

''We are committed to making sure that the Derby survives,'' Bill Evans, the board president, told the Akron Beacon Journal. "The Derby is so inexorably linked with Akron's brand.''

And even competitors from the city with potential to take the Derby away believe it should stay in Akron. The town of Culpeper, Va., is constructing a permanent race facility that will rival Akron's Derby Downs with a large grandstand, concessions and garage and pit areas.

Culpeper and neighboring Fredericksburg have hosted the world's largest local derbies -- attracting about 150 racers a year -- for the last five years. And though Culpeper is hoping to attract races annually with the new facility, Ohioans can rest easier because unlike when Baltimore nabbed the Browns or Miami wooed LeBron, up-and-coming soap box cities aren't trying to steal the event.

"We need to do everything we can do to make sure Derby Downs is the home of the world championship," said Frankie Gilmore, who founded the Culpeper Derby with her brother, Tony Troilo. "That is the Mecca of the All-American."

Since the new board was organized, Derby lovers -- Bernsen included -- have stepped up. A reorganized All-American Soap Box Derby board began creating a new financial plan to save the event, which brings in about $3 million to the Akron area. But despite cost-cutting and fund-raising, the Derby won't be out of the financial woods until it lands a new national sponsor.

"The economy has been bad and that makes it tough to land major sponsors," said Paul Bates, a member of the Derby's National Control Board and a resident of Culpeper. "Corbin Bernsen is making this movie and that's going to help the Derby. Getting the sponsors takes time, but they are getting there."