By Patrick Hruby | Special to Page 2 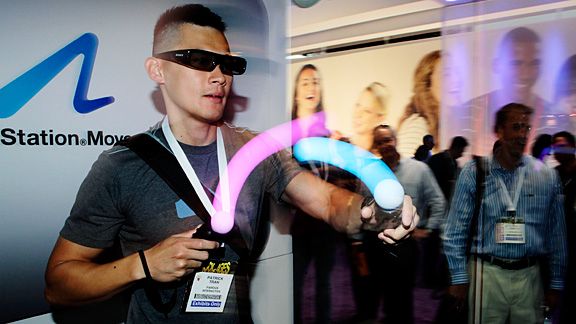 1. Sony has out-Wiied the Nintendo Wii;

2. For sports games, that's probably a good thing. But not always.

On the Wii, games know the direction you tilt the controller and how fast you swing it -- which is why you can play "Wii Sports" while sitting on your couch, swinging with one arm. On the PS3, by contrast, games can detect the absolute position of the controller relative to your body and the room around you.

Translation into gameplay? Table tennis and beach volleyball were a blast. Racket angle and backswing mattered; to make a diving spike save on the screen, I practically had to dive to the floor. On the other hand, Frisbee golf was incredibly frustrating, probably because I have terrible Frisbee throwing form in real life. ( Buh-bye, dominating in Wii golf and thinking I'm ready for the PGA Tour).

After the demo, I sat down with Move developer Richard Marks for a quick Q and A:

Motion control gaming became wildly popular with the Wii. In what ways is Move a response to Nintendo's success?

The Wii's success is something we're well aware of. But we've been working on this tech for 10 years -- through our Sony EyeToy -- and we wanted to make an input that was PlayStation worthy. Something that isn't very precise, that just isn't us as a company.

I like "Wii Sports." It's fun. But the second time I ever played the golf game I got 10 under par. The third time I got 10 over par. I was like, 'I didn't do anything different. Why is my score worse?' I felt like the game was random. That I couldn't get better and it didn't reward skill. We're trying to bring a new level of depth to gameplay.

What does Move mean for sports gaming?

It is a different input. Something like the existing "Madden [NFL]" is designed for a lot of buttons. What Move has  you can imagine  is stuff like drawing your own plays on the field. "Sports Champions" shows how individual sports like tennis, Frisbee, they're physically fun to play.

With team sports, I think that we have to conceive of a new way to play. I like basketball. That's my favorite sport. Think of yourself standing and watching the game, then pointing at a player and telling him what to do. It's almost like a real time strategy version of sports. I haven't seen a game like that.

Part of the fun of the Wii is that you don't have to have the motor control and timing of a pro athlete to do well. Move takes a different approach. Can motion controls be too precise?

It's totally true that precision does not equal fun. But when you give game developers good data and good precision, they can scale it up and down, decide how much they need. I think it's better that way. What we find is that when you first try a new game, if it's too hard, then it's not fun. But after you play for a while, if it's the controls aren't precise enough it's not fun because you can't get better. There's no skill. You have to be able to dial up the difficulty.

There's a certain set of people that don't want to learn all those buttons. It's probably a bigger set of people than those that do. But I think that having a lot of buttons is irreplaceable for some gaming experiences. There's a different set of experiences that you can't do without some kind of special input. Honestly, I don't think you' ll see either one vanish.