Compiling these All-Name Teams is even more fun than it seems. Though the time spent is seldom short, it normally qualifies as sport.

OK. We can't write poetry, but thankfully, others can. And in their honor, we present the All-Verse Team. 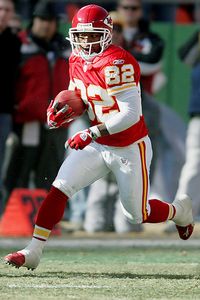 Tim Umphrey/Getty ImagesDante Hall was poetry in motion for Kansas City in 2003.

Daniel Bard: The flame-throwing Boston Red Sox reliever, author of 129 strikeouts in his first 117 innings in the Majors, might be best summed up by the Bard of Avon's "Romeo and Juliet," as his "speedy help doth lend redress" in trying circumstances. Had Bard been in Boston for the Manny Ramirez years, he might have been tempted to drop this line on the mercurial outfielder from "The Merry Wives of Windsor": "Thou art the Mars of malcontents."

Tom Browning: On Sept. 16, 1988, the Cincinnati Reds lefty was probably channeling the spirit of Elizabeth Barrett Browning, who once wrote to husband Robert Browning, "In every one point, every word and gesture, every letter, every silence, you have been entirely perfect to me." Tom Browning tossed a perfect game in Los Angeles against the Dodgers, who would be World Champions a month later. If not always perfect, the pitcher did have a fondness for neat numbers; he struck out 1,000 batters and started 300 games in his career.

Gosder Cherilus: The Detroit Lions' offensive tackle bears the last name of a Greek poet whose works often feted Athenian military victories. Legend has it that Cherilus' fellow citizens were so pleased with one such poem that they gave him a gold coin for every verse. Sadly for the Lion in autumn, there haven't been many occasions for that kind of revelry lately.

Parnell Dickinson: The quarterback from Mississippi Valley State beat Jerry Rice, the school's most famous alum, to the NFL by eight years. His career only lasted eight games, but he did get to be a part of history. He was a member of the 1976 Tampa Bay Bucs, who were shut out five times in an 0-14 season. In such times, the club might have turned to Emily Dickinson, who once wrote, "Find ecstasy in life; the mere joy of living is enough."

Dante Hall: The Kansas City Chiefs' wide receiver and special-teams superstar often escorted opponents through "Inferno." In 2003, this Dante became the first player in NFL history to return a punt or a kickoff for a touchdown in four consecutive games.

Homer Jordan: As far as Clemson Tiger football fans are concerned, this Homer's odyssey is far more epic than anything the ancient Greek penned. Jordan led Clemson to the 1981 national championship and a 9-1-1 record the following year.

Byron Nelson: Many golf historians will tell you the Texan was the greatest who ever played the game. And that was before the rise and fall of Tiger Woods. Hyperbolic sportswriters of the era called him "Lord Byron" after the British poet, citing the player's exemplary conduct on the course. Nelson won 11 straight tournaments in 1945 and retired a year later at age 34.

Will Rhymes: The Tigers' rookie has resonated with fans so far, hitting better than .300 after logging 655 games in the minors.