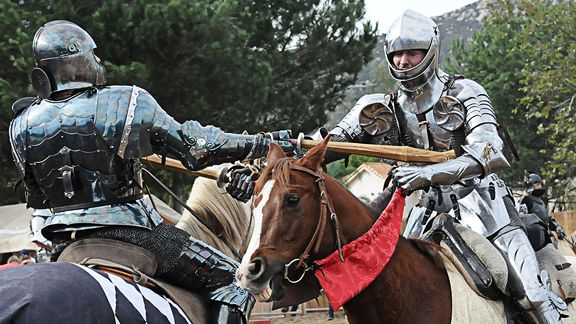 Chris StoneCompetitors showed up this past weekend in California to get dressed up and joust.

Ever since Lance Armstrong watched a dodgeball tournament on ESPN the Ocho, niche sports enthusiasts claim everything this side of cup stacking deserves a programming slot. And we've seen all kinds of variants invited onto the stage including roque, flugtag, kickball, wife carrying, over-the-line and punkin chunkin, just to name a few.

Flip through the ESPN family of channels in the wee hours of the night, and you're bound to catch poker, billiards, bowling, auto racing, and tractor-trailer truck pulling. So before you tell me a medieval pastime has no chance of seeing the light of cable TV, imagine the guy on the couch …

Feet kicked up, remote in one hand, longneck in the other. He watches as two dudes in armor race toward each other on horseback with 11-foot-long lances aimed at each other's vena cava in perfect HD quality on his 42-inch plasma.

Would he flip the channel before they made contact?

Inconceivable? Consider that this past weekend in Poway, Calif., competitors from around the globe flew in to face off in the fifth annual World Joust competition.

Known as the "Tournament of the Phoenix," the event featured a jousting session, a club tourney and poleax foot combat.

"What we're doing isn't groundbreaking," said Jeffery Hedgecock, competitor and tournament co-producer. "We're just reviving something that hasn't been around for like, 500 years. The allure is proven. Everybody loves a knight in shining armor." 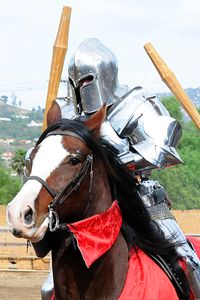 Chris StoneThe sport is a thousand years old, and these competitors are pretty serious about it.

Hedgecock and his wife, Gwen Nowrick, produce the only tournament in America affiliated with the International Jousting League and sanctioned by the Royal Armouries in Leeds, England.

"This tournament is gaining momentum," Hedgecock said. "You can't see a joust and not be intrigued by what you're watching."

Hedgecock and his Order of the Crescent teammates, Dominick Sewell and Tobias Capwell (who both live in England) stood reflecting on this year's competition and the sport's valiant history. They believe that the more sports fans are exposed, the sooner jousting will become another piece of the broad sports spectrum.

"If we had sponsorship, jousting could make for some really fantastic viewing programs -- and they wouldn't be on the History Channel, either, they would air alongside other sports and people would watch," said Sewell with methodical British intonation. "Imagine if Red Bull or Under Armour came out and sponsored this sport?"

The need for funding isn't to fatten the winner's purse -- there isn't one. Competitors in IJL-sanctioned events compete only for glory and a chivalry trophy.

"We believe prize money pollutes the purpose of the contest. It's a savage battle, but a sheen of gentlemanly behavior is preserved," explained the tournament's marshal of the field, Michael Carroll.

Competitors also foot their bills out of pocket, all for the love of the joust. "This is what we do," Capwell said.

By day, Capwell serves as curator of arms and armour at the Wallace Collection in London. But before you chalk it up to donnish intellectuals, consider the carnage that comes from a head-on collision of splintering lance on shield, and a hand-held club upside a steel sallet (helmet).

"Do you know how many meatheads come through here and love it?" asked Jeremy Smith of New Zealand. "Sure this is a King René style tournament, but you don't have to know or care who that is to want to watch us beat on each other."

Americans in particular might by spooked by the ye olde presentation they've come to associate with staged theatrical shows and renaissance fairs. But Smith insists, "There's no choreography; nothing is staged; and there are no personas or pseudonyms."

Across Europe, where people aren't strangers to castles in the countryside, there is a stronger connection to medieval history and jousting is more easily accepted as bona fide sporting contest.

"In Canada, it's even a little easier for people to form an attachment," said competitor Steve Gagnon of Quebec. "Coming from Normandy, you can retrieve the lineage. Many French Canadians are very pleased to discover jousting still exists today."

Tournament of the Phoenix competitors believe jousting should be grounded in the "real story of real people," which is why they stick to museum-grade garb. But the purists showed flexibility when considering the prospect of a big-time sponsor funding and televising a tournament on the stipulation that modern accoutrements be employed.

"What would have happened if jousting hadn't fallen out of fashion in the 1650s, what would it look like?" Capwell said. "By now, it would probably take advantage of all modern design techniques and high-tech materials. If you brought medieval knights into the modern world, they would love Velcro! They would love iridium helmet visors and polycarbonate! So, would we evolve if the sport had a real modern platform to compete on? Yeah. Why not?"

Mary Buckheit is a freelance writer based in San Diego. She can be reached at marybuckheit@hotmail.com.