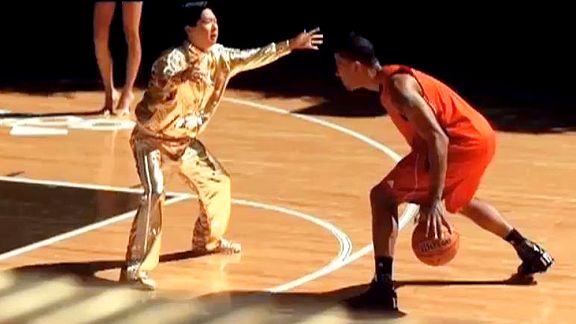 Mars Blackmon, Lil Dez, Lil Penny. There's a new sheriff in town. His name: Slim Chin. He is the blinged-out, gold-laminated, faux-Hugh Hefner who happens to always have Dwight Howard and Derrick Rose ballin' at his mansion.

Page 2 tracked down the actor, Dr. Ken Jeong, who brought Slim Chin to life, just to see if he had any idea that he'd given birth to pop culture's latest icon.

Page 2: So now your publicist calls? You are big time now. We used to be able to get directly through to you. Now you have "in-between" people getting back to us.

Jeong: Yeah, I've become [Slim] Chin now. So I'm rollin'. Sometimes you gotta live the character. Like Ted DiBiase when he was the "Million Dollar Man" back in the WWF days.

Who sold who on the concept of the character Slim Chin? Did you sell adidas or did they sell you?

I think it was a combination of both. I heard that my agent had been talking to adidas about a concept, and from what I understand adidas was thinking about me for a concept. That's what was relayed back to me. Personally, I wasn't involved with it at all. Initially, I think the plan was for it to be something viral or web based. We weren't exactly sure what it was going to be. And then [it] just got legs. Once they got Derrick Rose and Dwight Howard involved and once the concept was presented fully and everybody was on board, the spot really took off. And then they decided to make it a global marketing campaign. Which to this day still freaks me out. I had no idea it would be this big.

Is Slim Chin like a PG, slightly less gay version of Leslie Chow, the character you played in "The Hangover?"

That's hilarious! I got my start on BET "Comic View" doing stand-up and I really kinda think of that character as my comedy stand-up persona. But I loved how you said it. "PG version, slightly less gay." Maybe Mr. Chow can be a children's television cartoon in the future.

Man, that was all in the writers. That was all them. I was not allowed within 10 feet of the ladies. That was all computer graphics. All CGI, baby. That was Slim Chin getting freaky with the lady pyramid, not me. I wasn't even allowed to look at them shoot the lady pyramid. But my favorite part was being able to guard the players one-on-one. And talking trash to Derrick Rose. Telling him things like, "You better wake up and smell the roses." I did everything I could to make him laugh and to rattle him. But he was unshakeable.

So in the pantheon of character greatness that sell sneakers, do you want Slim Chin to exist alongside Lil Penny, Mars Blackmon and Lil Dez?

Just that fact that you asked that question is good enough for me. I never in a million years would have thought I would have had that question asked to me. I'm just so happy I was in an adidas commercial. It doesn't matter if I was Slim Chin, Double Chin or Chin in a Chinese telephone book, I'm just happy I was in a spot [commercial] with Derrick Rose and Dwight Howard. I never grew up saying, "Yeah I could be Mars Blackmon" or "I could be Lil Penny." That was never my career goal. [Laughs.] So, for me, you have to understand, I really can't believe any of this is happening.