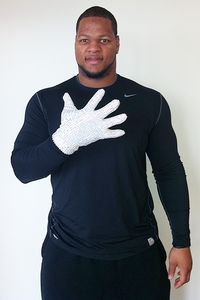 Even admitting that he's out for quarterbacks, does he take issue with being flagged for the hit on Cutler on Sunday?

"I don't know if I hit him too hard, or if I'm not allowed to hit him in his back, but as far as I know in the rulebook, hitting a guy with a shoulder, an arm, an elbow, whatever it may be, as long as it's not to the head, it's pretty much legal," Suh said. "It's a physical sport; physical things are going to come out. I didn't lead with my head to try to take his head off. I led with my forearm to try to take him down, to hit him at the top of his number, and it was perceived a different way by the refs.

"I'm 300 pounds going full speed. There's no way I'm stopping on a dime to avoid a quarterback or avoid any runner at that."

But dancing? That's another story.

"I love 'Bad,' being able to replicate his dance with that, but it's not easy at all," Suh said, saying he may use his Twitter account to show off his moves. "I'm going to go home and practice, and I might [tweet a video] of one of my dances trying to do it."

Fans can send photos or videos of themselves to Suh's Twitter account, and he'll select winners to receive an autographed copy of the game. They also can post the photos on the game's Facebook page.