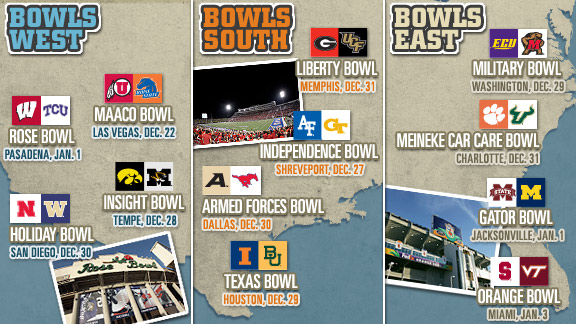 Think you've got all these bowl matchups figured out? Page 2 doesn't know it all, but it does promise that if you keep reading, you'll learn something about firearms, Liberia and a trade association representing beef producers.

Welcome to the 2010 edition of Obscure Bowl Facts.

Hawaii, Dec. 24: Features the teams with the shortest trip -- Hawaii's 11-mile drive to its home ballpark -- and the longest -- Tulsa's 3,827-mile flight from the dust bowl to paradise.

Independence, Dec. 27: Georgia Tech is home to a major research facility used by the Air Force. Cooperation. What a concept.

Texas, Dec. 29: This one involves two members of the George Herbert Walker Bush administration. Kenneth Starr, currently the president at Baylor, was solicitor general under Bush, whose chief of staff in 1992 was Sam Skinner (Illinois, 1960).

Pinstripe, Dec. 30: Call this the Vice Presidential Bowl instead. Vice president Joe Biden graduated from the law school at Syracuse in 1968. Kansas State's alums include Joseph Boakai (1976), elected to the No. 2 post in the Liberian government in 2004.

Sun, Dec. 31: Catholics vs. Convicts doesn't work anymore. So let's call this what it is: the only meeting of two private schools.

Rose, Jan. 1: Two schools with academic records befitting the Grandaddy of Them All: TCU and Wisconsin both check in at 968 in the APR. That's among the best in the postseason populace.

BCS National Championship, Jan. 10: Coaches in this game are only five years removed from the small time: Oregon coach Chip Kelly was the offensive coordinator at the University of New Hampshire and the Auburn offensive coordinator Gus Malzahn was the head coach at Springdale (Ark.) High School at this time in 2005.