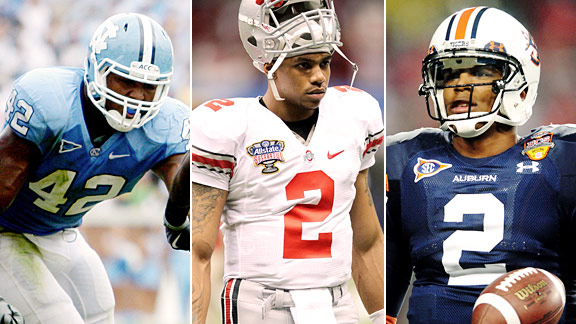 US PresswireMartin Luther King Jr. stood up for the poor, but who is going to stand up for student athletes such as Robert Quinn, Terrelle Pryor and Cam Newton?

One of the great things about Martin Luther King Jr.'s life is that one never has to ask what he would or would not think of something. From books to speeches to action, what King believed and why was documented with such clarity and moral resonance that one need not reach to invoke his memory. His work said enough.

So it is neither presumptuous nor lazy to look back at the year that was in the NCAA, a chaotic blend of bad ideas and bad intentions, to see one place where the legacy we're celebrating is both absent and needed.

This is not an attempt to look at the NCAA through the prism of race. In fact, the biggest problem with the holiday is our tendency to act as though King stopped working after the March at Washington. He had a dream, and he shared it with the world at the foot of Lincoln Memorial in 1963, but he also had a plan beyond basic rights. In May 1967, the Southern Christian Leadership Conference rededicated itself toward achieving economic justice for the poor. That November, it began planning to return to the nation's capital to express their grievances and their need for a fighting chance where it mattered most, in the nexus of capitalism: the job market.

ESPN takes a look at race and sports in America throughout the week, capped off by a National Town Hall Meeting on Friday, Jan. 14, from 6 to 8 p.m. ET on ESPN. "Outside the Lines" will focus on black leaders in sports all week at 3 p.m. ET. Coverage

This work, though left unfinished, is just as important to King's legacy as what happened in Selma and Birmingham. It was further expression of how fundamentally American his message was. The civil rights movement was about protecting the Constitution. By '67, King was protecting the ethos that governs at least 40 hours of most of our weeks: an honest day's work for an honest day's pay.

Then we have the billion-dollar world of intercollegiate athletics, in which "pay" for those on the ground is a dirty word.

By definition, college athletes are poor. The cost of going to school exceeds what athletic scholarships pay, and part-time jobs are hard to hold down when the NCAA limit of 20 hours per week of sport-related activity is routinely ignored. Unlike other athletes, they have no union to protect their interests. The closest thing to defense they have is their parents, an oxymoronic statement to make about someone older than 18.

They are the downtrodden that King worked to protect, working at others' behest while being dependent upon them for survival. Yet the loudest protests one will hear this week, or any other, about their peculiar world will be levied against the Bowl Championship Series.

On my radio show last week, I asked Dan Wetzel, Yahoo! Sports columnist and co-author of "Death to the BCS," why he and his co-authors chose to write that book rather than "Death to the NCAA." Wetzel, who agrees that the current system is problematic and that athletes should be paid in currency, was frank: He said they wrote the book that would sell. Presumably, in the eyes of the public, the lack of a "true champion" is the only injustice in college sports worth a movement.

That probably wouldn't surprise Martin Luther King. When King took his idealistic approach with basic human and civil rights, he was revered at home and abroad. But when King's worked expanded toward protecting the economic rights and futures of the poor, his popularity fell. His name was no longer among the 10 most admired Americans. Even though his message of love and fairness never changed, his reception certainly did.

Maybe the reasons behind King's decline in significance explain why scandals surrounding broken NCAA rules obscure the vulnerability of the so-called culprits. North Carolina defensive end Robert Quinn was ruled permanently ineligible for accepting gifts from a player agent, something an NCAA investigator was able to find out only after the lawyer UNC provided for Quinn advised him to turn over his phone records. Heisman Trophy winner Cam Newton saw his eligibility hang in the balance after his father and an alleged runner for an agent conspired to sell his services to Mississippi State. Five Ohio State players were suspended for selling awards they won on the field, a red flag of financial distress, then forced to promise to return for their senior seasons if they wanted to play in the Sugar Bowl (where one of those players, quarterback Terrelle Pryor, suffered an ankle injury that required surgery).

What's confusing is why so few speak on athletes' behalves. In spite of how nonsensical and unreasonable the NCAA's rulebook is, observers continue to side with it over compassion and common sense. Although compensating athletes wouldn't cause a tax increase for any fan, many will argue tooth and nail why those who risk their bodies for a loss should not be paid. They side with power over those totally incapable of fighting it.

"That is the question."

Bomani Jones contributes to the Page 2 blog and hosts "The Morning Jones" from 7 to 10 a.m. on Sirius 98, Hardcore Sports Radio.

Bomani Jones is a contributor to ESPN.com.